I received three beer-related books in this year’s Christmas stocking. One has proved almost impossible to put down, one I have merely flicked through, but I can see it is going to be an excellent and informative read and the other, well read on and see what you think.

First up is veteran beer bloggers, Boak& Bailey’s first book, “Brew Britannia”.  This excellent paperback is an entertaining run through of the strange rebirth of British Beer; a story which begins with CAMRA’s fore-runners the Society of Preservation of Beers from the Wood (SPBW), continues through the formative years of the Campaign for Real Ale, and concludes with the emergence of the “craft-beer” movement. The story, of course, continues today, and the fascination with and interest in beer, in its myriad forms and styles, which started in these islands, has now spread far from these shores to become the global phenomenon it is today.

“Brew Britannia” has a particular resonance for me, as I was around in those early days; admittedly not right from the start, but my involvement in CAMRA and my interest in beer and pubs in general does stretch right back to the early 1970’s; meaning I can identify with how the Campaign for Real Ale has evolved over the years. In some cases I either had direct personal involvement with what went on, or can remember being associated with, what at the time, were pioneering and ground-breaking events. It’s now just three days after Christmas, and I have nearly finished reading it; surely the sign of a good book, and I find myself asking why didn't I buy it when it first appeared last year?

The second book is veteran beer writer Stephen Beaumont’s excellent treatise on matching beer with food. Titled, surprisingly enough, “The Beer & Food Companion”, Stephen’s book carries on where Garrett Oliver’s groundbreaking “The Brewmaster’s Table”, published 2003 (I have a signed copy on my bookshelf), leaves off.

As I said, I have only flicked through this book, but it seems packed with fascinating tips and ideas for matching beers with certain foods, in much the same way as Garrett’s book did, but given the phenomenal growth of the global craft beer market, it is able to draw on a much wider range and variety of different beers. It will be interesting to compare these two publications side by side. (It’s worth remembering that despite what the wine connoisseurs tell you, beer often provides a far better accompaniment for many foods, than does wine, so why not find out for yourself and get hold of one, or both, of these books). 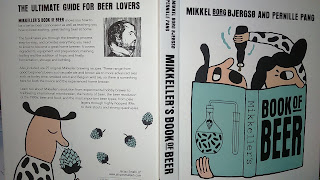 The third Christmas beer book I received is a dark horse, and one which is difficult to pigeonhole. However, I have a feeling it will grow on me over time. “Mikkeller’s Book of Beer” is written by legendary Danish brewer, Mikkel Borg Bjergsø and his wife Pernille Pang. Amongst other things it contains 25 original Mikkeller brewing recipes, along with instructions of how to brew “exciting, great-tasting beer at home.” Readers also get to learn about “Mikkeller’s evolution from experimental hobby brewer to trailblazing international micro-brewer.”

Confession is said to be good for the soul, so I will come clean and say that despite all the publicity and hype surrounding Mikkeller, I have never drank one of his beers. Actually, the reason for this omission from my own personal experience of world beer is  BECAUSE of the almost “god-like” status Mikkeller is held in amongst the craft beer “glitterati”. That and the exorbitantly high prices charged for his beers!

Some might say my schooling in the world of craft beer is therefore incomplete; and I would probably agree with them, but I have never been a person who just follows the crowd, and the bigger the hype surrounding something, the more likely I am to shy away from it. 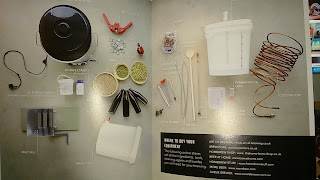 Things of course, can change and I am keeping an open mind on this. However, I was rather shocked when I learnt earlier this year, during a rather heated discussion at the European Beer Blogger’s Conference in Brussels, that Mikkeller does not have a brewery of his own, and is therefore a “gypsy brewer” using other people’s plant and equipment. This to me, shows a lack of commitment, and signifies someone who, whilst liking to experiment and play around with recipes, is not a person prepared to put his money where his mouth is.

A few weeks ago, fellow blogger Ed wrote a post, Entitled “Beer and Wanking”, in which he reviewed Mikkeller's book. You need to follow the link back, via Ed’s blog, to a comment on Stonch’s blog to discover the origin of the masturbatory reference, but in his post, Ed claims the book’s overview of brewing is “riddled with inaccuracies”, and that the “account of brewing history is untroubled by any of those annoying facts that get in the way of a good story.” He is most scathing though when he reveals that despite Mikkeller being a “gypsy brewer”, “he doesn't actually brew on other people's kit, as he considers the actual brewing to be just manual labour.”

Presumably Mikkel must have tried and tested the recipes he sends out to those “contract brewers” prepared to do his bidding, but the lack of a hands-on approach at the coalface, so to speak, has lowered my estimation of him even further.

As I said though, I will be keeping an open mind until I have finished reading “Mikkeller’s Book of Beer”, as who knows it might turn out to be the surprise find of them all, and what's more, given the right circumstances, I might be persuaded to try a Mikkeller beer!

I think Boak & Bailey might not be too pleased to be described as "veteran beer bloggers". But it is an excellent read.

Ha! No, flattered to be called veterans. Glad you've enjoyed the book, Paul.