At the weekend I arranged to meet up for a few pre-Christmas drinks with my old friend and long-distance walking companion, Eric. We headed over to nearby Tunbridge Wells, as there is little of interest pub-wise in Tonbridge, where we both live. Engineering works and a re-timed departure schedule meant trains were not running at their usual frequency between the two towns, so after a frustrating 30 minute wait at Tonbridge, we finally boarded a late running train and arrived at our destination some 10 minutes later.

We headed up the hill, as I had some tickets to collect from the town's Assembly Hall Theatre. We then walked along to Fuggles, but we could see through the clear glass windows that the place was absolutely heaving. We therefore decided to call in at the Opera House instead for our first drink of the afternoon. The Opera House is the JDW outlet in Tunbridge Wells and, as its name might suggest, is a pretty grand affair.

This imposing Edwardian building, which saw its last opera performed back in 1931, was purchased by Wetherspoon’s  in 1996, and turned into today’s successful public house. After several decades as a cinema, and then a bingo hall, the Opera House needed substantial restoration work, which the company carried out with their usual sensitivity and eye for detail, and whilst the upper seating areas (circle and private boxes), are not open to the public, the whole of the ground floor is, including the stage.The latter area has been converted to house a second bar and drinking area.

This was where we sat, both enjoying an excellent pint of Old Dairy Blue Top. We had timed our visit perfectly, as the lunchtime crowds had drifted off, and the evening drinkers had yet to arrive. So we sat there chatting and catching up with what had been going on in our respective lives.

After finishing our pints, we decided to move on, and the Grove Tavern, hidden away in the Tunbridge Wells “village area”, seemed the ideal next stop. En route we walked through Calverley Gardens, pausing to admire the ice-rink set up in the grounds for the benefit of seasonal revellers. This year’s December weather has seen record high temperatures, so I am sure the chillers must have been working overtime to keep the ice from melting, but the rink seemed pretty popular and looked suitably festive all lit up with Christmas lights.

We reached the Grove Tavern, which is reputed to be one of the oldest pubs in Tunbridge Wells. It was busy with a good mix of regulars; many of whom we recognised, plus a group of pool players. Landlord Steve and barmaid Sally were in charge behind the bar, and they had their work cut out keeping up with the steady demand for more pints to be pulled or poured.

Steve had four beers on the bar – Harvey’s Best, Taylor’s Landlord, Longman Blonde plus a seasonal beer whose name escapes me. I sampled both the Landlord and the Longman, preferring the former. I met up with a couple of old acquaintances, which was one of the reasons we stayed for a second pint. It was good to see the pub so busy, but this high level of trade seems to be the norm if previous visits are anything to go by.
We wandered down the hill towards the Pantiles; intending to call in at the Ragged Trousers. A look through the window revealed that, as in the case of Fuggles, the place was absolutely heaving, so instead we made for the nearby Duke of York. The latter is one of the oldest pubs on the Pantiles, but its star attraction as far as we were concerned is that it is now owned by Fullers, and sells the full range of the company’s beers.

The Duke has also had a successful makeover, with the bar being moved back to create a lot more space. Despite this there was still no room to sit down, so we stood at the bar admiring the highly professional way the manager and his staff conducted themselves and went about ensuring everyone was served as quickly and efficiently as possible. Beer wise we opted for ESB, as this legendary strong bitter is rarely seen outside of Fuller’s tied houses. I am pleased to report it was good and highly satisfying. Whilst in the pub, we bumped into my wife’s niece and her boyfriend who have become regular visitors to the Duke. Like us they live in Tonbridge, but again like us feel the need to travel over to Tunbridge Wells to drink in a decent pub.

They told us they had just come from the Pantiles Tap; a relatively new addition to the town’s drinking scene. The Tap opened just over a year ago, and I wrote about it here. Eric had not been there, and I had not been back since my initial visit, so wanted to see how it had changed. We ended up walking straight past it, as it is tucked away in what are the former cellars of the long vanished Gloster Hotel, (note the strange spelling).

Realising our mistake, we retraced our steps and descended down into this basement bar. It was busy, but we managed to find room at the bar. With sixteen beer lines (cask and keg),  it was difficult to decide which beer to go for. The young lad behind the bar helped us decide, and we opted for a dark beer from Northumberland brewers, Anarchy Brew Co. I thought the beer was a porter, but can find no porter listed on the company’s website, so perhaps it was one of their stouts. Whatever it was it was good, and whilst standing there drinking, we got chatting to Jo, the landlady who was sitting on our side of the bar.

It turned out she remembered me from my off-licence days, and possibly I remember her but, as with a pub, a lot of different people passed through the door of my shop, so it is difficult recalling them all. That aside, we chatted about beer related matters, and learned of the success Jo and her partner Geoff have had with the Pantiles Tap over the past year. The bar has mellowed nicely since last November, when I first called in, and the Tap is now firmly established as part of the Tunbridge Wells drinking scene. All three of us agreed that Tonbridge is crying out for a similar establishment, but the lack of suitable premises seems to be the main stumbling block preventing similar ventures from opening in the town. 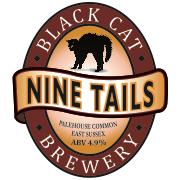 We finished with a beer from Buxton; possibly Axe Edge, but things were starting to get a little hazy by this time. We made our way back to the station, calling in at the Bedford for one last drink, (not that we really needed another one!). The final beer was Nine Tails, a 4.9% Old Ale from Black Cat Brewery.

Black Cat began brewing in 2011 on a 2.5-barrel brew plant in nearby Groombridge, but re-located under new ownership, to Palehouse Common in East Sussex. I’ve always enjoyed their beers, but they used to be quite hard to find. It was therefore good to come across a Black Cat beer so close to home, and it was certainly a good one to mark the end of what had been an excellent evening out.

Good write-up. Looks like I visited the one pub you didn't Paul !

Glad we weren't the people keeping you out of Fuggles.

We'll definitely get to the Pantiles Tap (and Mt Edgcumbe, also new to thw Beer Guide) in the new year.

What a change to read a positive post highlighting the plethora of pubs that still exist serving great traditional beer and full of normal people enjoying themselves.
I find much that is written in the beer blogosphere to be overwhelmingly negative and it's great to hear you anh an excellent day out with an old chum.
Thanks for your help in the summer on our Kentish walking tour - the two old friends I walked with and myself are all agreed it was the highlight of our summer.
Compliments of the season.

Thank-you for the kind words, Stanley. Saturday’s pub-crawl was good; albeit a little hazy towards the end! It’s always good meeting up with an old mate, especially when you haven’t seen one another for a while.

Glad you enjoyed the walking, back in the summer. I’ve wanted to get back out in the great outdoors myself, but both autumn and winter have been far too wet. I’m off work now for the next ten days, and am keeping my fingers crossed that things dry out a bit.

All the best for Christmas and New Year. Paul.