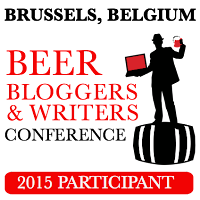 I finally arrived back home from this year’s European Beer Bloggers & Writers Conference, in the early hours of Tuesday morning; my journey, on Eurostar, having been delayed by flash-flooding in Northern France, and the inability of National Rail Enquiries to inform the travelling public that Charing Cross station was to be closed for the duration of the Bank Holiday weekend.

Small matter, and a couple of minor irritations, but with a heavy suitcase, full of lots of lovely beer bottles, I could still have done without them. The conference, along with the excursions which both preceded and superseded it, represented five days of superlatives which, as well as increasing my knowledge of Belgian beer by several orders of magnitude, afforded the opportunity to meet up with fellow beer enthusiasts, drawn from a variety of widely differing backgrounds and different countries. Mix this with an excellent conference venue, right in the heart of the beer-loving, cosmopolitan city of Brussels, some fine food, some equally fine beers and  good company, then what more could a beer lover wish for?

So, where to begin? Probably the best way is to give a brief over-view of the conference, which took place in the spacious and well-appointed setting of the Hotel Marivaux, a short distance from the Grand Place in central Brussels.

The event kicked off on Friday at 11.30am with Registration, followed by a Buffet Lunch, of typically Belgian Cuisine, with a variety of different beers and beer styles to accompany the food. Delegates then moved into the upstairs lecture theatre for the Conference Opening, to be addressed by a number of dignities, which included Phillippe Close, Alderman of Tourism for the City of Brussels, and Xavier Vanneste, owner of Halve Maan Brewery and President of the Belgian Family Brewers.

The afternoon was taken up with two quite different sessions covering the History, Present, and Future of Brewing in Belgium and Finding Content Beyond the Beer Review. Here we heard ideas from several successful bloggers and writers about how to develop content and how to engage more with your readership, so that they will want to return to your blog.

The afternoon finished with a Press Conference on behalf of the Belgian Family Brewers. The latter are a non-profit association of Belgian breweries which have been brewing beer in the country for at least 50 years without a pause. There are 22 members at present, and together they represent 15% of Belgium’s brewers, and boast a combined total of more than 3,500 years of experience in traditional brewing.

The Belgium Family Brewers were the elite sponsors of the conference, and as well as organising the previous day’s pre-conference excursion, entitled “Innovation Meets Tradition”, they also hosted Friday evening’s rather splendid dinner in the sumptuous surroundings of the Belga Queen. This is one of Brussels’s finest restaurants and, as at lunchtime, there was an impressive selection of Belgian beers to pair with the first-class food was presented to us.

Prior to the dinner though, and still at the hotel, we had the rather manic Live Beer Blogging Session. This involved 12 different breweries presenting one of their beers to groups of Bloggers sat at 12 separate tables around the room in five-minute segments. The idea was for participants to record their thoughts on the various beers on their blog, or via Twitter.

As I only had a Tablet and SmartPhone with me, rather than a laptop, there was no way I could do the event live. Instead I hurriedly scribbled down my thoughts and impressions of the breweries and their beers on good old fashioned paper. I thought this event was rather gimmicky, and I am sure that some of the brewers presenting their wares, thought the same way as well; but equally I am certain there were many others present who found it great fun, so who am I to judge?

After dinner the evening rounded off with a party, and yet more beer, at the well-known Delirium Café just off the Grand Place. This was my second time at Delirium, having first visited just over 10 years ago as part of a boozy day out in Brussels with friends. We occupied the upstairs’ room, which was rather hot and sticky, but it was good to mix amongst, and socialise with, fellow Bloggers, writers plus, of course, several of the brewers present at the event.

Things got a little hazy after that, but a group of us staggered along to specialist beer café, Moeder Lambic. I remember sitting at a table outside, enjoying a cool beer, and the warmth of the late summer evening. There was much talk of beer, but eventually it was time to find our way back to the hotel and some rather beery slumbers.

Last night I was drinking with someone who's brother's father in law is that Vanneste fella. Tenuous connection but coincidence nonetheless

Coincidence indeed, Jeff. Having now visited De Halve Maan Brewery in Bruges, I can confirm Xavier Vanneste owns a very nice piece of real estate in the heart of the city.

Btw. I can thoroughly recommend the brewery tour; an interesting mix of both new and old, and one of the best views going over the roof-tops of Bruges from the terrace at the top of the brewery. It certainly beats climbing the 366 steps of the Belfort Tower!