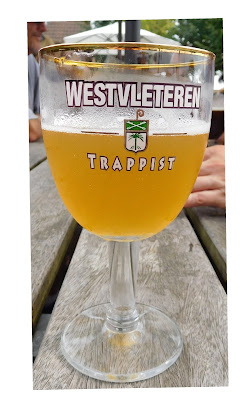 I felt more than a little hung-over on the post-conference Sunday morning, regretting what I knew was a bad decision to finish the previous night’s pub crawl of Brussels with a Westmalle Triple. (I’m talking about the European Beer Bloggers Conference, in case you hadn’t twigged). Still I was up sufficiently early to complete my last minute packing and to check out of the conference hotel before 9am.

The reason for the early morning departure was that I had booked on the two-day, post-conference excursion, organised by the tourist agency, Visit Flanders, and the coach was schedule to depart at 9 o’clock sharp. I said my farewells to those the new friends and acquaintances I had made, who weren’t coming on this particular trip, (there were two other excursions for delegates to attend, plus some people were just heading home), and boarded the coach.

The sun was shining as we set off through the streets of the Belgian capital, heading out towards the city ring-road and the E40 motorway. I know this road quite well, having travelled along it on a number of occasions whilst journeying to and from Cologne for a large trade-show (IDS), with some of my work colleagues. With the sun helping to lift my spirits and the increasingly flat countryside looking its best, as we drove towards Flanders, I began to feel human once more, pleased to be free of the confines of the city and looking forward to exploring this north-westerly province of Belgium in the company of my fellow Bloggers.

After 40 minutes or so, we turned off the E40 and headed off in a north-westerly direction towards the town of Leper (Ypres); the scene of so much fierce fighting during the Great War. With the sun beating down on the pleasant and peaceful countryside, it’s hard to imagine the carnage and slaughter which occurred here one hundred years ago. We skirted around Leper and before long reached the first stop on what promised to be a busy and quite beery day.

The town of Poperinge is the centre of hop cultivation in Belgium, but the hops grown in the surrounding fields are all that remain of a once much more extensive industry; one which met its nemesis during the conflict of 1914-18. The town was several kilometres behind the Allied front line, and we were told it became a resting place for battle-weary troops during all too brief moments of respite away from the fighting. No doubt there were many cafés to keep the troops refreshed, and also brothels and bordellos to allow relaxation in other ways!

Our coach dropped us at the "Hop Museum Poperinge", housed in a tall 19th Century building, right in the centre of Poperinge, and we spent a pleasant hour or so being shown around the various exhibits by Johan our guide. Hop picking in Belgium was much the same as I was in England, although the drying kilns seemed a lot less sophisticated than the traditional oast houses we have back in Kent. One difference was the hops were measured by weight, rather than volume and the pickers’ were paid accordingly. This led to all sorts of sharp practices; some a lot less savoury than others, whereby coffee or certain other liquids were tipped into the baskets containing the hops, in order to increase the weight.

After the tour, we were shown into the  "De Stadsschaal" café attached to the complex for a rather tasty rustic lunch; accompanied, of course, by some equally rustic and hoppy beer: the latter in the form of Poperings Hommel Bier. Suitably refreshed, we made our way back to the coach and continued with our trip around West Flanders. Johan, our guide from the Hop Museum, joined our party, although he later “jumped ship”, when his wife picked him up when we stopped at the Struise Brouwers in Oostvleteren – more about that later.

It was only a short ride to our next stop; the De Plukker Brewery attached to the hop farm of Joris Cambie. I have written a separate post here about Joris’s farm, the organic hops he grows and the excellent beer he brews in the on-site brewery so, apart from saying that farm, farmer and brewery were all very much part of the scene in this hop-growing region of Belgium, I will not repeat myself further.

After leaving De Plukker Brouwerij, our coach headed towards one of the most famous, but also one of the most reclusive Trappist Breweries, the Abbey of Sint Sixtus at Westvleteren. Our coach pulled up in the lane outside the abbey, and many of us wandered up to the gate. The gates, however, were firmly shut, not only to protect the monk’s privacy and preserve the atmosphere of quiet contemplation which forms an essential part of any monastic community, but also to deter those individuals who drive up to the abbey hoping to purchase beer.

Beer is sold weekly, in small quantities, from the doors of the monastery itself to individual buyers after they have reserved their order by phone. Sales are limited to one order every 60 days per person per license plate and phone number, and it is a matter of “pot luck” as to which of the abbey’s three beers are available. The type and quantity of beer available for sale are only revealed when order are placed, making the whole process very secretive. As the beers have increased in popularity, the number of 24-bottle crates per car permitted has decreased. For the highly sought-after Westvleteren 12, it is now limited to just one case.

Fortunately, for travellers like us there is one other official sale point for the beer, aside from the brewery itself. A short distance down the lane, and set back from the road, is the abbey-owned “In de Vrede”. This modern, barn-like structure acts as a cafe and visitor's centre, and all the Westvleteren  beers can be bought there for immediate consumption or take-away, depending on availability. However, as our visit took place on a warm and sunny late summer Sunday, the place was absolutely heaving, and there was no beer available for take-away at the shop.

Fortunately there was plenty of beer for the thirsty hordes. We managed to grab a couple of long bench tables outside and soon after a  waiter appeared to take our order. All three Sint Sixtus beers were available; namely Westvleteren Blonde (green cap), 5.8% ABV, Westvleteren 8 (blue cap), 8% ABV and Westvleteren 12 (yellow cap), 10.2% ABV.

Whilst many of my fellow travellers opted for the world-famous Westvleteren 12, (voted by Rate Beer as the “best beer in the world”), I decided to go for something lighter, in the form of the 5.8% Westvleteren Blonde. This was a deliberate choice as, however famous the12° beer might be, I did not wish to drink such a strong beer on a warm and sunny afternoon; especially as I knew there were two other brewing establishments to visit later that day, plus a dinner which invariably would include more beer! The other reason was I have never seen Westvleteren Blonde on sale anywhere else, so this seemed the perfect opportunity to acquaint myself with it.

I was extremely glad I did, as the beer was excellent; served as it was in a Westvleteren chalice-glass. Sitting out in the warm late summer sunshine, sipping this perfectly chilled blonde master-piece of a beer in the company of like-minded beer enthusiasts, reminded me, as it did in Franconia a few months previously, that life doesn’t get much better than moments like these.

I was reluctant to leave “In de Vrede”, and as we walked back to the coach through the large and virtually full car park, it was plain to see the obvious popularity of the Sint Sixtus “brewery tap”. I was also impressed by the amount of bikes we saw parked outside, and the number of cyclists out enjoying the late summer sunshine, but then this part of Belgium is so flat it invites itself to those who wish to explore it on two wheels.