Unfortunately, due to other commitments, I had to miss this year’s Canterbury Food & Drink Festival. The festival, which opened on Friday 25th September, acts as the official launch of Kent Green Hop Beer Fortnight. It is also the only location and occasion when all (or nearly all!) Kent Green Hop Beers are available in the same place at the same time.

All is not lost though, as there will be plenty more Kent Green Hop Beers available in local pubs and at other events after the festival. I was drinking Shepherd Neame’s version No.18 Yard, in a Maidstone pub, on Friday evening, (the opening day of the festival). I was there for a significant local CAMRA branch anniversary reunion; but more of that in a later post. I am also certain, that over the coming weeks I will come across more of these seasonal specials on the bars of various local pubs. One local pub, the Poacher & Partridge at Tudeley, is hosting its own Green Hop Beer Festival next weekend. I will try and get over, even if it’s only for a short while, as I’m flying off on the Sunday for my second visit this year to the Czech Republic. (More about that at a later date.)

The general public (but not readers of beer blogs), often wrongly believe that beer is brewed from hops whereas, as we all know, beer is brewed from malted barley (sometimes with the addition of other cereals), with hops providing the ‘seasoning’. Hops impart tanginess, bitterness and aroma, but when beers are brewed with green hops, the fact the hops are fresh and untreated means they are an unknown quantity. This combined with the influence of the weather, and other seasonal factors, on their growing period ensures the flavour of the resultant beer will be different each year. As brewers are normally at pains to ensure their beers taste the same every time, these factors add a variety and interest which would not normally be present. Because brewing with green hops can only be done during harvest, their use creates a very special beer with a truly unique flavour. 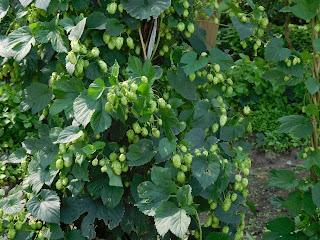 Hops are normally dried, prior to being used in brewing, in order to preserve their important flavouring characteristics, and to ensure the harvested crop lasts throughout the year. Green Hop Beer though, is made with fresh, or green, Kentish hops. The resulting beers have a characteristic fresh taste because the green hops used contain oils and other aroma compounds that are normally lost when hops are dried. The brewers make sure the hops are as fresh as possible by using them within 12 hours of being picked.

So far as taste is concerned, green-hopped beers have a definite resinous tang which is almost certainly due to the abundance of hop oils and other flavouring compounds. These are elements which are either diminished, or lost altogether during the normal drying process. There is a distinct mouth-feel to the beer, which is noticeable in the form of a slight furriness on the tongue and the roof of the mouth.

Brewing beer with freshly harvested hops has spread in recent years to other parts of the world, with a growing number of American brewers now producing what is known either as a “Wet-Hopped Beer” or a “Harvest Ale”. During my recent visit to Belgium for the Beer Bloggers’ Conference, we were given several “Fresh Hopped” beers to try. These were in bottled form, as we were a week or so away from harvest time when this year's fresh hop beers will be brewed. 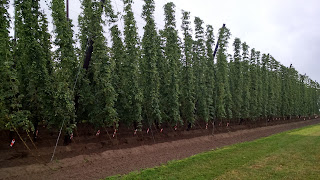 These “Fresh Hop” beers were generally very good, but on our visit to Joris Cambie’s hop farm, close to the town of Poperinge in the centre of Belgium’s hop-growing region, we were told by the farmer himself that several of the bigger brewers partially dry the hops first; so that they can be used a day or two later. This isn’t really entering into the spirit of “green-hopping”, and I told Joris that such beers would not qualify as Green Hopped beers in Kent. He agreed and told us that the fresh hop beer he brews, complies in every way. Mind you with 10 hectares of the finest organic hops growing on his farm, it would be difficult for him not to be using them straight away! 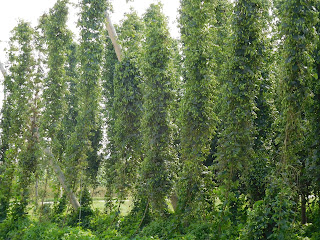 Returning to England; green-hoped beers are all about the heritage and future of the country’s hop-growing industry. This isn't just about grabbing a seasonal product while you can. English hops are in desperate need of a boost. Hop acreage has dropped from a high of 71,189 acres in 1878 to around 2,500 now, and this decline has been exasperated in recent years by the increasing popularity of hops from places like America and New Zealand.

The demand for the citrus and tropical flavours imparted by these hops shows no sign of abating, and is side-lining the earthy, floral, hedgerow fruitiness of traditional English varieties. Anything which helps reverse this trend, by encouraging an interest in our home-grown varieties, has to be encouraged and is surely worth the support of every English beer drinker.

For local readers and those planning to be in Kent during the course of the next two weeks, the complete list of  Kent Green Hop beers, along with tasting notes, can be found by clicking on the link here.

I'm fairly sure that I've never come across green hopped ale, but it sounds interesting. Unfortunately, Kent is a long way to go for a pint when you live in Merseyside!

Nev, whilst I appreciate that living in a region like Kent, where hops are traditionally grown, does mean Green Hopped beers are much more likely to be widely available; there is no reason why casks cannot be shipped to other parts of the country. All it would take is an enterprising free-house proprietor with a bit of savvy, hiring a van for a few days and driving down to this neck of the woods to pick up a few casks (pre-ordered of course). He/she could then make a real feature of offering a few Green Hopped ales in an area where they would be a real novelty, and potential crowd-puller.

I also understand that there are a handful of brewers in other parts of the UK producing Green Hopped beers, although I am uncertain as to how they get hold of the freshly harvested hops quickly enough to use them.

I suspect a trawl of the web will show if any Green Hopped beers are being produced locally to Merseyside, Nev. If there are any, they are well worth trying.