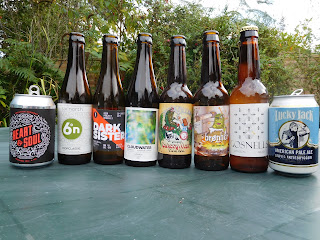 Well those good folk at Beer52.com have sent me yet another case of beers to review; the fourth such, totally un-solicited case I have received. I have gone on record stating that I don’t receive that many freebies, but this is becoming something of a habit!

I actually don’t like the term “freebie”, as everything has a price, and nothing in life is ever totally free. This case of beer is no exception, as in return for accepting the beers, I have agreed review them on behalf of Beer52.com. There are eight beers in total, from various European countries, including the UK, Belgium, Denmark, Italy, Norway and Spain. Here then are my thoughts on the beers.

Lervig - Lucky Jack – American Pale Ale 4.7% - brewed by the Lervig Aktiebryggeri in Stavanger, on the west coast of Norway, this Pale gold coloured beer has an intensely hoppy aroma, and hops are to the foe in the taste as well. Presented in a 330ml can, the beer is hazy as is unfiltered and un-pasteurised. Brewed using Amarillo, Chinook and Citra hops, this American Pale Ale is hop, rather than malt driven, but given its relatively low strength is quite quaffable.

Brewfist Caterpillar Pale Ale 5.8% - a collaboration brew between Brewfist of Italy and BeerHere of Denmark. Brewed using large quantities of Columbus and Moteuka hops; the latter coming from New Zealand. The inclusion of rye malt in the grist, contributes toffee and malt flavours which balance the hoppiness and give the beer body.

Amber in colour, with a slight haze, this is another very drinkable beer.

Cloudwater Grisette 3.5% -  a light and refreshing Saison-style beer brewed with a proportion of wheat and flaked oats in the grist and bittered with Perle hops. Eldorado, Willamette and Galaxy hops are added for aroma.

This very pale-coloured beer is the ideal summer beer, even though summer is now rapidly disappearing. Cloudwater Brew Co are based in Manchester, and are one of the city’s newest breweries.

Six˚ North Hopclassic Belgian IPA 6.6% - Six˚ North specialise in Belgian beers, even though they are based in North East Scotland. This beer apparently was the first brew the brewery produced, when they opened back in 2013. Pale gold in colour with plenty of juicy malt, balanced by a nice citrus-fruity bitterness. Bottle-conditioned.

Strangely enough, on my recent trip to Belgium,I was told there was no market in the country for strong, “hop bomb” IPA’s. This one obviously bucks the trend, and very nice it is too.

Brønher The Drunk Hop 4.7% - described as “large lager”, what ever that is, but this golden coloured beer is brewed with a mixture of Pilsner, Vienna and Carapils malts, and hopped with Magnum, Hallertau, Mittelfrüh, Citra, Cascade and Columbus hops.

The result an easy-drinking, malt- accented lager, brewed in the southern European style, in Alicante, Spain.

Vocation Heart & Soul 4.4% - a hoppy, session-strength IPA, brewed by Vocation Brewery, who are based in Hebden Bridge, Yorkshire. Packaged in an attractive, eye-catching, matt black can, this pale golden yellow beer pours with a slight haze. There are plenty of tropical frits present in the aroma and overall the beer has a fruity- hoppy taste.

A very drinkable and enjoyable beer, brewed at a sensible strength.

Brewed using the brewery’s Saison yeast to really bring out the spiciness, this beer ends on a dry finish. Unfortunately there wasn’t time on my recent trip to Brussels to visit the Beer Project, but several fellow beer writers did manage to make their way there and were very enthusiastic with what they saw.

Gosnells Mead 5.5% - I don’t think I’ve ever drank mead before, but I’m pleasantly surprised by this modern interpretation on this most ancient of drinks. There are floral notes in the aroma, with citrus fruit on the palate as a foil against the sweetness of the honey lurking in the background.

Brewed in Peckham of all places, by Gosnell's London Mead from just honey, water and yeast, this fresh take on mead is the perfect late summer drink. 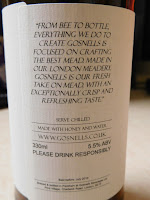 If you fancy giving the company a try, click on the link here to their website, then enter the code BAILEYSBEER10. This will get you £10 off your first box of eight beers, making it £14 instead of the normal £24. You will receive free delivery, plus a copy of the company's new craft beer magazine, 'Ferment'.

This 24-page magazine is an excellent read in itself being packed with interesting and informative articles about craft-beer, as well as containing background information about the beers in your case. 'Ferment' has come on in leaps and bounds since the last edition I saw, with much larger pages and printed on much higher quality paper. The issue I received (No. 15), contains articles by amongst others, Mark Dredge, Melissa Cole, Matthew Curtis and the Two Thirsty Gardeners. Dare I say it, but I found it more interesting, and packed with a lot more information, than CAMRA’s flagship Beer Magazine.

If you would like to send me beers to review, please be aware that I will give a totally honest opinion of your product. If I like it, then great, but if for some reason I don’t, then I will say so.

If the beer is not to my taste, but has been brewed correctly, and is not suffering from off-flavours, then I will again be honest. I will probably say that the beer in question is a good example of the style in question, but it just doesn’t float my boat! You can’t say fairer than that!