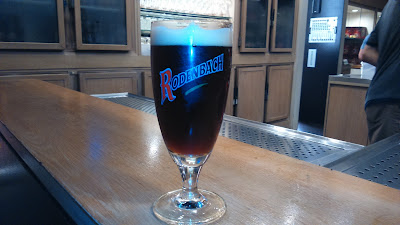 It was getting dark as our coach pulled in through the narrow gate of the Rodenbach Brewery. Our party of 15 had been on a whistle-stop tour of West Flanders and now, after an excellent meal at the Eetcafe Rodenbach in the centre of Roeselare, we had made the short coach journey across town to the world famous Rodenbach Brewery.

From a personal perspective, this was one brewery I had desired to visit for many years; having seen photos and read descriptions of the place in books by the legendary Beer Hunter, Michael Jackson and beer writer Roger Protz. What really inspired me were the photos, taken in the brewery, of row after row of massive oak vats, all containing beer which was quietly maturing away.

I probably wasn’t quite so keen on Rodenabch after I tasted their beer for the first time, during the early 90’s, but back then my taste buds weren’t as mature as they are today. Also, sour beers were a completely alien concept, as far as I was concerned sour meant “off”. Little did I know!

Rodenbach is probably the most famous of the Flemish Red-Brown Beers, which are a blend of young acidified, mature acidified and oak-matured beer. This long maturation in oak casks lowers the pH of the beer and gives it a longer shelf-life. The sour beer imparts a complex and agreeably refreshing flavour, thus imparting this blended beer with a distinctive edge, and making it the perfect aperitif.

It is worth mentioning briefly, that hops are used quite sparingly in the production of these types of beer, and Rodenbach is no exception. Bitterness does not sit well with sourness, so hops are primarily used for their preservative properties, rather than for any flavour they might add to the finished beer.

The normal Rodenbach is a blend of 75% young beer and 25% aged beer. Another beer, called Rodenbach Grand Cru, is a blend of 34% young beer and 66% old beer. Not surprisingly Grand Cru has a much more pronounced sourness, and is much sought after by beer connoisseurs.  In addition, they have a Foederbier, which is a 2 year old beer drawn   straight from the maturation cask, or "foeder". It is only available in a few select outlets.

After we had disembarked from the coach, we were met by Brewmaster Rudi Ghequire in the brewery yard, and before going inside we were given a short introduction to the brewery and its history. Rodenbach can trace its history back to 1821, when the four Rodenbach brothers (Pedro, Alexander, Ferdinand and Constantijn), who were originally from western Germany, invested in a small brewery in Roeselare. The brothers formed a partnership to run the brewery, which lasted for fifteen years, until Pedro Rodenbach and his wife Regina bought out the other three partners.

In 1864 their son Edward took over the brewery and business prospered considerably under his stewardship. Edward's son, Eugène, took over in 1878, having first travelled to England where he learned how to mature and ripen beer in wooden vessels, and how to then blend old and young beers to make a drink which appealed to the public. The skills he acquired in regard to the maturation of beer in large oak casks, or “foeders” (maturation casks), were instrumental in producing the beer that Rodenbach became famous for; and the company owes Eugène Rodenbach an enormous debt of gratitude for the unique quality and character of its beers today.

Some brewery historians have speculated that Eugene may have learned these skills at the Greene King Brewery, in Bury St Edmunds, where a blended beer called Strong Suffolk Ale is still produced. Strong Suffolk Ale is a blend of two beers, BPA - Best Pale Ale and Old 5X. BPA comes in at 5%, but Old 5X registers 12%. Old 5X is matured at Greene King, in three huge wooden vats for a minimum of two years.

A few years ago, at the Great British Beer Festival, Greene King made a few casks of Old 5X available for people to try. It was well worth queuing for half an hour to enjoy a sample of this historic beer (third of a pint only). Its slight sour background, contrasted with the rich malty sugars still present in the beer, and the whole thing reminded me very much of a glass of fine Oloroso Sherry.

The vats at Bury St Edmunds are not dissimilar to those at Rodenbach, which is probably what prompted speculation about a link between the two breweries; but after consulting the brewery archives at Rodenbach, Roger Protz found no trace of such a connection. Instead, he proposed the brewery of John Barras, in the north east of England, as a more likely contender for Eugene’s apprenticeship.

Eugene produced no male offspring, so a public limited company was created, with most of the shares remaining in the hands of descendants of the Rodenbachs. This arrangement lasted until 1998 when the current generation, having lost interest in running the brewery, sold it to the family-owned Palm Brewery.

One of the first things Palm did when they took over was to upgrade the brewing equipment so they could increase capacity, quality, and efficiency. The old 19th Century plant was on its last legs, due to a combination of inertia and lack of investment, so in 2002 a shiny and new brew house was opened to replace the old. We didn’t go inside, but could clearly see the glistening stainless steel, state of the art brewing vessels through the modernistic glass fronted building

Towering over the brewery is the impressive and quite dramatic-looking malting kiln. Up until fairly recent times, Rodenbach malted their own grain, but today, the brewery has far outpaced its ability to malt its own grain efficiently and has it custom malted by a large Belgian malt house. We were allowed inside the kiln, which has now been converted into a museum piece for the brewery.

Impressive though the malt kiln was, the real highlight of the whole brewery tour/experience was the world-renowned cask halls with their 294 oak vats or “foeders”, some of which are 150 years old. They are recognised as part of the industrial heritage of Flanders, and are protected as such. The halls are interlinked, and we walked through several, pausing to admire these massive structures which towered over our heads.

Part way through our journey through these halls, Rudi turned off and led us into the company cooperage. Here there were wooden staves and boards in various degrees of conditioning being turned into lids or staves. Rodenbach employ two coopers, who carefully select the oak for the foeders so they can control this vital part of the maturation and hence flavouring processes of their beer. The coopers also check each foeder on a regular basis, to make sure here are no leaks, or other damage present.

Finally we arrived at Rodenbach’s event and hospitality centre which is situated at the end of one of the cellars. Here we were given a glass of either standard Rodenbach, or Grand Cru. I opted for the former, and very nice it was too, with just that subtle edge of sourness providing a refreshing edge to the fullness of the dark red beer. I probably could have tried the Grand Cru as well, but it had been a long day and the hour was getting late. Despite his infectious enthusiasm for Rodenbach’s beers, our host undoubtedly wanted to get home to his family, and we had still to complete our journey to Bruges; where we were to spend the night. Under the circumstances that cool, thirst-quenching glass of Rodenbach sufficed and I drank up more than satisfied after an amazing, and long sought after brewery visit.

I am certain that none of the 15 of us, present on that tour, could have failed to be impressed by the care, tradition and heritage of what we experienced at Rodenbach. The visit will certainly live on in my mind as one of the best and most fascinating brewery tours I have been privileged to have been party to.