Not only is it an over-worked cliché, it’s also one I don’t normally care to use – think sales conferences, self-improvement seminars, or anything of a similar ilk that originates from across the pond (another awful cliché), but on this occasion it’s more than a little appropriate.

If you haven’t already guessed the phrase I’m referring to is, “Walking the Talk,”, and on the first day of the recent EBB post-conference excursion, my fellow beer writers and I were fortunate to meet someone who is doing just that! Joris Cambie is a farmer and now also a brewer, who represents several generations of hop growers. He cultivates around 10 hectares of hops on his farm, which is situated a short distance from the town of Poperinge in West Flanders.

Poperinge is the centre of hop cultivation in Belgium, but the hops grown in the surrounding fields are all that remain of a once much more extensive industry; one which met its nemesis during the conflict of 1914-18, which saw this pleasant, but unremarkable corner of Belgium, turned into the killing fields of Europe as its royal houses sacrificed the flower of a generation in a bid to sort out their petty differences and vain ambitions.

Ghastly though the Great War was, it wasn’t wholly responsible for the loss of this once important agricultural activity; as Joris explained to our group as we sat listening in his hop shed-cum-brewery. The real reason for the decline of hop-growing in this part of Belgium is that the soil is so good that farmers can grow virtually anything. Contrast this to Germany’s famous Hallertau region; the largest continuous hop-planting area in the world. Here, according to Joris, the soils are poor and sandy, and hops are one of the few plants which will grow here.

I don’t know how true this is, but it seems plausible, but I do know that Joris grows a mix of aroma and high alpha hops, which include the English varieties Goldings, WGV, Pilgrim, Challenger and the American variety Cascade. At the time of our visit, the hops were nearly ready for harvest, and it was good to walk right up to the edge of a hop-garden planted with Cascades, and see the tall bines laden with their abundant green cones; all just ripe for picking. 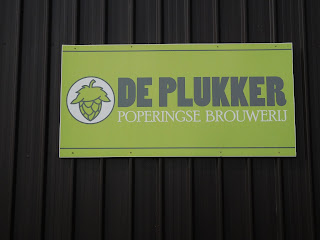 Somewhat surprisingly Joris' hop farm is a member of English Hops; the largest hop growers co-operative in the UK. Joris claims he gets a better and more stable price by selling his hops through this organisation, which are based just down the road from me, in Paddock Wood, Kent. All hops grown on the farm are 100% organic, and Joris explained to us all the extra work which this entails.

You would have thought that growing hops was a demanding enough business on its own, but Joris thought it would be good to utilise some of the farm’s hops in the brewing of beer. To him, this seemed a natural progression, but the local bureaucrats had other ideas. Joris was told that brewing constituted an industrial activity, whilst he was situated in an area reserved for agriculture. Undeterred, Joris continued with his plans and even committed to grow a certain amount of barley, which could also be used in the brewing process.

The town-hall bureaucrats had obviously missed the point that within living memory, many farms in this part of Belgium, and also in neighbouring France, had brewed beer; primarily for their workforce, but also on a semi-commercial basis. In the end Joris won the day, and in November 2011 brewing commenced on a fairly small-scale to start with, in a shed on the hop farm that had formerly been used to pick and dry the hops in. Some modifications were necessary to meet food safety regulations for many decades, but De Plukker Bier proved popular with local inhabitants and production slowly increased as the market for the farm’s beers began to expand. Output today is around 650 litres every three weeks, but bottling and labelling continues to be done by hand. All the beers are unfiltered, un-pasteurised and bottle-conditioned.

During the introductory talk, we were given a glass of De Plukker’s most popular beer, the 6.1% ABV, Keikoppenbier. This is a blond, top-fermented ale which uses three varieties of hops (Admiral, Golding and Cascade), to give the beer its distinctive hop aroma and to provide a good balance with the malt base. We then moved back outside for a look at the nearby hop-garden, where Joris continued his talk on the joys, as well as the pitfalls of hop-growing.

Back inside the shed, we were treated to one of the brewery’s other beers; namely Rookop, a 6.5% ABV Brown Belgian Ale which until 1963 had been brewed by the St.-Joris Brewery in the village of Reningelst. This beer is brewed with Admiral and Golding hops, and is fruity and sweet with some chocolate notes.

Every year the brewery celebrates the end of the hop harvest by brewing a beer which includes all the hop varieties grown on the farm. In 2014 these were Goldings, Pilgrim, Cascade, Challenger and WGV. The resulting beer is called "All Inclusive IPA”: the “All Inclusive” referring to the fact that all the farm’s hop varieties are used in the beer. Last year’s beer weighed in at 8.0% ABV.

For me, our visit to Joris’s farm and the De Plukker Brewery was one of the highlights of the trip; even though there were several more superlatives to come that day. I am almost ashamed to admit that despite having been an avid beer drinker for the past forty or so years, a former home-brewer and someone who takes a keen interest in all things brewing, that this was my first ever visit to a hop farm. It’s even more incredible when you consider that I live in Kent; one of the premier hop-growing regions of England!

It was however, well worth the wait!

Oh Paul. Oh dear. If you sincerely think that the Great War was due to the ambitions of the Royal houses of Europe you really do know nothing of early 20th century history. I mean I really don't know where to start on putting you right. Even the biggest critic of hereditary monarchy would not subscribe to such a view as expressed by you. It just isn't a credible position.

In some ways the reverse was true - the fact the war began the way it did demonstrated, among other things, how little control over affairs the Royal houses had, and how a new order that noone really understood had arisen. Certainly Wilhelm and Nicholas wanted to avoid it and confided such in one another in a very sad display of their own impotence on the very eve of conflict. But the military and industrial powers in their country had already set the wheels in motion.

I appreciate this is a beer blog but I just don't feel ignorance like that can go unchallenged. Sorry to be so blunt as you're nice.

Not a problem Jeff and no offence taken. I’m at work at present, so will respond in greater detail later on today. You may be surprise to learn though that I know rather more about early 20th Century history than my remarks on the causes of the Great War suggest! Paul.

Jeff, as promised here is my more detailed response to your earlier comment. To put the record straight history is one of my other interests. I wouldn’t quite describe it as a passion in the same way that beer or walking is, but your dismissal of my knowledge of early 20th Century history is still way off the mark.

I admit that I was somewhat flippant in my dismissal of the Great War as a squabble between the royal houses of Europe, but the post was about hop-growing and the conflict was one of the major reasons for the decline of this activity in Belgium.

I have read quite extensively on the events which led to the outbreak of the First World War, even though this is a subject on which historians still disagree to this day. I am well aware that at the eleventh hour, the Kaiser tried to pull back from the brink, but found himself outmanoeuvred by the military, and others. I remain uncertain about Czar Nicholas’s role; he ruled as an absolute monarch, and his word was law, but he also seems to have been weak and possibly open to manipulation.

Wilhelm though was more duplicitous and does share some responsibility, however unintentional, for the conflict. His dismissal of Bismarck as Chancellor was a major faux pas and this, combined with his posturing and sabre rattling, led to Germany becoming isolated and surrounded by potentially hostile powers. His decision to massively expand the German navy caused a head on arms race with Britain, which drive his uncle (King Edward VII), to seek an entente with the country’s old enemy, France. Thus two nations, Britain and Germany, with two centuries of ties between them, due to their royal households (Hannover & Saxe-Coburg and Gotha), found themselves on opposite sides of the fence.

I could go on, but another time and another place, preferably over a pint or three! This is, after all a beer blog, and the subject of hop-growing was supposed to be the main point of the post.