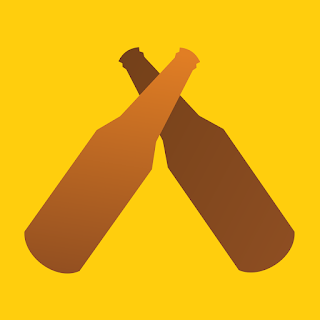 I’m fairly sure that I’ve never awarded a beer on Untappd before, with a rating of 5.0. I know that there has to be a first time for everything, so going by the law of averages, it has to happen sometime, but the beer in question was so good, there was no way that I wasn’t going to award it with the highest rating possible.

I’ll come onto the beer in a minute, after a few paragraphs about Untappd, and my experience of the world’s best known electronic beer ticking app. American in origin, but popular on this side of the Atlantic as well, Un-tapping” beers has become a favourite pastime for many drinkers. The App initially found favour amongst the craft-beer faction, but with the passage of time has found increasing popularity amongst cask drinkers as well.

I wrote a post about Untappd, back in 2015, in which I claimed that the world of beer-ticking had moved on from the days of scruffy, barely legible lists, maintained in tatty old exercise books. I stated that with the advent of the Smart Phone, and the growth in associated Apps, electronic versions of “ticking” were now available, bringing the “delights” of this hobby/obsession to a completely new audience.

I first tried Untappd back in 2013-2014, but gave it up after a short while, primarily for phone-related issues. There were other, more mundane reasons too, such as I forgot to use it or sometimes, I just couldn’t be bothered. I picked up with the App at the start of 2020, after buying a new Smartphone over the Christmas period. My trusty old Galaxy J5 was out of space on its hard-drive, in fact, it was so clogged up that I couldn’t install updates, or even run certain apps. 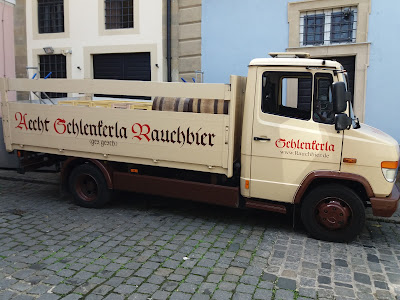 As well as updating my phone, I took out a new, SIM-only phone contract which came with an enormous (for me) amount of free data, which means I don’t have to worry any more about poor Wi-Fi. Not being able to connect to Untappd in real time, when the pub or bar hadn’t got Wi-Fi, or if it did, the quality and connectivity was poor, was the main reason for me ditching the App, but that’s no longer a problem.

I re-installed Untappd, and found, to my delight, that after all that time, my old account was still there, fully operational and enabling me to pick up from where I’d left off. It’s currently listing 438 beers that I’ve tapped, and whilst I’ve obviously ticked far more over a lifetime of beer drinking, that number is a good starting point – as long as I remember to “tap” them! 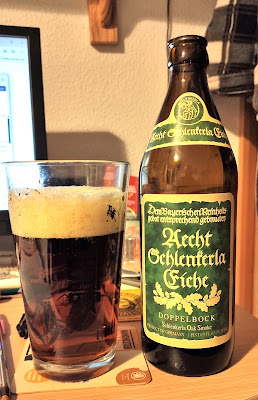 So, what about this beer with the five-point rating?  Well it’s Aecht Schlenkerla Eiche –  an 8.0% abv Doppelbock, brewed by Bamberg’s famous,  Schlenkerla "Heller-Bräu" Trum Brauerei. I purchased the bottle at Fuggles Bottle Shop, in Tunbridge Wells, and opened it the other evening. Dark mahogany in colour, this stunning beer is packed with the flavours of intense, chewy, toffee malt, set against a background of oak smoke, and it is oak that is the key here. The majority of Franconian Rauchbiers (smoke beers), are brewed from malt that has been dried in a kiln that is fired with beech wood. Smoke from the latter, imparts an intense smokiness to the dried malt which carries through into the finished beer.

Eiche, is the German word for oak, and the malt for this Doppelbock beer, is kilned with oak wood, rather than beech. This imparts a much more subtle flavour, which allows the toffee and caramel notes from the malt, to shine through. The result, an absolute stunner of a beer that is well worthy of that rare 5-point, rating. 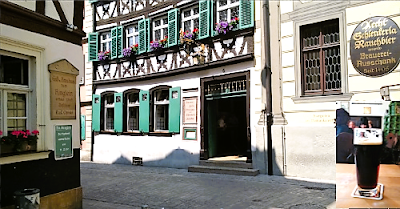 Looking back over past blog posts, this wasn’t actually my first taste of this beer, as during December 2010, I enjoyed a glass of it on its home turf, in the atmospheric surroundings of Heller-Trum’s, world-famous, Aecht Schlenkerla tavern, in the heart of Bamberg’s old town.  I wrote at the time, how I’d popped into Schlenkerla where I was able to sample the strong Christmas Doppelbock called Eiche. I described this stunning dark beer as very moreish, but at 8.0% abv, I thought it unwise to have more than one! 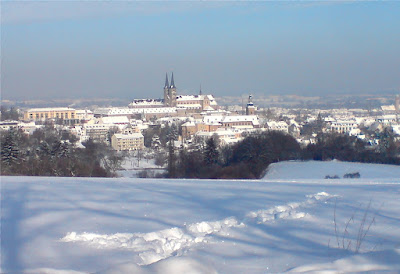 That particular year, Bamberg was blanketed with a thick carpet of snow, which added to the Christmas feel of the town and the surrounding villages. December was also an apt time to visit, as Eiche Doppelbock is only available during the festive season, and thus is a true Christmas beer. I’m not sure how Fuggles got hold of their stock, but I'm glad that I did, although I imagine that it’s all sold out by now. 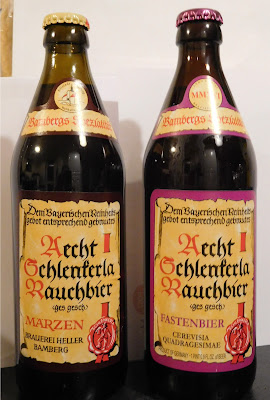 My most recent visit to Bamberg, took place four years ago, in May 2018. On that visit I was able to buy a couple of bottles of the brewery’s Fasten Bier, or Lent beer.  This seasonal Ur Bock weighs in at 6.5% and is like a stronger version of the brewery's normal strength beer but is sufficiently well-hopped to balance the additional body supplied by the malt. I wasn’t using Untappd back then, so it’s hard to know how I would have scored the beer, but given Schlenkerla’s pedigree and heritage, I imagine it would have been a high rating.

That’s it for the time being, but if you are a fan of smoke beers, keep an eye out for Heller-Trum’s excellent versions, as the brewery is now exporting its beers all over the world.

I don't think there is a greater beer experience than standing in the street in front of Aecht Schlenkerla tavern with a rauchbier in hand. I cannot wait to go back.

As an American GI I spent many a Happy Hour in the Schlenkerla during the height of the Vietnam war - at the Staammtisch no less.The Trumms were very kind to me and I was even given a private tour of the brewery in the days when a kulhschiff was still in use.
Wife and I have been back numerous times. Found your blog when surfing about gravity dispensing. The brewer at Heller (Christian Trumm) said that the advantage of the keg system (alles, the dread word) was that there wasn‘t excess kohlsauer and the volatiles didn‘t go gas diluting flavor and aroma. The kegs are now lined with plastic and I have often felt that a tiny taste of rosin was missing as well as some favor the kuhlschiff imparted. Still a fabulous beer, just a little different.

Craft brew in USA shoots itself in the foot with large tank dispensers and stale beer .

Liked picture in the Schmausen Keller. Wish I was there today.