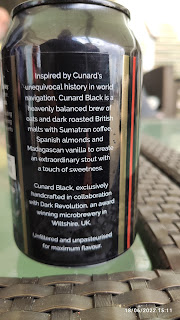 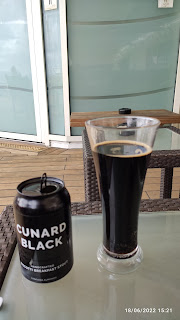 I could get quite used to a glass or three of this excellent "Breakfast Stout," sold onboard ship as Cunard Black. It's available mainly in cans, although the other afternoon I enjoyed a hand-pulled pint of this excellent dark ale, in Queen Mary's onboard pub - the Golden Lion.

I wrote about the beer, after the previous cruise, which we undertook last September, although I don't recall seeing a draft version, back then.

For the beer geeks amongst you, Cunard Black is an oatmeal stout, brewed by Wiltshire brewer, Dark Revolution, to a strength of 5.7%, and is stated to include, coffee, almonds and vanilla in the mix. 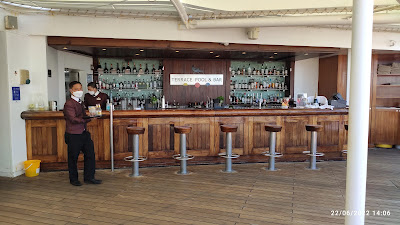 The beer is available at various locations around the ship, as well as the aforementioned Golden Lion. The hand-pulled version may well be cask, and I intend to write some more about this' later on, but my favourite spot was the Terrace Bar, at the stern end of Deck 8, overlooking the swimming pool.

As in the photo, Cunard Black is only available in cans, away from the pub. It might be heresy for a former CAMRA member to say so, but I actually preferred the can version to the cask, especially as the former was invariably served, slightly chilled. The beer is definitely well worth checking out, in the unlikely event you encounter any of it ashore, but you never know!

There's a handpump on board the Queen Mary ?

Not just one, but two! The second dispenses the Cunard Red Ale, that I haven't tried yet.

The pumps are in the Golden Lion, the ship's onboard pub. We sat at a table the other day, as we were having lunch, but you can sit at the bar, American style, so I will try this before we finish our voyage. That way I can verify that the pumps are genuine, although I'm fairly certain the bar man was pulling the handle, to dispense my pint, when I watched him from afar.

Not sure it will qualify for the GBG, though! 😁

That's right, as in all the best American bars. It's fine, as long as these bar-hoggers don't block access to the bar, or prevent people from seeing which beers are on sale.

Definitely proper hand pumps. Beer slightly hazy, well conditioned, but on the warm side, so assuming it's cask conditioned.

Full report when I get home 🏠

"Cellar skills need attention" - and a word with the pilot to take a steadier course ?

Yes Paul, along with a plea to avoid choppy seas! 💨

If it's warm, it's definitely cask !