Let's get this party started 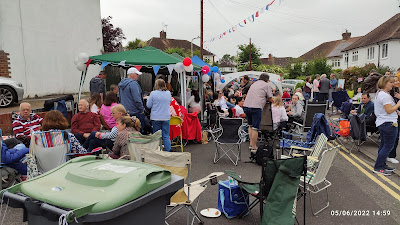 After stating in my previous post that Mrs PBT’s and I were going to be keeping low profile, on Sunday afternoon we broke our purdah and headed out, to the bottom of our road for the local street party. There have been quite a few of these events during the 28 years we have lived in our road. Most have celebrated royal events – Jubilees and weddings in the main, but one memorable street party was held in honour of the Tour de France, cycle, endurance race, which that particular year (2007), came through Tonbridge. 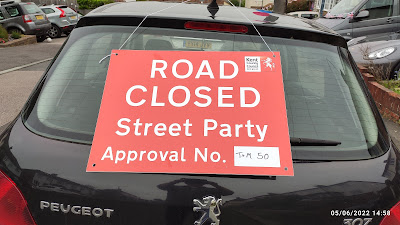 That particular party had a very Gallic theme to it, with plenty of French cheeses, bread, and wine, plus the odd stereotyped French onion seller stand-in, but it was a good do, nevertheless. The other parties have also been enjoyable, and irrespective of one’s views concerning the Queen and the Royal Family, they have provided the perfect opportunity to meet up and reconnect with one’s neighbours.

Tonbridge is a commuter town, with many residents making the 40-minute rail journey to London and back. In the wake of the pandemic, a growing number have ditched the commute, and are now working locally. The pay might not be quite so good, but when traded off against high rail fares, the misery of crowded trains plus time spent travelling, the local option comes out on top. 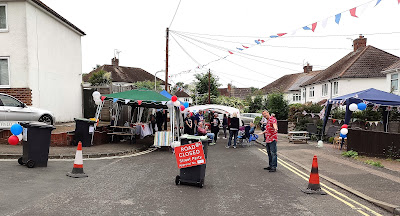 This year was especially poignant as there were many families up and down the road who we hadn’t seen since before the pandemic. There have also been a number of new families who have moved in, since the last party (2019). Having lived in the road, for the best part of thirty years, Eileen and I know the organisers of these events, and like others were glad to contribute food and drink. Residents were contacted prior to the party and asked to indicate the type of food they would be bringing, primarily to ensure the event wouldn’t be swamped by dozens of sausage rolls, and very little else! 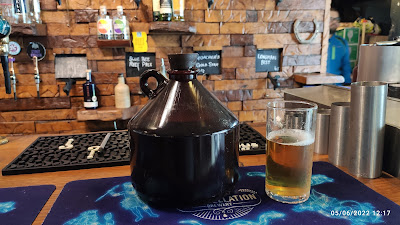 As far as the beer was concerned, I popped along to the Beer Seller in Tonbridge, arriving shortly after the midday opening. There was already a handful of customers in the pub, and I couldn’t help noticing a line of trellis tables running the length of the pub, laden down with buffet type food, in preparation for the Beer Seller’s own party. I’d already made up my mind which beer to go for, but I bought myself a swift half, just to make sure. Goacher’s Gold Star is a regular beer at the Beer Seller, and it was certainly in fine form last Sunday. So, after enjoying my half, I treated myself to a 4-pint Karry-keg of the beer. 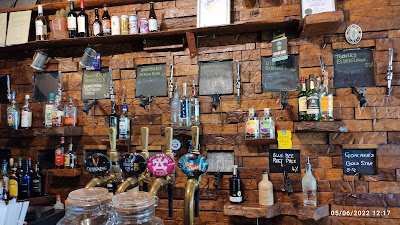 Our road runs down a hill to a “T” junction, where it joins a road called Royal Avenue. To the right, the road runs round in a loop to allow vehicle access to the rest of Tonbridge, but to the left, Royal Avenue ends in a cul-de sac. It is in this section that the various street parties have been held over the years.  Sunday’s bash was no exception, and despite a chilly start and grey, overcast skies the party got off to a swinging start.

Mrs PBT’s and I arrived just before 1pm, having brought a couple of garden chairs plus a cheese platter, to the gathering. The cheese was our contribution to the party, but it’s safe to say there was no shortage of food. Star food offering, was a large bowl of chicken biryani, prepared by an Asian family who have recently moved in. Staying with the international theme for a moment, we were introduced to a Japanese lady, who moved in, along with her family, several doors up from us. 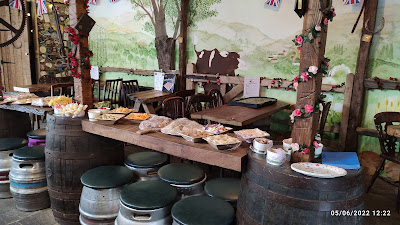 We had watched with interest, the construction work that had gone on, both before and during the pandemic, that added an extra storey to their bungalow, but the common interest was both her and me working for Japanese companies. We were also introduced to a chap from the other end of the road, who is a close friend of Eileen’s nephew. He had initially approached me, as he recognised me from my blog, so the power of beer blogging does work, at least sometimes, and here is a shout-out, in case he is reading this post. It was good to meet you, Evan!

We left at around 6pm, shortly before the rain that had been holding off all afternoon, finally had its way. It was good to meet up with our neighbours, both old and new, and good to see that the community spirit, last witnessed in action during 2020’s "Clapping for NHS workers," is alive and well.

Good to meet both of you as well Paul. Keep up the excellent blogging! Evan

Thank you Evan, it was good to meet you, as well. Cheers, Paul.