"The very poetry of beer" 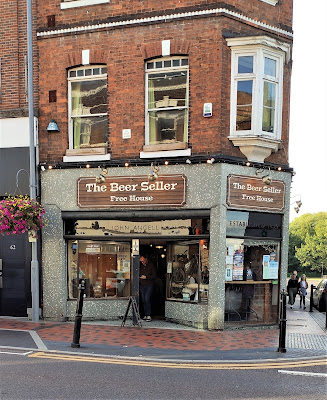 On Saturday afternoon, I called in at a pub that I hadn’t been to in ages. In fact, I’d only called in there once since the easing of the last lock-down, and it was a brief visit at that. I’m pleased that I did though, as I was served with one of the finest pints I’ve had in a long time, and I’d go as far to say the beer was without doubt the best I’ve had since before the start of the pandemic.

The pub in question was the Beer Seller, a converted, former jeweler’s premises situated in Tonbridge High Street. It is owned by the same people that run the Halfway House at Brenchley and has more than a touch of the latter about it. By that, I mean the Beer Seller has the same internal “rustic” feel; something that is enhanced by the false ceiling constructed out of corrugated iron sheeting, and the seating booths sited down one side of the pub. 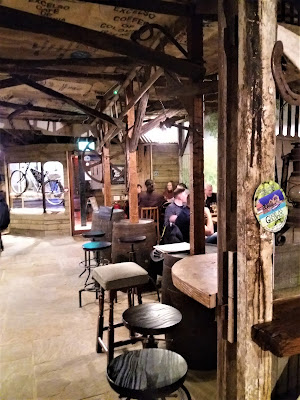 This "Kentish Barn" look surprisingly works, even though it is completely false and out of keeping with what is a 1930’s, art-deco, building. The bar is at the far end of the pub, with the six cask ales, (three regular and three changing), all sourced from SE England, served on gravity, from a temperature-controlled room behind a false wall.

I called in primarily as I had an hour to kill whilst Mrs PBT’s went for her extended appointment at the opticians. It was “extended” as apart from the regular eye examination and sight test, the fact that Eileen also wears contact lenses, meant additional tests/measurements.

This enforced wait gave me time to nip along to the “Organic Village Market” at the other end of the High Street, where I picked up a couple of bottles of Aecht Schlenkerla Märzen – Bamberg’s best known, and finest Rauchbier. The shop has become a regular stockist of this classic beer, and also carries a good selection of other beers, including bottles from Sam Smith’s and a range from Westerham Brewery. The latter are packaged in 440ml cans, which seems a radical departure from their normal bottles. 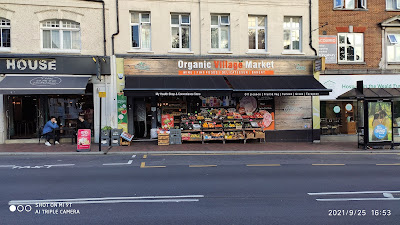 Leaving the latter for another time, I headed back along the High Street, with sufficient time to enjoy a pint at the Beer Seller. It was going to be just a single pint, as I would be driving as soon as Mrs PBT’s finished at the opticians. 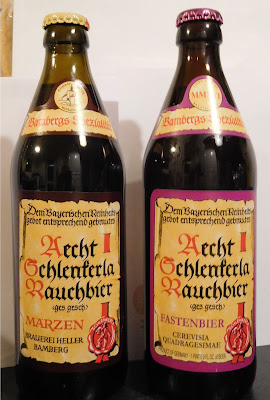 Approaching the bar, my attention was grabbed by the blackboard listing the beers on sale. I did a quick scan, noticing offerings from Cellar Head, Burnt Oak, plus two from Goacher’s.  There may have been others, but with mild and Gold Star from the latter, my mind was made up – "a pint of Gold Star, please."

Poured through a tap, poking through the rear wall, the pale-coloured beer in my glass looked appealing even before I’d raised it to my lips, and when I did so, boy was it good. Perfectly chilled, perfectly conditioned, perfectly presented and a delight to drink. Hoppy, set against a strong malt background it was, as the late Richard Boston famously wrote, “The very poetry of beer.”

As I walked across from the bar I saw an old friend, and former local CAMRA branch chairman, sitting on a stool by the window, enjoying a pint. He beckoned me to join him, so I spent an enjoyable half hour or so, catching up on things.

Ian had just returned from the Spa Valley Railway HQ, at Tunbridge Wells, where he’d spent the day collating and organising the beers already delivered in advance of next weekend’s beer festival. Having already given my reasons for not volunteering or, indeed attending, Ian was fully aware of the thoughts behind my decision, but he was keen to advise me on the progress of things. 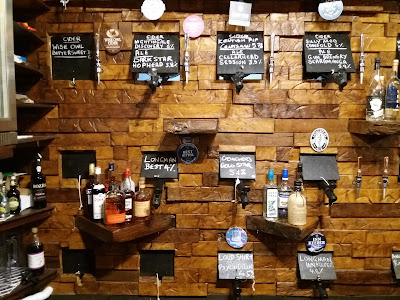 I don’t intend to elaborate as to why I will not be attending the festival, but if anyone asks me privately, I will gladly tell them. There are no hard feelings on either side though, so with that out of the way we both sat there chatting and enjoying the excellent beer.

I am not kidding when I say that beer was definitely the best pint I’ve enjoyed for a long, long time, but with Mrs PBT’s allotted appointment time, drawing to an end, plus the fact I was driving, I was unable to order myself another. 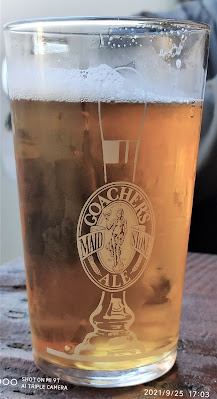 Shortly before I was due to leave Eric, another old friend, walked into the pub. Unfortunately, I could not stay long, as Mrs PBT’s is not a lady to be kept waiting, and I’d already received her text. It was a shame though, as despite having conversed from time to time, by text and by phone, the last time Eric and I had met up for a drink, was back in April. That was when pubs tentatively re-opened, for outdoor table-service only.

These type of conflicting situations do occur from time to time, and can be frustrating and annoying, but with hindsight, a prolonged session on the Gold Star might not have been so wise, given its relatively high strength. On the other hand, to come across a beer in such fine condition, is surely something worth celebrating!

Goacher’s were founded in 1981 and are the oldest survivor amongst the “new wave” of Kentish brewers, having been. Their excellent ales can increasingly be found locally, with Tonbridge’s Beer Seller and the Nelson Arms, being regular stockists.

Blimey. I said the same thing (just not as eloquently as you, Paul) this Monday;

So you did, Martin, and I commented on your post as well. Somewhat uncannily our photos of the Gold Star, are almost identical.

I forgot to mention the prices, £3.80 for that pint - an absolute bargain!

Thanks for Sharing such beautiful information with us. I hope you will share some more info. about Paul's beer and travel. please keep sharing!
Honeymoon Tour packages

Thanks for sharing this attractive Blog. It's very nice information. Keep sharing such blog posts.>>>>>>please visit at once this site for a honeymoon packages