Hopping along at the farm, to Sir Tom 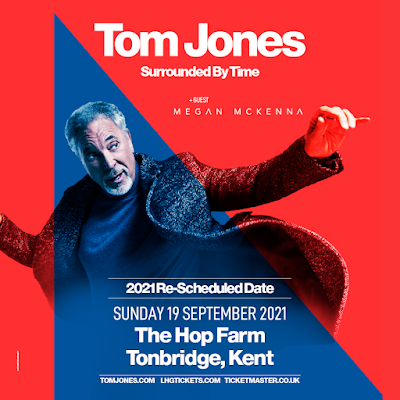 Live music is well and truly back, as Retired Martin and Chris Dyson over at Real Ale, Real Music have been reminding us recently. Not to be outdone, Mrs PBT’s and I grabbed ourselves a slice of the action on Sunday evening, when we headed over to the Hop Farm, at Paddock Wood to see the legend that is Sir Tom Jones, perform live in concert.


Eileen purchased the tickets at the start of last year, for a tour that was supposed to mark Tom’s 80th birthday, but we all know what happened next. Sunday’s concert therefore was the rescheduled tour, with the “boy from the valleys” now celebrating his 81st year.

After a week of dry and often sunny weather, the forecast for Sunday wasn’t looking that good, with rain expected on and off from late afternoon and throughout the evening, but fortunately apart from some light precipitation before we set off, the evening remained dry, although overcast.

The Hop Farm Family Park is a 400-acre country park at Beltring, near East Peckham, which boasts the largest collection of oast houses in the world. Until the late 90’s, the complex was owned by brewers Whitbread, and was known as "The Whitbread Hop Farm."  Originally a working farm, the brewery opened it up to visitors, but as Whitbread looked to move out of the brewing trade, they began looking at selling the complex. In 1997 the hop farm was acquired by new owners, and whilst it has changed hands several times since, its future now seems assured. 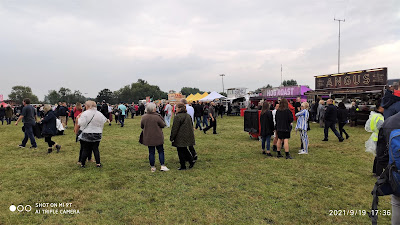 We arrived shortly after 5.30pm, joining one of the expected lines of traffic queuing to get into the complex. I have to say the traffic management and car parking arrangements left much to be desired, but after what seemed like a tour of the whole site, we were directed to a field close to the main arena. From there, it was a relatively short walk to our pre-booked seats.

As with the car parking, the security arrangements weren’t particularly good either, with only a cursory glance at the tickets, that Mrs PBT’s had paid a small fortune for, nearly 18 months ago. So, no scanning of the barcodes, and no checking of the other built-in security features. We were both under the impression that any Tom, Dick, or Harriet would have been allowed in on the strength of a second-rate forgery. 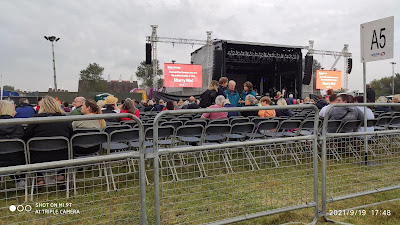 That’s enough moaning for the moment, as we were there to see Tom Jones, enjoy his performance and generally have a good time. We were sat in the front row of Zone B and had a more or less uninterrupted view of the stage. Tom’s set didn’t start until 8.30pm, but prior to his performance several support acts kept the crowd entertained. Foremost amongst these was Megan McKenna, who apparently won The X Factor, and is also a "Reality TV star" – whatever that means?

Mrs PBT’s was pleased to see her, and I too enjoyed Megan’s performance, although her material seemed rather on the weak side. She’s young though and, if I can say this without sounding too patronising, I’m sure that in the fullness of time, she will blossom, discover her true self and learn how to establish a proper accord with her audience.

Sir Tom hit the stage and put on an amazing performance. He demonstrated that he still hasn’t lost it as, if anything, his voice is more powerful than ever, and his stage presence was unquestionable. He opened with a couple of numbers from the start of his career, What’s New Pussycat, It’s Not Unusual and Green, Green Grass of Home, before moving onto some newer material, such as Sex Bomb, She’s a Lady, plus a Leonard Cohen song, whose title escapes me and a Bob Dylan number, One More Cup of Coffee. 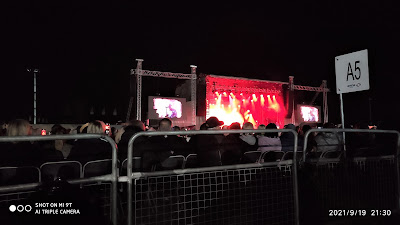 The climax of the performance for both Eileen and I was Sir Tom’s stunning rendition of Delilah. The band really pulled out all the stops as well for this number, and I have to say that they too, were amazing.  Tom had certainly gathered together some world class musicians, to act as his backing groups, and as if to compliment the virtuoso players, the sound quality was crisp and crystal clear.

It’s been a while since either of us have been to one of these big-ticket events, and the ability of the organisers to prise as much money as they can, from the palms of what is, in effect, a captive audience, has, if anything become worse. Concert goers were prohibited from bringing their own food and drink into the arena, and this was enforced by bag searches on the entry points. 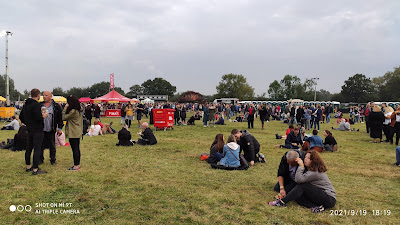 With bags limited in size to just A4, you couldn’t have smuggled much in anyway, so we were more or less forced to buy bottles of water from one of the many drink stalls (tokens too, just to be really annoying), and with burgers costing £7.50, plus another £4.00 for chips, it could have ended up as a dear night. Cans of San Miguel and a cider, whose name escapes me, were the only “long drinks” available, but this didn’t seem to stop quite a few people from becoming rather the worse for wear!

These things unfortunately, seem to be par for the course for large scale events, so me complaining about them isn’t going to change anything, and leaving these issues aside, it was an excellent evening. We were fortunate to have been entertained by a first class, living legend of a performer, which is all the more remarkable, seeing that Sir Tom is 81 years old!

What's more, live music is well and truly back.

Good to see you getting out enjoying young British musical talent, Paul.

His single this year "Talking TV Reality Blues" was astonishing.

It was certainly good Martin, just being out, mingling with other people and enjoying great music (both old and new), in an outdoor setting.

It could have been the Leonard Cohen song, you mention, that Tom sang, but I'm not really sure. All I know is that Sir Tom and his band, put on a stunning performance in a set that has been wooing audiences, both here in the UK and in Europe as well.

Thank you for the topic
Continue -

This My Blog : Travel Vlo Blog