Relaxed, fully-rested and raring to go 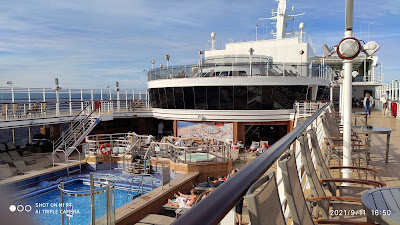 Another quick post, but this time courtesy of my desktop PC, rather than my Smart Phone. We arrived home yesterday, from our cruise, feeling relaxed but also grateful. Our feelings of gratitude relate to us being able to enjoy our first holiday together since November 2019; a date which coincidentally happened to be that of our first ocean-going cruise. 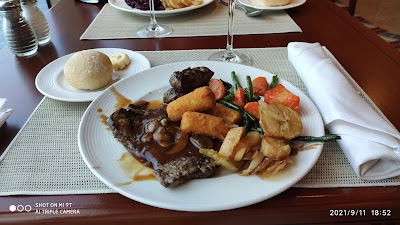 Everything worked out well, from the hotel and its associated car-parking
and transfer arrangements, to and from the port to the room we chose onboard, and the relatively fine weather we experienced. The latter meant calm seas - unusual for the Irish Sea, and allowed us plenty of time, up on deck to spend either relaxing or, when the mood took us, a few circuits around the ship.

The food was excellent, being tasty, well-cooked, and well presented, and with serving staff placing it on one’s plate, rather than the usual free-for-all buffet experience, there was little in the way of waste and even less in the way of gluttony. 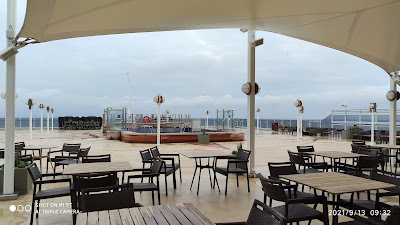 We met several interesting people, many of whom were, like us, just glad of the chance of getting away from it all, and pushing the events of the past 17 months, well and truly into the background. To be able to sit there, watching the waves gliding by, whilst observing, from a distance, passing landmarks such as the Scilly Isles, Land’s End, and the coast of North Wales, was pure, unadulterated relaxation of the kind which fills you with a deep-seated feeling of contentment. Just sitting there, up on deck feeling my cares and concerns slipping away with the tide, left me feeling like a new person. Mrs PBT's felt the same. 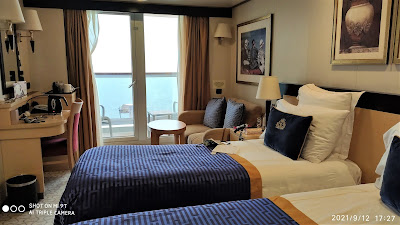 This was just what was needed after a stressful time at work; a situation made worse by the pandemic and the aggravation my colleagues and I experienced in dealing with in the build up to a change of management at the very top. This was followed by a period of change ahead of my planned for change of working to a part-time role. 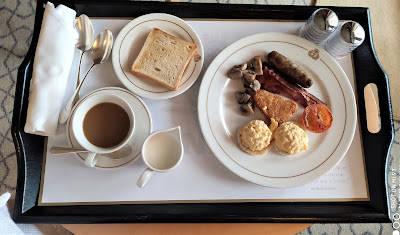 Whilst I wasn't that involved in the actual recruitment process, I drafted
the job description for my successor, and when the new recruit finally started, I was kept busy conducting her initial training. I also spent time helping her become familiar with the company's procedures and working practices. I officially stepped down at the beginning of September, although there was still something of a transition before finally handing over the reins. 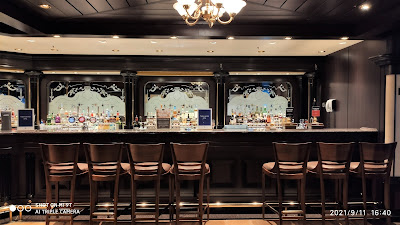 Yesterday I began my new role of Company Health & Safety Advisor. With no staff to manage, I’m my own boss within reason, able to take holiday when I want to, without having to fit in around other members of the department and, by switching to working three days a week, instead of five, I will gain even more leisure time. So yes, it really is good when you can finally let go of things and move forward, unencumbered. 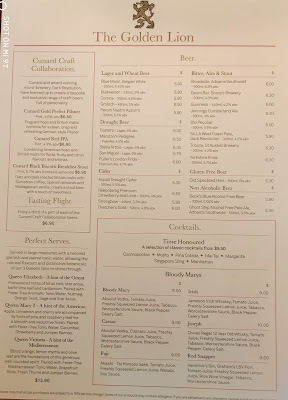 Letting go of unwanted baggage is also be really empowering, especially when the stuff you are letting go of is something that is holding you back or restraining you in some way. A personal example is me no longer being a member of CAMRA. These days, when I enter a pub or bar, I no longer feel obliged to stick solely with the cask offerings.  Instead, I can order whatever takes my fancy, without feelings of guilt that I am, in some way, letting the side down.

If it’s a cask beer that really appeals, I will probably go for it, but if it’s a beer I don't really fancy, then I will opt for a craft, bottled or even keg beer. I found myself doing this on the cruise, although in that instance, there were no cask offerings for me to turn down, or otherwise turn my nose up at!

Returning, for a moment, to the subject of relaxation, Mrs PBT's felt the same way as I did after the cruise, and whilst she won't thank me for mentioning her age, she too now qualifies for her state pension. She is looking to cut down on her work, although she will continue with the book-keeping, and tax-related work
she does for her select group of builders and tradespeople. 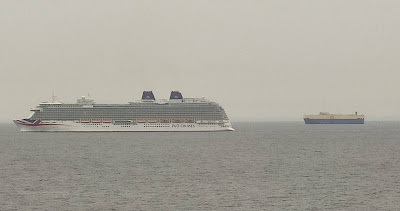 And on that note, I will draw this post to a close and say that we are already looking forward to another cruise, possibly a slightly longer voyage, on one of Cunard's other "Queen ships. We will pick a different  destination as well.

Glad you both had a well-deserved holiday. The food certainly looks good, and those beers aren't paid. Are they converted from dollars to pound at the end of the cruise, do you think?

Thanks Martin, the food was certainly good, although the beers did have to be paid for. The boats are card only, so no cash, but each passenger has a card, that also acts as a room key. The card is linked to one’s credit card, and payment is taken in dollars. The final bill is delivered to the room in the early hours of the final day, so just prior to leaving the ship.

The American influence extends to the sockets in the cabins. We remembered this time to bring several US to UK adaptors with us.

As a CAMRA member I've never felt any compunction about drinking non-real beers if they take my fancy. But it does come across as a bit off at an actual CAMRA event - although an expensive craft keg may be considered more acceptable than a pint of Carling ;-)

When you come to Stockport in three weeks' time, you will be able to sample the wide range of keg beers available in the two Sam Smith's pubs, although neither has the 5% ABV India Ale. (Both do have cask Old Brewery Bitter)

Hi Mudge, whilst I might have exaggerated slightly to make a point, there were quite a few occasions when I did feel I ought to have been choosing cask, in order to "do my bit," so to speak. I agree that it wouldn't be good form to drink keg/craft at an official CAMRA event, but that was when I was still a member.

I'm looking forward to the two Sam Smith's pubs, in Stockport, along with the others, but given the company's quite extensive London estate, I am reasonably familiar with their keg beers.

My "paid" should have read "Not bad" but you got the idea !