Probably NOT the best beer in the world 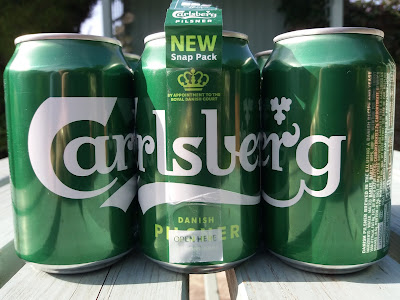 I picked up these “bad-boys” a week ago at the George Inn in Southwark, after attending the Annual General Meeting of the British Guild of Beer Writers. Prior to the AGM, the Guild had held a seminar about "branding," which aimed to show how beer has led the way in bringing a fresh and innovative approach  to drinks packaging.

I wasn’t able to attend the event, but amongst the questions posed by the seminar were: How, why and where do brewers find the inspiration for their packaging? And how can breweries turn a re-brand to their advantage? Does this matter, and how important is sustainability when it comes to packaging? 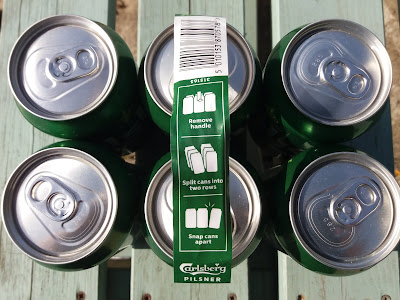 A representative from Carlsberg was at the seminar, but to maintain a balanced presentation, so was the sales & marketing manager from Harvey’s. You may remember the latter successfully re-branding their portfolio a few years ago, but for the purpose of this post, it’s Carlsberg that I want to concentrate on. For a start I have the Danish brewer to thank for the six-pack of cans, you can see in the photo.

Unless you’ve been asleep these past few months you would know that Carlsberg have recently re-launched their standard “cooking lager" here in the UK, replacing it with a re-vamped brew called Carlsberg Danish Pilsner. The decision came on the back of declining sales for all main stream lagers, including Carlsberg, rather than the “change of heart” claimed by the brewery. 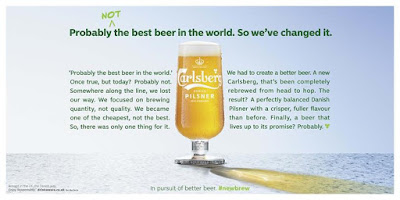 This relates to  the current ads that Carlsberg are running, which pour cold water on its famous strap-line that it brews “probably the best beer in the world.” Now the brewery have admitted that its standard lager was not up to scratch, and even gone as far as suggesting the former head brewer has met a sticky end.

All marketing b*sh*t of course, but what Carlsberg have done is, in their words, “Re-brew the beer from head to hop, to deliver a smoother, fuller mouth-feel and a perfect balance of bitterness and sweetness.” They have also tried to retain the light, refreshing qualities of its predecessor. 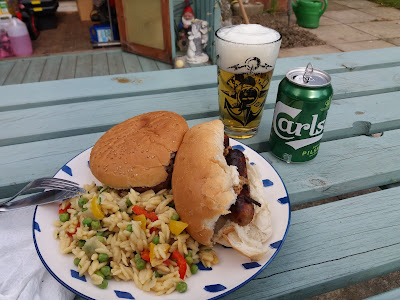 Carlsberg then go on to talk about “Distinctive citrus and floral hop aromas that deliver greater depth of flavour, and a hoppy moreish aftertaste, that will stay with you until the final sip.” Despite such glowing words, it is worth remembering that the beer remains at 3.8% ABV (too weak for a Pilsner, in my opinion), and is brewed at the company's UK plant in Northamptonshire, rather than in Copenhagen.

Carlsberg had obviously turned up at the seminar with the intention of winning over hearts and minds, as they brought with them a massive stack of tinnies. These were available to take home, for Guild members attending either or both events. It therefore seemed rude not to take advantage of their hospitality, and to grab a six-pack for me to try at home. 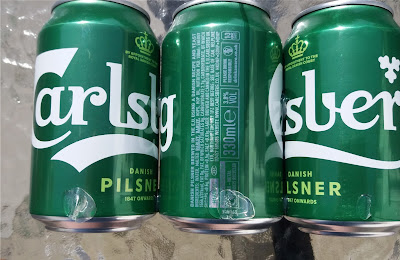 My excuse was the cans were for my son, who is a well-known lager lout drinker, but I was actually quite keen to sample the beer for myself, particularly given all the hype surrounding it. One claim put forward by Carlsberg that I do whole-heartedly agree with is that of  “Minimising the beers’ environmental impact".

This is because the cans utilise Carlsberg's snap-pack glue joins, which do away with the more-or less universal plastic ties, used to hold the cans together. Cans in the multi-pack are held together by small dollops of specially developed glue, which can be snapped apart.. Carlsberg claims this innovative system will reduce plastic use by 1,200 tonnes across their global brands every year. 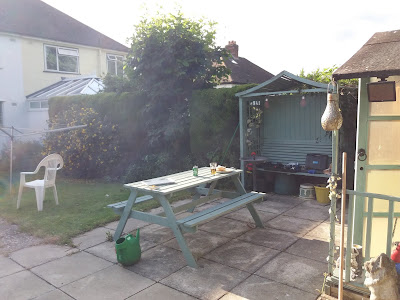 So what is the beer actually like? Well, I have to say it tasted considerably better than I expected although, as stated previously, it is not really strong enough to call itself a true Pilsner. There was certainly some hop aroma present when poured,  and there was some delicate malt notes in the background.

I can’t help thinking though that Carlsberg haven’t gone far enough with the re-vamp, by upping the strength to 4.4% - to match the classic Pilsner Urquell – the original pilsner, and the world’s first golden lager.

Despite these misgivings, I still managed to knock back several cans over the course of the weekend, so Carlsberg must be doing something right. It’s low strength allowed me to whet my whistle, without experiencing too much of an after effect from the alcohol.

For a more in-depth, and also a more balanced view of Carlsberg Danish Pilsner, have a read of this article by  beer historian and published author,  Martyn Cornell, on his  Zythophile website.

But if you upped the strength to 4.4%, you would take it out of the category in which it competes. Upping the strength was what killed cask Boddingtons in the end. In a pub context, people drink ordinary-strength beers for reasons beyond just price.

It's still a cooking lager, but it's a lot better than it was before.

Mudge, I thought it was significantly reducing the hop rate and contracting the brewing out to another company (was it Hydes?), that killed off cask Boddingtons. Brewing a completely different "smooth-flow" version didn't help the brand either.

There is obviously still a market for "cooking lager", but is it governed totally by ABV? At 4.0%, Fosters is slightly stronger than Carlsberg, so perhaps the latter could have got away with a slight increase in strength.

I detested the old Carlsberg but occasionally like a 4% (ish) lager on a hot day so I was interested to try this, I thought it was a vast improvement. Still couldn't drink more than 2-3 pints but I'll definitely try again in a warm day.

Interested to read your views on the standard Carlsberg.

At Latitude Southwold in 2017 the brewer from Copenhagen gave a tasting sessikn with their relaunched Export (washing down herring and followed by Schnapps). I really enjoyed it, though it remains the only Carlsber I've ever drunk!

Thanks for posting a picture of my erstwhile local, the Richard I, Paul.

I lived on Royal Place for a year or so in the late 1970s, about thirty metres opposite. I was peer-pressured into drinking "Spesh" back then, but far and away prefer Ordinary now. I was enjoying a pint of that at the Woolpack on Bermondsey St., when England took their winning stump the other night, incidentally. I actually exclaimed. And at a sporting event.

It's hard to compare tastes over a forty-year time span, but the Bedfordshire contracted-out version doesn't seem jarringly different from the Wandsworth one to me.

It's good to see that "the Tolly" looks much the same as it always did too, or from the outside at any rate.

Sorry Paul, I don't know how the above comment appeared here. Please remove it!