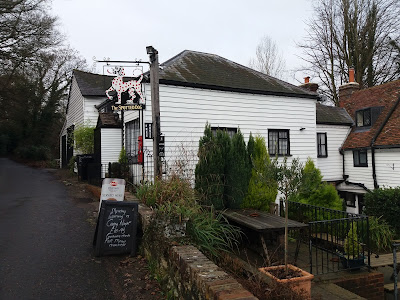 By way of a change from my recent, much “heavier” piece about beer pricing, here’s a short post about the visit my son and I made to the charming Spotted Dog at Smart’s Hill, just outside Pensuhrst. I had volunteered to survey the pub for next year’s CAMRA Good Beer Guide; this was after saying a few years ago that I wanted nothing more to do with that particular publication!

My change of heart was sparked much more by a desire to revisit this lovely old 15th Century inn, rather than doing my bit for the Campaign, but having sat through the preliminary meeting, following our branch AGM, when nominations for possible entries were being taken, I put my name forward in a moment of weakness to help out by surveying a couple of outlying rural pubs. 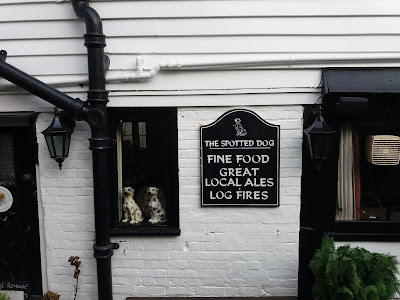 Sunday wasn’t the best day to turn up, survey form in hand, and I actually kept that piece of paper well hidden. As a seasoned pub surveyor, admittedly one who’s a bit out of practice, I know what to look for and what questions to ask without raising the slightest hint of suspicion.

Smart’s Hill is little more than a couple of rows of houses sited on high ground, to the south of Penshurst, overlooking the River Medway which, in this part of Kent, is still relatively small in size. Somewhat unusually, for such a rural part of the county, there is a second pub, called the Bottle House, at Smart’s Hill, although the latter is further up the hill in an even more isolated location. Because of their situation, both pubs rely heavily on the food trade but of the two, I would say the Spotted Dog retains much more of a “pubby” atmosphere. 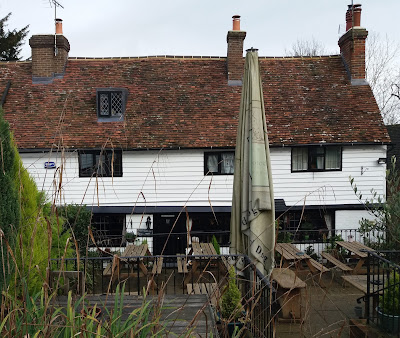 Given this reliance on food, the Spotted Dog was understandably busy when Matt and I arrived, gearing up to cater for all those after a spot of Sunday lunch. Judging by the “Reserved” signs on the majority of the table, booking is advisable; if not essential, and given the dearth of available spaces, we resorted to sitting at the bar. Although the weather has turned milder than it had been recently, both the pub’s fires were lit, and this combined with the beamed, low-ceiling interior, gave a cosy and comfortable feel to the pub.

There were three cask ales on tap, namely Harvey’s Sussex, Larkin’s Traditional and Young’s Bitter; the latter being a guest ale. I gave the Young’s a miss, as ever since this once iconic brewery ceased brewing at its historic Wandsworth home, and threw in its lot with Charles Wells of Bedford, the beer hasn’t been worth drinking. Instead I went with the Larkin’s Traditional, which despite its low strength of just 3.4%, still packs in plenty of flavour whilst being ideal for drivers. 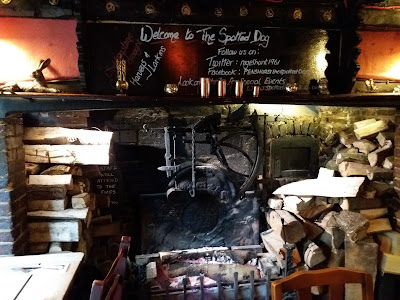 Several parties of pre-booked diners arrived whilst we were sitting there, and it was encouraging to see that several of them were groups of walkers. The Spotted Dog welcomes ramblers, although it does have a sign by the door advising that, “Unless you are God or George Clooney, please remove muddy boots before entering.” As well as welcoming walkers, the pub is also “dog friendly” which, although welcome, is somewhat surprising given its reliance on the food trade.

The Spotted Dog itself, is a 15th century white weather boarded country inn that seems to cling to the hillside, and lies below the level of the road. It is a long low building with a terraced garden area between the pub and the road. Many years ago, there used to be some spectacular views, across the Medway Valley, from the rear of the building, but unfortunately this has now been obscured by the trees on the slope below, which are now reaching maturity. 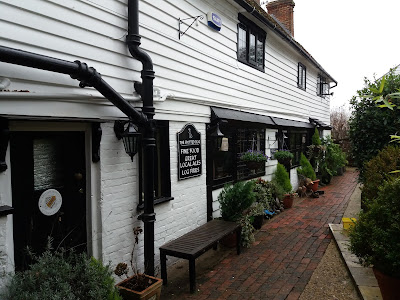 The bar is right in front of the entrance, in what is the narrowest part of the pub, but the building opens out to the right where there is a larger open area, heated by a welcoming log burning stove in winter. There is also a small “snug” area, just in front of the window. At the opposite end of the building is the restaurant area, although as hinted at earlier most of the tables in the main part of the pub are often also set aside for diners, particularly at busy times. For those who like their warmth, there is also a much larger, open fire place, with an impressive stack of logs to match, adjacent to the passage which leads top the restaurant.

The pub’s popularity is evidenced by the large car park, just across the road, but despite the importance of the car-borne trade, many people do make the effort to walk here, as mentioned earlier, and as I too have done on several past occasions. Providing you time your visit right, it is also possible to travel to the Spotted Dog by bus. The 231 bus from Tunbridge Wells runs along the B2188 road, just below the pub, and you by alighting at the stop just before the turning to Smart’s Hill, you can walk up the hill and enjoy a few drinks without having to worry about driving. Do check the timetable though, and allow plenty of time to retrace your footsteps back to the bus stop, unless you fancy a long walk home!

It's certainly an unusual-looking pub.

Good pub in its day but like Plough at Leigh living on its past achievements. Its heyday was when the chef Borichevski was running the kitchen, but that was a long time ago, probably before you were old enough to drink.
The trees that you mention are the second plantation, the previous ones were felled one night by a gentleman who now drinks in the Kentish Horse & The Rock, you probably know him. Unfortunately he now finds it difficult to walk so is no longer capable of wielding a chain saw. The Blacksmiths Arms just up the road was a much better pub but now a private house.
Do you have any news on The Greyhound?
Also the Half Moon at Hildenborough is under new management (still Enterprise Inns) & the Harvies is well kept.

Re Youngs bitter. I was at the Ram brewery yesterday where John Hatch (ex Young's site manager)is still brewing to keep the site as the oldest continual brewery in the country. I asked him what he thought of Youngs bitter and he said that they have eventually after much tweaking started to get it closer to the original - may be worth trying.

Neville, I think the pub has evolved over time to be the way it is. The box-like section, which faces onto the road, has seen various uses over the years. These include function/meeting room, a small and intimate restaurant and a shop selling locally-grown organic produce.

Greengrass, I am probably a bit older than you think, and if a previous government hadn’t abolished the automatic right to free bus passes for the over 60’s, I would now be well into my second year of travelling around the county at the tax-payer’s expense!

I move to Tonbridge in late 1984, and I am assuming this was after the Blacksmith’s closed. I have heard people talk about this pub, but have never been sure of its location. A few decades ago, there were several stories circulating about the trees behind the Spotted Dog. One was they had been planted out of spite, by the person who owned the land. I’m not sure why, but it was the kind of story the press love. I hadn’t realised the trees were second generation; talk about time flying.

Larkin’s will be surrendering their lease on the Greyhound, next weekend. There will be a big leaving/farewell party on Saturday 21st January, to which all are invited. Enterprise have a buyer for the property, but are being very cagey about its fate.

Anonymous, thank-you for the update on Young’s. Your contact at Wandsworth claims that “Eventually after much tweaking, they (Charles Wells) have started to get it closer to the original.”

After 10 years, they’ve had long enough to do this which, I’m afraid, still leaves me slightly sceptical, and the whole sorry affair behind the closure of Young’s brewery, and the move to Bedford, fills me with unease.

I’m not sure I will be going out of my way to try it, as even before the move, I feel much of the character had already been lost from the beer.

Long live Merseyside: we still get bus passes at 60!

I think we’ve had this conversation before, Nev. The way things are going with this country at the moment, I can see Theresa Mayhem (or her successor), dropping bus passes altogether – along with all subsidies for rural bus routes.

We're heading that way now in Lancashire, the county next door, where rural bus routes are being slashed; rural communities will increasingly have to rely on cars - tough if you haven't got one. So much for reducing emissions. My pass is valid only in Merseyside and on the train to Chester, but since I got it, my car use has nearly halved.