A day at the seaside

(Spoiler Alert – this post is not about beer and doesn’t even mention the stuff).

After 10 days off work, and the same number of days over-indulging; especially on the food front, it was time to get out of the house and get some fresh air plus a change of scenery. I had, in fact, been out on a ramble, prior to New Year, and had also made a number of forays down to the town, but New Year’s Day was dull and dreary, and as I was to discover later, there were not many shops open either.

My wife and I had discussed the possibility of a drive down to the coast, and we agreed we would do this on the Bank Holiday Monday, providing the weather was good. Fortunately the sun was shining when we woke up that morning; a complete contrast to the previous day, so after a light breakfast we set off to drive down to the coast, for a day at the seaside.

We live in West Kent, close to the border with Sussex, and whilst we are approximately an hour’s drive away from the sea, we have a choice of destinations depending on which route we decide to take. For example, if we head due south, we will be in Hastings, whereas heading south-east would take us towards Romney Marsh and the beaches of Dymchurch or Greatstone.

We decided on the latter, with the other-worldly shingle spit of Dungeness as our final destination, so headed up towards West Malling first to pick up the M20 motorway towards Folkestone. Apart from the stretch to the north of Maidstone, the motorway was fairly quiet, and we made good progress.

We turned off just east of Ashford and made our way onto the A2070; a fairly new road which leads down onto Romney Marsh.  I know this area well, having lived and grown up just outside Ashford, when trips to the seaside, across the Marsh, were a fairly regular family occurrence. Eileen and I have also been fairly frequent visitors to the area; although these visits were normally made from the other direction. In fact when our son was small, we rented a couple of different properties in the Rye-Winchlesea area, and enjoyed some really good family holidays.

On this occasion, we drove into New Romney; a pleasant enough coastal town which once had its own harbour; as befitting of a member of the Cinque Ports. Nowadays, the town is a mile or so from the sea, and it was the road down to the seafront that we followed, emerging at Littlestone of Sea. This small settlement was a favourite place to visit, during my childhood, as it has an extensive sandy beach which leads right along the coast; to Dymchurch and St Mary’s Bay in one direction and to Greatstone and Dungeness in the other.

We followed the road to the right, along to Greatstone, which was another favourite spot from my childhood. The main thing which has changed since those days is the loss of the once extensive sand dunes. Back in the 1960’s these extended on both sides of the road, and on the seaward side formed a high barrier over-looking the sea. Apart from a short stretch adjacent to the public car park, these have all but disappeared, whilst on the other side of the road they have vanished completely, to be replaced by housing. The large sandy ridges and dips in between, where my sister and I played as children are, alas no more, along with the welcome shelter these dunes provided when a strong onshore wind made conditions on the beach cold and uncomfortable.

We carried on towards Dungeness, passing on the way the Pilot; a seaward facing pub famed for its fish and chips, and the place we planned to stop for lunch at on the way back. Dungeness is one of the largest expanses of shingle in Europe, and is also an important sanctuary for wildlife. There are two nuclear power stations at Dungeness, designated by the letters A and B. Dungeness A opened in 1965 whilst B became operational in 1983. The older power station closed in 2006, while the newer one has had its licence extended to 2028.

Dungeness is also home to two lighthouses; the oldest of which was first lit in 1904. It is no longer in use as a lighthouse but is open as a visitor attraction. With the sea gradually receding, the need to construct a new lighthouse became more apparent; especially following the construction of the power station, when the light of the 1904 lighthouse became even more obscured.  The current, fully automatic structure, built as a replacement, became operational in 1961.

In addition to the power station and lighthouse, there are a number of dwellings, most of which are of wooden construction. Many are owned and occupied by fishermen, whose boats lie on the beach. Fresh seafood can be purchased from some of these dwelling. Several of the houses have been constructed around old railway coaches, which gives them a characteristic appearance.

Perhaps the most famous of these houses is the black-painted Prospect Cottage, formerly owned by the late artist and film director Derek Jarman. The garden which is made of pebbles, driftwood, scrap metal and a few hardy plants is the main attraction here; reflecting the bleak, windswept landscape of the peninsula.

We parked up adjacent to the entrance to Dungeness A Nuclear Power Station, just a short hop from the Britannia; Dungeness’s other pub, a concrete structure which has been gradually extended over the years. It was a short walk from the car park, up a steep shingle bank, to the sea. We stopped and passed the time of day with two heavily armed policemen, who were probably glad to relieve the boredom of their patrol around the power station perimeter. 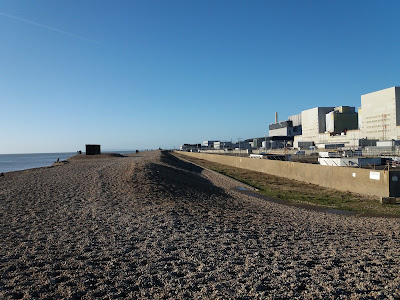 There were a few hardy souls fishing off the beach; due to its steeply shelving shingle, Dungeness is popular with beach fishermen, and I remember fishing there myself, back in my youth. What made the visit interesting for me, was that standing on top of the steep shingle bank, constructed to afford some additional protection to the nuclear plant in the event of a storm surge, it was possible to see both side of the promontory which is Dungeness. I had previously only seen this from the air.

Eileen was however, keen to get back to the car and out of the wind, so once back in the warmth I started the engine and we headed back long the coastal road to the Pilot. We noticed there were even more vehicles in the car park than there had been earlier, and despite managing to find a parking spot it was pretty obvious that the pub was heaving inside, and there we would face a long wait for our fish and chips.

Undeterred we jumped back in the car and drove the short distance along to Greatstone, where we knew there was a decent fish and chip shop, in the form of Greatstone Fish Bar. Our cod and chips were cooked freshly to order, and were excellent value at just over a fiver each. A plastic cup full of scalding hot tea each, followed by parking up opposite, in the shadow of the dunes, allowed us to dine like royalty, eating our ample and tasty lunch, straight out of the paper.

Once we’d finished our meal, I scrambled to the top of the dunes to take a look at the beach. The tide was in, and the sea looked rough, but there were still a few dog walkers taking strolling along just below the seaward signs of the dunes. Eileen, rather wisely, remained in the car.

We drove back to Tonbridge via Camber and Rye. We were tempted to stop off at the latter, but we will save the delights of that lovely old town for another day; especially as we will be able to travel there by train (assuming the crazy strike affecting Southern Trains is over soon).

Journeying back inland through such delightful places as Northiam, Newenden and Hawkhurst, reminded us of how lucky we are to live in this idyllic corner of the South East. It was still light when we arrived home, but the light was beginning to fade, so once indoors, it was a question of lighting the fire, and pouring ourselves a nice stiff drink, after what had been an excellent day out.
Posted by Paul Bailey at 22:00