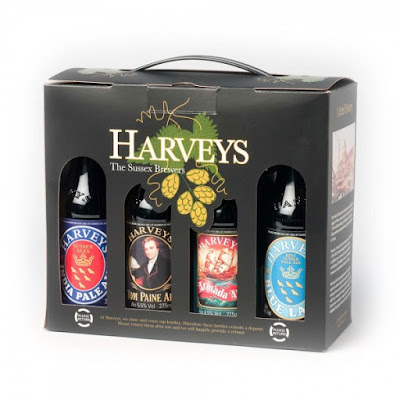 I was given a case of bottled beers from Harvey’s, as a Christmas present by a couple of work colleagues. There are four different Harvey beers in the selection, and three of each. Tom Paine – a strong Pale Ale and 1859 Porter, make up half the case, with Blue Label Pale and Old Ale constituting the other half.

The latter two beers have always puzzled me, as the Blue Label is supposedly based on Sussex Best, whilst the latter is surely the bottled version of Harvey’s highly regarded winter seasonal. But all is not what it seems. Blue Label comes in with an abv of 3.6%; the same as the Old Ale, and yet the draught equivalents of both beers are 4.0% and 4.3% respectively.

This goes against the grain as the bottled beers of most breweries are normally stronger than their draught/cask equivalents; where such things exist. However, these strange anomalies are not the subject of this post; instead I want to draw people’s attention to a practice of Harvey’s which, whilst commonplace in the British brewing industry, is now probably unique. 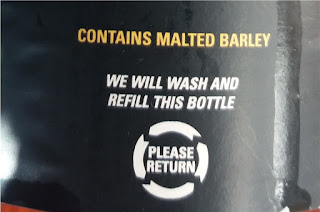 Whilst rinsing one of the bottles, after use, I noticed an instruction on the back label which said “We will wash and refill this bottle. Please Return.” Now whilst I remember this instruction applying to Harvey’s 275ml (half pint) bottles, I hadn’t realised until I saw this notice that the brewery were also geared up for the re-use of their increasingly popular 500 ml bottles, an I have to say, good on them!

Back in the day when virtually all UK breweries had their own tied estates, it was standard practice for empty bottles to be collected up and returned to the brewery to be cleaned, rinsed and re-filled. Sales of bottled beers declined sharply during the late 80’s and early 90’s; helped in part by the increase popularity in cask(“real”) ale, and also by the switch, particularly in the off-trade, to cans.

This, coupled with the effect of the government’s “Beer Orders” which forced the larger breweries to sell off much of their tied estates, was probably when many breweries gave up on bottled beer. Many smaller breweries ripped out their bottling lines; many of which were both antiquated and labour-intensive, and whilst a handful of the remaining large breweries stepped in to fill the vacuum, their heart wasn’t exactly in it either.

Ironically it was the supermarkets that were responsible for the revival and indeed the renaissance of bottled beer in the UK, with the introduction of the so-called "Premium Bottled Ale" (PBA). These beers were, at least to start with, more or less exclusively bottles versions of well know “real ales”, with brands such as Fuller’s London Pride, Greene King Abbot, Courage Directors and Wells Bombardier well to the fore. Attractively packaged in 500 ml bottles which, by nature of the way in which supermarkets operate, were non-returnable and single-trip, sales of PBA’s really took off, and soon lesser known, but often more distinct brands joined the fray. Certain breweries (Charles Wells and Hall & Woodhouse spring to mind, but I’m sure there must have been others), invested heavily in state-of-the-art bottling lines, allowing smaller breweries, who could not afford such investment, to join the party.

All of a sudden bottled beers were back in fashion; although the market had switched from the on to the off-trade. A handful of the smaller breweries had stuck with their old-fashioned half-pint bottling lines, and Harvey’s were prominent amongst them I suspect that whilst they have since upgraded their filing line, Harvey’s took the conscious decision to stick with returnable and refillable bottles.

Whilst, with the exception of Harvey’s and possibly one or two others, the practice of returning bottles for refilling has died out in the UK, I have noticed from my travels that it is still commonplace on the continent; especially in Germany. In that country, it is much cheaper to drink at home; far more so than it is in the UK.

Many people will pick up a crate of bottles from their local brewery (there are enough of them, particularly in Bavaria), and then return the crate of empties when they go to collect a fresh crate. Supermarkets too are geared up for the sale of beer by the crate, and will offer customers a refund on both the empty bottles and crate, when they are returned. This situation is light years removed from what we have in the UK, but then the Germans have always been big on recycling and other eco-friendly practices. 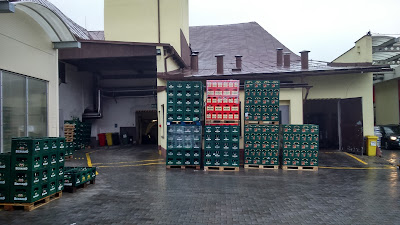 Given the way in which the UK beer market has evolved over the years, I do not envisage a return to returnable and refillable bottles, but before finishing I want to pose the question, “Just how environmentally friendly is the practice?”

At first sight, re-using bottles could be said to win hands down, especially when compared to sorting, collecting, crushing and re-melting single-trip ones. There are also the associated costs of manufacturing and distributing new bottles, so cost-wise non-returnable bottles probably aren’t particularly attractive.

With returnable bottles there are cleaning costs, including the removal of labels, and this is where the environmental impact starts to show its face. Harsh caustic solutions are often used in the cleaning and label removal processes, alongside the use of detergents and copious quantities of hot water. The cleaned bottles then have to be dried, so more energy costs are involved here.

The question which arises from this, is the re-use of returned bottles as “green” as it appears? Also the same arguments could be put forward in relation to the cleaning and refilling of casks and traditional kegs, as opposed to the use of “one-trip” containers for bulk beer, such as “Key-kegs”. I would therefore be interested to hear what others have to say on this subject.