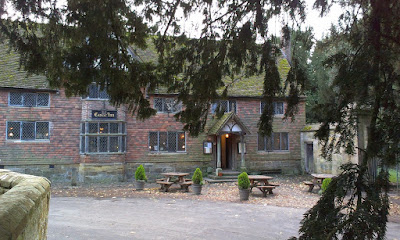 At the tail end of October, last year, I announced that the historic Castle Inn in the picturesque village of Chiddingstone, was set to reopen the following month, after a lengthy period of closure.

Unfortunately, it seems my announcement was rather premature, as three months down the line, this National Trust-owned pub remains firmly shut; as I witnessed the other Sunday when I drove passed for a look.

Yesterday lunchtime I was in the Greyhound at Charcott, chatting to the landlord, a fellow customer plus Mick, who has been Larkin’s drayman for more years than I care to remember. I asked about the Castle, and was told that the pub is now unlikely to open until March at the earliest. This means the pub will have been closed for almost a year, and both the National Trust and surrounding businesses, will have suffered a significant loss in income.

Last October I mentioned Nick Naismith as the man who will be taking over the tenancy. Mr Naismith is a director of Westerham Brewery, and has a good track record with regard to turning round ailing pubs. A few years ago he rescued the Wheatsheaf  in nearby Bough Beech, so if anyone can save this lovely old inn, he can.

However, despite his obvious credentials, it seems that negotiations with the National Trust are taking far longer than originally envisaged. Now I obviously don’t know the ins and outs of this, but the sticking point appears to concern some much needed repairs to this lovely old 15th Century inn.

I posed the question in my original post from April last year, that perhaps the repairs are quite extensive (structural even?), and the that National Trust were left with little choice but to close it until the work is complete. Now unless the works were pretty major, I’d have thought nine months ample time to have completed them, so the news that there’s been little sign of any work taking place at the pub does not give grounds for optimism.

There are also other issues associated with the Castle, including the lack of car-parking facilities, and these combined with the National Trust’s track record of aiming for as high a rent as possible, are almost certainly not helping.

So yet again it’s a question of “Watch this space”, but with spring not that far off and the lucrative summer tourist season following close behind, the National Trust will be extremely foolish, as well as financially irresponsible with its members’ money,  if it allows the Castle to remain closed for a further extended period.

I'm a National Trust member, but I'm not convinced their financial management is as good as it should be.