Apricity and last orders at the Greyhound 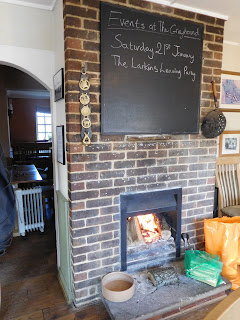 In a previous post I mentioned the sad closure of the Greyhound at Charcott. At the moment we don’t know whether this is a temporary situation, or a permanent one. I will be examining the options regarding the pub’s future in a later post, but for now I want to focus on the Greyhound’s last day and the part played in it by my local CAMRA branch.

The Greyhound’s farewell party took place last Saturday evening. As there would be a lot of clearing up to do, not just after the party but because Larkin’s were due to surrender their short-term lease on the pub, James the landlord agreed to host one final session at lunchtime, the following day. This was primarily to allow local CAMRA to say farewell to the pub, but also to give those local drinkers who were unable to attend the night before, the chance for a few final drinks.

James told us the pub would be open from midday to around 4pm, which fitted in nicely with people’s travel plans. An hourly train service on the Tonbridge – Redhill line would allow members to alight at Penshurst, and then take a 15-20 minute walk to Charcott, by means of a tarmac path which crosses the old (WWII) Penshurst Airfield. The more active amongst us decided to walk from Leigh, a village which is one stop back along the line in the direction of Tonbridge.

So on a freezing cold day, made bearable by some very welcome and pleasing hazy sunshine, three of us caught the 11.36 train over from Tonbridge in readiness for our walk. We met up with the fourth member of the walking party, who happens to live in Leigh, and then headed up towards the parish church, and then through the church-yard.
I pass through Leigh twice a day, on my drive to and from work, but in over 10 years of doing so, this was the first time I’d visited the church-yard. The church stands on higher ground than the rest of the village, and I’m certain there are reasons why the original builders chose this location. Leigh is what is known as an “estate village”, in so much that the village centre was re-modelled by the family of landed gentry who owned much of it. The latter lived at Hall Place, a stately pile which we would be circumventing on our route to Charcott. Hall Place was rebuilt, to its current design in 1872, and many of the handsome looking, Victorian properties in the village date from the same period.

The sun was shining, and there was not a cloud in the sky as we passed out from the church-yard, and took the footpath in front of one of the ornate gatehouses which forms the boundary to the Hall Place estate. We passed several groups of walkers heading in the opposite direction; mainly people out with their dogs.

Hale Place itself was largely invisible; hidden behind a row of trees, but also partly obscured by the hazy sunshine, and the footpath we were following also took us around the edge of a wood, but eventually we passed out into open countryside, pausing en route for a look at Leigh Park Farm, with its associated oast houses and waterside setting.

The final section of the walk was along a road, but fortunately one which doesn’t receive that much traffic. Before reaching the pub, we decide to make a brief detour for a look at the mysterious “shoe tree”; a tree with a number of pairs of shoes and boots hanging from its branches. No-one seems to know the purpose or significance (benign or sinister) of this; not even the locals.

We also bumped into a person carrying out some restoration work on a former nuclear bunker, close to the junction. It turned out he was a volunteer, belonging to a preservation group which had bought the bunker, when they were all sold off by the M.O.D. at the end of the Cold War. I took a few photos, including one looking down the quite deep entrance shaft. I’m not sure that I fancied climbing down there, but fortunately we weren’t offered the opportunity; besides the pub was now close by and we were wasting valuable drinking time.

When we arrived at the Greyhound, we found the rest of the CAMRA party standing outside waiting for us. Apparently there had been a problem with the smoke alarm which kept going off, so it was lucky that it was warm enough to sit outside (still with coats on, of course). This was “Apricity”!  The pub had been drunk dry the night before, so James had been along to Larkin’s to pick up a polypin of Traditional Ale. Many of us had brought a packed lunch, so we sat outside eating our lunch, whilst enjoying both the beer and the sunshine in equal quantities.

There were about a dozen of us from CAMRA, and probably half that number who were either locals or casual visitors. The restoration enthusiast from the bunker also came along.  By this time James had sorted out the smoke alarm, so as the sun slowly began to sink in the sky, we moved indoors. The fire had also been lit, and this gave a nice welcoming touch.

It wasn’t too long before the polypin ran out, so James drove the short distance to the brewery to pick up another. The beer in the second one was icy cold, which rather slowed down the rate of drinking, but I still managed to sink four pints.  As Larkin’s Trad has an ABV of just 3.4%, the four pints had very little effect on me. As a few other people remarked, it would have been nice to have found either Larkin’s Best or their Porter on sale, but under the circumstances we were probably fortunate with what we had.

We left around 3.40pm and walked back across the old airfield in order to catch the train back from Penshurst station. Before leaving we said goodbye to James, and wished him well for the future. The new polypin looked as though it was close to running out as we departed, but whilst it had been a good day, we left with a distinct feeling of sadness. Would we ever enjoy a glass of beer in the Greyhound again? Or was this the last farewell?  Who knows, but in the words of Fairport Convention “Time will show the wiser.”

Apricity : the warmth of the sun in winter.
Posted by Paul Bailey at 22:07