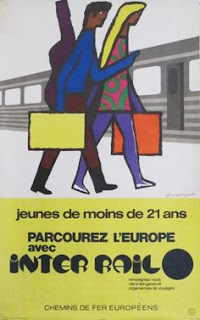 As this blog is as much about travel as it is about beer, here’s a post which outlines one of my earliest experiences of travelling beyond these shores; back in the days long before the advent of the internet and on-line booking, and harking back to a time when items such as basic mobile phones, let alone “Smart-phones”, were nothing more than figments in the minds of science fiction writers.

Back in the mid-1970’s; I think it was the summer of 1975, although it could have been a year later, a student friend and I embarked on a month’s travelling around Western Europe, by rail, taking advantage of the Interrail pass. This was, and still is – although it has been modified and expanded over the years, a ticket which allowed the holder unlimited travel across the rail networks of all those countries which had signed up to the scheme.

Basically, this meant all of western Europe, plus former Yugoslavia. Eastern-bloc countries (those behind the “Iron Curtain”), were not participants in the scheme, but the prospect of being able to travel from Scandinavia in the north, right down to the Iberian Peninsula in the south, and from France in the west, across to Greece and Yugoslavia in the east, still afforded ample scope for some quite extensive journeys, with plenty of countries to visit along the way.

I travelled with my friend Nick, who I had known since my first day at Salford University. We’d met, whilst standing in the queue waiting to register. We lived close to one another and would regularly meet up for a drink, which fitted in well with our love of beer, and also membership of CAMRA. Nick had tested out the Interrail experience the previous year, although after becoming separated from his travelling companion quite early on in the trip (due to the latter individual losing his passport), had ended up completing most of the itinerary on his own. This time around he was looking for someone more reliable and more responsible; which was where I fitted in. 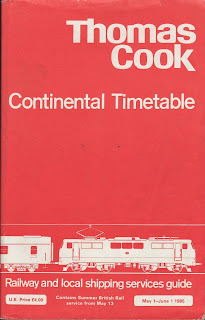 We settled on the long summer break for our trip, and duly set out to map out our itinerary. Armed with little more than a map of Europe taken from a school geography book, we decided on a circular route, travelling clockwise around the western half of the continent taking in the Netherlands, Denmark, Germany, Austria, Yugoslavia, Italy, France, Spain and then finally back  to England, via France.

With a rough idea of our direction of travel, along with the countries we would be passing through, we moved on to the next stage which was to look at rail routes and train times, and or this we enlisted the help of the Thomas Cook International Train Timetable; a weighty tome which gave details, and train times, of virtually all the main European rail-routes, along with many of the minor ones as well.

This was a job requiring both concentration and attention to detail, so in true student tradition we spent several evenings in the pub, pouring over the timetable, whilst taking notes and jotting down details. (You didn’t think we’d do this in the library did you?) Our chosen location was the public bar of the Honest Miller at Brook where, over copious pints of locally-brewed bitter, served in dimple mug glasses, we poured over map and timetable, fine-tuning our itinerary.

Brook was the village where I spent my teenage years, and where my parents and sister still lived at the time. It is a small village, nestling in the shadow of the North Downs, a few miles outside Ashford in Kent. The Honest Miller was (still is), Brook’s only pub, and at the time was a real unspoilt village local, with two bars; one of which was a traditional public bar with a quarry-tiled floor, an open fire (in winter), and a serving hatch in place of a bar. Even better than this was the gravity-served Whitbread Trophy Bitter, brewed locally in Faversham and based on the old recipe for Fremlin’s 3 Star Bitter.

During the Easter vacation, Nick had come to stay for a few days (he only lived in London). I think my parents, or my mother at least, were relieved to meet the person their only son would be disappearing off round Europe with, for a month – and literally disappearing as with no modern communication devices, apart from the occasional public call box and the odd postcard home, I would be totally incommunicado.

During these evenings in the put, we sketched fleshed out the bones of our rough itinerary; deciding on train times, locations we wanted to visit and places to stay. We agreed that in Northern Europe, these would be Youth Hostels, whilst in the warmer south, we would camp. Consequently we would need to carry a small, two-man tent; a burden we agreed to take turns at carrying. We would also, wherever possible, travel using over-night train services, as that way we could sleep on the train (or at least try to), thereby saving on accommodation costs.

We also listed out what we would need to take in terms of clothing, sleeping bags and camping gear, and what we could get away with by leaving behind. I invested in a decent framed-rucksack, and we both joined the Youth Hostel Association. In addition, whilst staying with Nick’s father, in London, we did the rounds of the various national tourist information offices to pick up maps, brochures, local guides etc; in short anything we thought would be useful for the places we were intending to visit. We also each purchased the all important Interrail pass. I can’t remember exactly where we picked these up, but I’ve a feeling it may have been one of the main London termini; possibly Victoria. 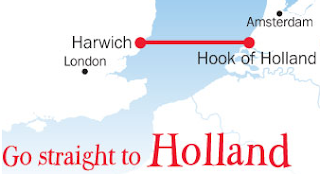 Eventually the day of departure dawned, and we set off from Liverpool Street station and caught the train to Harwich. From there we took the ferry across the North Sea to the Hook of Holland; a rather tedious six-hour crossing. Fortunately the sea was calm, and after passing through customs at the Hook, and being asked a few pertinent questions by the Dutch immigration officials (hardly surprising in view of our appearance – long hair and the rucksacks we were carrying), we were boarded a train heading to Amsterdam.

Now I don’t intend giving a blow by blow account of our trip, so I will confine the narrative to beer-related matters, plus the occasional point of interest, and you will be able to read about this in the next installment.
Posted by Paul Bailey at 22:18

I look forward to this series of posts. Traveling and discovering prior to my internet age, should be a great read.

Settled down to read this whilst sipping a pint of Harvey's Old Ale, which I'm sure you would approve of and think every reader should ☺

Must say enjoy your blog and style of writing and have used your blog to discover other good blogs via your reading/following list.

Pleased to hear you enjoyed the post, Liam. Things were certainly a bit different 40 years ago, and with only guidebooks to guide you, there was much more of a sense of adventure when visiting new places for the first time.

I am writing up the next part of the trip, which gets down to the nitty-gritty of searching out and enjoying a few beers abroad; something which wasn’t easy on a tight student budget.

I am a big fan of Harvey’s Old, especially at times like this when the temperatures are so low. It’s certainly one of the finest Old Ales around, but it’s a pity there aren’t more pubs stocking it.