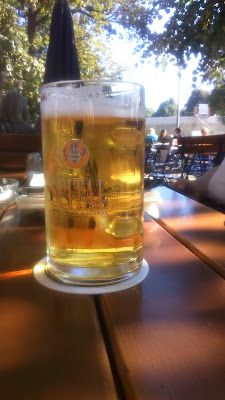 With its setting just off the end of the centuries old Steinernen Brücke (Stone Bridge), on an island in the River Danube, Spitalgarten ranks as one of my favourite German beer gardens. I can think of few better ways of spending a summer’s evening than sitting at one of  Spitalgarten’s  tables next to the river, and enjoying the view of old town Regensburg and its imposing cathedral. With a half litre mug of Spital Helles, fresh from the brewery behind the beer hall and restaurant, a hearty Bavarian dish of roast pork and the company of friends or family, then it’s safe to say, life doesn’t get much better than this.
I first visited Spitalgarten in 2008, when my son and I took a week’s holiday in Regensburg. Matthew was only 16 at the time, but under Germany’s liberal licensing laws was legally allowed to drink beer. We made several visits there, including one memorable evening when Germany were playing Turkey in the semi-finals of the Euro's Football Championship. A large screen TV had been erected at one end of the garden, and the place was absolutely rammed. We enjoyed chatting with the German fans and joined in their delight as their team went through to the finals. (They  subsequently lost to Spain, but that’s a different story!).

I was determined to re-visit Spitalgarten on our recent holiday, so on a baking hot late September day, my wife, son and I walked over the ancient stone bridge across the Danube, and found ourselves a nice shady table with views back across the city. This was Eileen’s first experience of a German beer garden and she got into the spirit by ordering half litre mug of Spital’s alcohol-free beer. Matt and I had a couple of mugs each of the brewery’s tasty Helles, and we all enjoyed some equally tasty and filling local dishes. 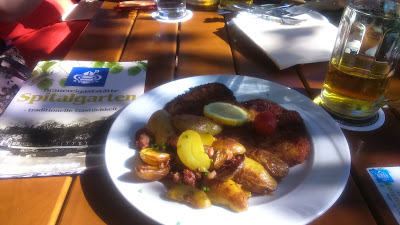 The garden was quite empty when we first arrived, but soon began to fill up; mainly with pensioners, it
has to be said. This was in contrast to what I remembered from our previous evening visits, when the clientele had been mainly students and other young people. With reasonably priced food, good beer and a pleasant outlook, it is easy to understand Spitalgarten’s attraction for both age groups.

None of us had room for any more beer after our meal, so we paid the bill and wandered off. Eileen was impressed by the way the waitress remembered exactly what we’d had to eat and drink, and also by the way she totalled it up on a slip of paper.


On the way back I made a detour to the brewery, to pick up some bottles, whilst wife and son went and got an ice-cream each. For the oldest brewery by far, in Regensburg, with a history dating back to 1226, Spitalbrauerei are very much a go-ahead modern company. They have started brewing English-style beers, such as Pale Ale, IPA and Stout.

As far as I am aware, these are only available in bottle form, and it was to purchase some of them that I headed to the brewery shop. There will be more about the shop and the beers in a later post.