An Evening in Kentish Town 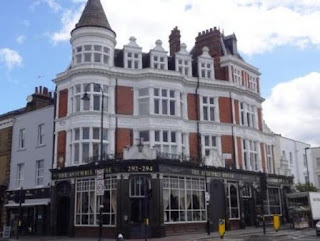 A Trade Show brought me to London’s Docklands on Friday afternoon, and whilst the exhibition wasn’t particularly up to much, my visit did at least afford the opportunity to meet up with an old friend and work colleague in the evening.

My wife and I worked with Andrew, back in the early 1980’s when we were all employed by one of Tonbridge’s largest companies. We went our separate ways, work- wise, when the major part of the firm's business was sold off in 1985. Andrew gravitated up to London and we lost touch; until last year, when we arranged a reunion back in Tonbridge.

It seemed a good idea for me to meet up with him, on his home-patch this time; particularly as he was always a totally committed pub and beer man, so on Friday evening we met at Kentish Town tube station, close to Andrew’s home. Just across from the station is a large, handsome looking pub called the Assembly House, and it was there that we headed to first. 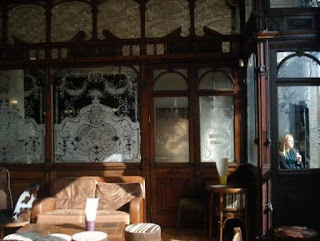 The Assembly House is Grade II listed, and according to WhatPub, it was built in 1896. With its large and prominent French chateau style tower, it is quite a landmark locally.  The interior is large, having been opened out in recent years, and is naturally lit by clear windows. There is a large bar counter which extends from the front room, round the side and into the back room, but the most striking feature is the etched glass to the right hand side of the large single room. There is also a skylight in what was once the billiard room, at the back of the pub.

We found a table close to the door, after first grabbing ourselves a couple of pints. There was a selection of interesting beer on sale, including offerings from Old Dairy, Truman’s and Windsor & Eton. We both opted for the latter in the form of the brewery’s light and refreshing Parklife. Coming in at just 3.2% ABV, this pale light ale manages to pack plenty of flavour for its low strength, and in view of this it was a good beer to start on. What’s more, it was served in a dimpled jug.

Andrew had already told me about the Assembly House’s popularity, and on a Friday evening, the pub was bound to be busy. With this in mind, we decided to leave, but primarily to ensure we got a seat at the next pub. This was a short bus ride away and was the legendary Southampton Arms; a pub I had read a lot about and had always wanted to visit. 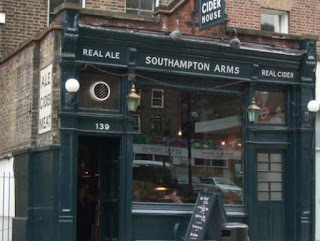 I wasn’t disappointed when we walked through the doors of this small, traditional London boozer with its long thin bar and pew style seating. Anyone who has been there will be aware of the pub’s policy of only stocking beers from small independent breweries, along with a range of 8 traditional ciders. There are also two lagers from the Meantime Brewery of Greenwich.

The ales are dispensed from a line of hand-pumps on the bar, whilst the ciders come from a further set of hand-pulls along the back wall. The latter is covered with some original white tiles, and to complete the Southampton’s authenticity there are two fine old pub mirrors; one advertising beers from Lacon’s of Yarmouth and the other, that former great ale of old England, Draught Bass.The pub also offers a limited range of bar-snack type food, in the form of pork pies, sausage rolls, scotch eggs, roast pork in baps plus various vegetarian options.

We were lucky to find a seat on the end of one of the benches, and having secured this, decided to stay put for the rest of the evening. We drank our way through three of the beers; or rather I did, as my friend stuck with the first one, which was Howling Hops Pale XX 5.0% ABV. I also tried the same brewery’s 3.8 % Pale Ale, and an interesting 5% dark, seasonal beer from Salopian, called POGO.

There was a good crowd in the pub, with the small garden area at the rear providing a welcome overspill. We couldn’t help noticing that we were by far the oldest two people there; not that it mattered and I have to say the service from the knowledgeable bar staff was friendly and exemplary, allowing us to try the beers before deciding which to have. 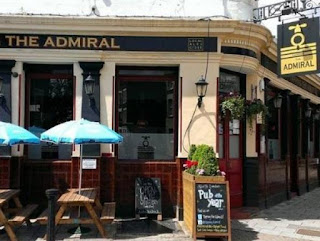 We were, of course, had lots of catching up to do, and the time was slipping away, so shortly before 10pm I resisted the temptation of a final pint, and we departed. We crossed the road and caught the bus back to Kentish Town station, where Andrew and I parted company. I took the tube to Charing Cross and then the train home to Tonbridge. Despite falling asleep a number of times I managed not to miss my stop.

We have arranged a further night’s sampling in Kentish Town, where my friend has promised to take me to his local; a pub with the strange name of Tapping the Admiral. As far as Friday’s session was concerned, the beers in both pubs were good, and I scored them at either 3.5 or 4 NBSS on the WhatPub site. My only slight grouse was that London prices take a bit of getting used to; with £4 a pint at the Assembly House and a slightly more reasonable £3.80 at the Southampton Arms.

Photos: I didn’t have my camera with me and, given the poor light conditions on Friday evening, the few photos I took with my Smartphone were grainy and out of focus. The photos accompanying this post therefore appear courtesy of WhatPub.

Regarding London prices, £4.00 and £3.80 are now, sadly very much at the low end of the price spectrum.
Good pubs though.

Thanks for that Paul.
I'm down in that there London soon for a Christmas knees-up with a few old chums and the Southampton Arms looks a good spot for a few early scoops.

I guess you are right about beer prices in London, Citra. My friend did say that the Southampton Arms represented the lower end of the spectrum. He also said that he’d stopped visiting the bar attached to Camden Brewery, as prices there were nudging towards the £6 level.

I’m sure you will like the Southampton Arms, Stanley. If you take a bit of time for some prior research, then there will be plenty of other interesting water holes to visit as well.

I don’t know London as well as I used to, but it’s always worth a look at Tandleman’s blog for recommendations. TM, of course, lives in the Rochdale-Oldham area, but he has a flat in London and makes frequent visits to “the smoke”. Being a discerning beer and pub man, he knows a good pub when he sees one, but he also is not shy of telling readers which places to avoid!