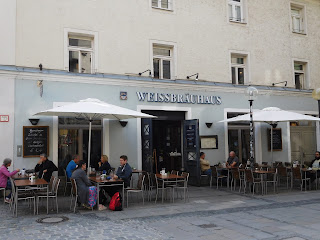 Most German cities, and indeed many German towns, have a brew-pub; some larger cities will obviously have several. Regensburg is no exception, and on our first day in the city, following a full morning of sight-seeing and shopping, we found ourselves at the Regensburger Weissebräuhaus in search of a spot of lunch.

The sun was shining and the temperature warm, so we grabbed one of the tables on the pavement outside and sat down waiting for the waiter to arrive. Matt and I had been to the Regensburger Weissebräuhaus on our previous visit to Regensburg, back in 2008.

On that occasion we had also sat outside, enjoying a couple of late night beers as hordes of crazy cyclists sped by, ringing their bells and shouting in delight at Germany’s win against Turkey that night, in the semi-finals of the Euro 2008 Football Tournament. Their excitement was to be short lived, as a few days later, the home team lost to Spain in the final, but for that night at least, the townsfolk had cause for celebration.

Returning to the present, we had a typical Bavarian lunch of Schnitzel with potato salad for Eileen and Matt, whilst I had Leberkaas (meat loaf) with Spiegelei (fried egg) and roast potatoes. Matt and I had a couple of half litres each of the house-brewed Helles, which was very good. It is worth mentioning here that most German brew-pubs follow a relatively “safe” formula of brewing a Helles, a Dunkles plus a Wheat beer, with perhaps the odd seasonal at certain times of the year.

The Regensburger Weissebräuhaus is no exception, although as might be guessed at from the name, Wheat beer is the speciality of the house, with both light and dark versions offered, but as I am not a fan of German wheat beers, I stuck with the Helles. Using the excuse of needing a pee, I took the opportunity of a look inside. The attractive, polished copper brewing kit dominates the corner of the pub nearest the entrance, and extends up to the next floor, which coincidentally is where the toilets are situated.

The brewer had just finished the days brew, and was clearing up, but the delicious smells left over from mashing and boiling still permeated the building. For some strange reason, the upper floor was busier than the ground – perhaps people didn’t want their leisurely lunch being disturbed by the brewing activities taking place below, but I thought it was good to see the plant being used for its intended purpose.

We didn’t return to the Regensburger Weissebräuhaus, as there were just too many other places to eat and drink in the city, but if you ever find yourself at a loose end in Regensburg, you could do a lot worse than call in there.
Posted by Paul Bailey at 23:01

I enjoyed reading your work. I'll come back for more

Keep up the good work :) from TheStillery, a stuart bar in Florida