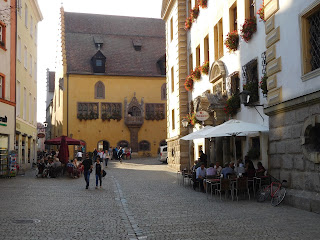 The family and I arrived home in the early hours of Monday morning, following a very pleasant four day break in Regensburg. We were extremely lucky with the weather, with temperatures in the low to mid twenties, and wall to wall sunshine for virtually the whole of our stay, and this really enabled us to see this lovely old city in its best light and to experience a little of the “café culture” for which Regensburg is famed. 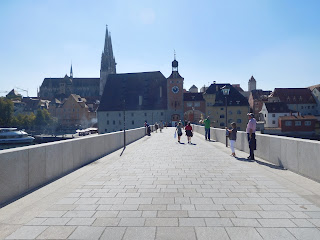 I chose our hotel carefully; picking a location right in the heart of the old city, or Alt Stadt. As virtually the whole of this area is pedestrianised, it was easy getting around on foot, especially as the heart of Regensburg is fairly compact anyway. Before going any further, I want to stress we were there for a family holiday, which of course meant fitting in with everyone’s needs, so despite enjoying quite a few local, and not so local beers, it was not an endless pub-crawl. 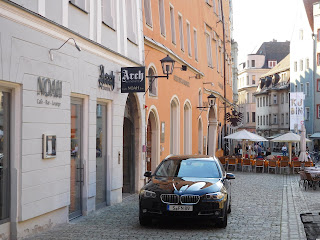 I will be writing about our time in Regensburg, in more detail, over the next few days, but as one might expect for a town which is the fourth largest city in Bavaria, good beer and decent pubs were not hard to come by. In addition there was also a nice sprinkling of more cosmopolitan establishments, with Italian restaurants and ice-cream parlours leading the way. 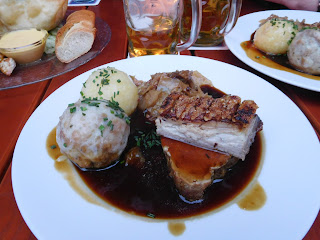 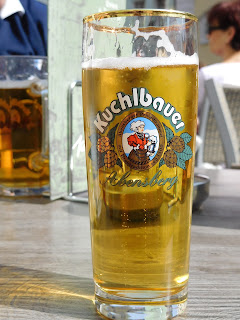 During our stay, the city was thronged with tourists, but the fact that Regensburg is out on a bit of a limb, on the edge of the Bavarian Forest, does mean it is necessary to  make a special journey there in order to experience its charms; but this only adds to its appeal. I believe that during our stay there we only heard two other English accents, and they were from a couple we passed in the street, but in contrast we noticed quite a few American visitors; including several who were staying in our hotel.

Regensburg is situated on a sharp bend of the River Danube, at the most northerly point of what is the second-longest river in Europe. The historic Steinerne Brücke (Old Stone Bridge), across the Danube, is one the oldest in Germany, and from its ramparts, one is rewarded by spectacular views of the old town which, unlike many German cities, suffered very little damage during the Second World War. Regensburg is capital of the Oberfalz region of Bavaria; even though it only became part of the latter state in 1812. Prior to this it was an Imperial Free City, with its own rulers.

We flew into Nuremberg, using Ryanair, who now operate the only direct flights from the UK. The city's airport is a nice compact affair, and from here a short journey by Underground, takes travellers into the heart of the Nuremberg. From the Hauptbahnhof, there is an hourly train service to Regensburg, with the fast Regio - Regional Express service alternating with the sleek, non-stop ICE - Inter City Express trains. Journey times vary from an hour to an hour and twenty minutes. We treated ourselves to a ride on the ICE train for our homeward journey.

If all this hasn’t whetted your appetite, then perhaps some of the photos used in this post might, and even if you are not keen on beer, I can still recommend Regensburg as a great place for chilling out and spending a relaxing few days.

I'm enjoying the detail already Paul. As you say, Nuremberg really is a gateway to a vast area. I've been 3 times now and the fast tram to the centre is a joy.

Interesting to hear Regensberg had so many tourists, though that's true of much of urban Bavaria.

I flew to Nuremberg and then caught the U-Bahn and RE train when I went to Bamberg a couple of years ago. Like you, the only other English-speaking tourists I saw in Upper Franconia were Americans. I think it goes back to the area being in their Zone of Occupation after 1945: the Americans I ended up chatting to in Brauerei Spezial had come to see the place because their grandad had been stationed at the nearby US Army base.

Glad you enjoyed the photos Martin. There are plenty more to come. It looks like Ryanair are expanding their operation in Nuremberg, as whilst at the airport I saw a poster advertising they had opened five new routes from the city, including one to Manchester. We also noticed that they fly to Alicante.

Matt I agree with your observations about the US Forces and their descendants. Until recently there was a large US Army Barracks on the outskirts of Bamberg. I understand it is being converted to house the many refugees who have come to Germany, trying to escape the ongoing conflicts in the Middle East.

Several of the Americans I have met on my travels, seem pretty clued up on German beer; especially regarding what is available in Franconia.