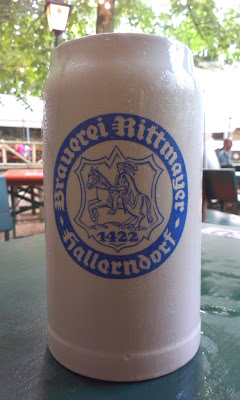 A litre is not a sensible measure for drinking beer. I say this after my recent visit to Annafest where the litre, or Maß (Mass) to give the unit its correct name, was the only measure beer was sold in. This, combined with the fact that most of the Kellers only stocked a strong “Festbier” with an abv of around 5.7%, meant it was necessary to pace one’s self very carefully when it came to knocking back the beer. Fortunately most of the Maß mugs were stoneware, rather than glass, so this at least helped the beer to remain cooler for longer.

Unlike the southern half of Bavaria, especially the area around Munich, Maß measures are relatively uncommon in Franconia, with much more sensible stoneware half litre mugs, known as Steinkrug or Krug, (but never “Stein”), the norm in most pubs. Jon Connen confirms this in his “Guide to Bamberg & Franconia”, stating “Litre measures are the exception rather than the rule in Franconian beer gardens. Franconians tend to consume more beer with less fuss than the macho Bavarians of Munich.” It was therefore doubly strange to see them being used at Annafest.

Litres, of course, are roughly the equivalent of an imperial quart. I say roughly, because a quart actually works out at 1.136 litres, so the Maß is slightly less than two pints. Leaving this small difference aside for a moment, when was the last time you saw anyone drinking out of a quart pot in an English pub? Your most likely answer is, like my own, never, but quart measures were relatively common in England, back in the times of Charles Dickens, and I’m not certain when they fell out of favour. For some reason though this heavy and cumbersome measure has continued to be used in southern Germany. 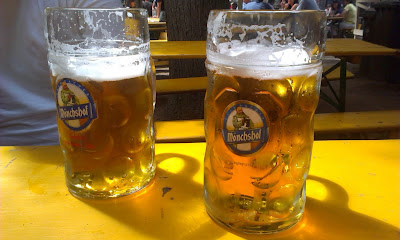 I have three main criticisms of the Maß, the first of which concerns the weight of the vessel itself plus that of the contents, ( one litre of beer will weigh approximately one kilogramme). The second is the beer slips down a bit too readily, and the mistake I always make is by the time I’m on my second Maß the first has started to kick in, and it’s then I realise that ordering a second one was not such a good idea.! The third, of course, is that I like to sample as many different beers as possible, especially when I am visiting somewhere for the first time. Volume and alcoholic strength constraints make the Maß a most impractical vessel for the beer connoisseur. I’m not saying the Bavarians  should go the whole hog and offer the equivalent of the third or half pint measures one sees at beer festivals here in the UK, or the “thimbles” used at the Great American Beer Festival, but there has to be a happy medium somewhere along the line.

Perhaps what this all boils down to is that centuries of usage have proven the English pint to be the perfect measure for social beer drinking. What do other people think?

Yes, I'd go with pints too. Do you think we may be biased though?

Many years ago, a local CAMRA member used to keep a quart glass behind the bar of one of his favourite pubs. (Having said that, this individual did tend to drink rather more than was good for him).

I also remember Spoons experimenting with 30 oz glasses a few years back.

We may very well be biased Ed, but it's probably a case of what we're used to and feel comfortable with.
I think I vaguely recal Spoons trialling 30oz glasses Curmudgeon, but the fact they're not around today proves they weren't a success. I also remember getting terribly confused over 18 and 22oz glasses in the United States.

I still feel that the pint (and by default the half litre) is the optimum measure for social drinking, (I'll exclude the use of smaller glasses for beer sampling purposes). Litres, as I've already stated are just too big and cumbersome, whilst the 20 or 30cl glasses popular in the Rhineland (Cologne & Dusseldorf) are just too small, and mean constantly having to attract the waiter's attention for a refill. They also seem to work out more expensive on a measure for measure basis of beer.

The pint is the perfect measure as far as I'm concerned, and I'm glad the EU has granted us a permanent exemption from having to adopt metric measures for beer.

Curmudgeon, I forgot to ask whether the CAMRA member you refer to is still with us? I ask the question because you said he tended to drink rather more than was good for him!

Then perfect measure is 440ml of fosters ice cold swigged from the can.