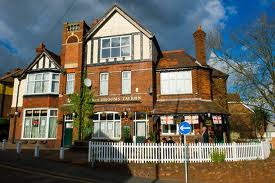 Back in June I posted about the successful opening of the Windmill at Weald, describing how new owners had rescued this run-down Greene King pub from almost certain closure, completely renovated the place and turned the pub into a thriving village local selling a wide range of locally brewed ales, and offering a selection of excellent home-cooked food. A real success story, if you like. Now I am pleased to report another success; this time concerning a town pub rather than a rural one.


High Brooms is a suburb of Tunbridge Wells. I’m not certain how it acquired its rather grandiose title, but it’s not the grandest of places. Although nearer to Tunbridge Wells, High Brooms is the intermediate station on the railway between Tonbridge and Tunbridge Wells, and has developed into a popular domicile for commuters, given the slightly lower property prices, compared to its near neighbours, and the good, semi-fast rail connection to London. 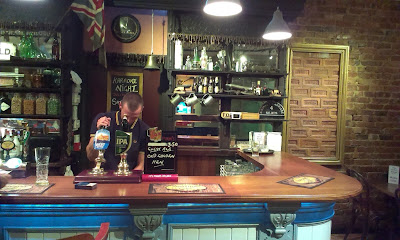 The High Brooms Hotel was built back in 1899, and is a substantial three storey detached brick built property. It stands in a prominent position looking back down the hill towards the station. I don’t know when the building ceased to be a hotel, but it must have been quite some time before I first knew it. That was back in the mid 1980’s, when I worked a short distance away from the pub, and would sometimes call in for a pint at lunchtimes. It was owned then by Beards of Lewes. Beards were a pub-owning, former brewery that had ceased brewing in the late 1950’s, supposedly because of a yeast infection, but more likely because their brewery premises in Star Lane, Lewes were rather cramped and in need of updating. The company entered into an agreement with Harvey’s, whereby they would purchase beer from their Lewes neighbours and sell it under their own name. I distinctly remember drinking Beards Sussex Best Bitter during the early 80’s, and seeing the same range of bottles which Harvey’s produce with Beards labels on them. 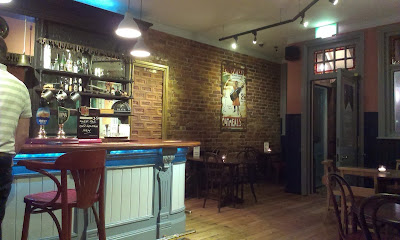 I’m not sure exactly when this practice ceased, but during the mid-1980’s, Beards branched out into wholesaling, and operated out of premises in nearby Hailsham. This operation was eventually floated off and became “The Beer Seller”. We all know what happened to them, but Beards continued to operate their pubs in much the same way as before.  Then in 1998, the company sold their 40 or so pubs to Greene King, in a move which shocked local drinkers. Rumour has it that it also shocked Harvey’s, who had always been under the impression they would get “first refusal” on Beards, should the company ever come up for sale!

After a short period of adjustment, Greene King quietly set about restyling the pubs as their own and removing Harvey’s beers from their new acquisitions, much to the annoyance of local drinkers. The disappearance of Harvey’s from the High Brooms Tavern, as it was now called, coupled with the fact I was no longer working in the area, meant my visits to the pub became few and far between. I know the pub continued to thrive as a community local under landlord Roy Gibb, and acquired a bit of a name for itself because of the large amount of bric-a-brac and other assorted memorabilia on display there. It was also home to various darts and pool teams, plus the local ukulele club! 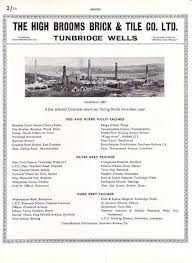 Roy retired in July last year and the pub closed. It did obviously not fit in with Greene King’s plans for their tied estate so they put the High Brooms Tavern up for sale. Although the company did leave things open for the building to continue as a pub, there was a real threat it would be bought by a developer and converted to alternative use, or even demolished. (The pub occupies quite a prominent site, just a short hop from the station). A local campaign was set up, with backing from West Kent CAMRA, to try and save the pub and to try and get it re-opened. Fortunately local residents Peter Whitaker and his son Greg, bought the pub in March this year, and then spent the next four months carrying out an extensive renovation plus a complete refit of this 19th Century building.

The result, when the pub re-opened last month, is a bright and airy pub, which retains much of the original layout, but with sensitive restoration of some of the building’s best features. The pub has been renamed the “Brick Works” in memory of this once thriving local industry. The remains of a substantial quarry where clay for making bricks was once extracted, can be seen a couple of streets away. (The quarry now houses a small industrial estate). There is a door way in the pub which has been bricked-up using old bricks from the local works, which are stamped with the words “Tunbridge Wells”. 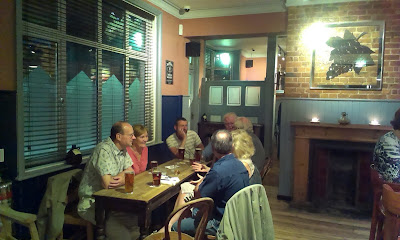 We held a well-attended branch social at the pub, earlier in the week, and were all impressed with the way the pub has been renovated. We were also pleased to see the pub well-used by a mainly young clientele, with the darts and pool area particularly well-patronised. Beer-wise there was Greene King IPA and Golden Hen on sale, alongside the regular’s old favourite, Harvey’s Best!

The beers were all in good form, and it was encouraging to see the pub thriving once more, after having a new lease of life breathed into it. Not all closed pubs though are lucky enough to be bought by sympathetic new owners, but meanwhile the residents of High Brooms, and visitors from further afield, have cause to raise their glasses and be thankful to Peter and Greg Whitaker.

Ps. there is even more good news about another formerly closed pub, also in High Brooms, and this time it’s Greene King who are the heroes, rather than the villains of the peace. I will postpone reporting on the pub until I have had the chance to visit it myself.

Like rebuilding a vintage Ferarri and then putting an old moped engine in it - In this day and age with an untold wealth of new and exciting beers available? Sad to say, but I hope it fails along with the other 3999 crap pubs marked for the chop.

I'm pleased to hear about the possibility of decent beer near Southborough, where my in-laws live (post Bat and Ball or whatever it was called it's not great).

Bit cheeky to ask, but my new beer guide hasn't arrived yet and I'm down that way at the weekend; are there any new GBG entries I should be aware of (I'd arrange my inlaws visit to coincide with the new issue !)

Words fail me, anonymous Matt at your narrow-minded, jaundiced view of the world. To wish ill of decent hard-working people who have put their hearts and souls, to say nothing of a considerable amount of their own money, into getting this pub up and running again is beyond contempt! Haven't you ever heard of Karma?

I suggest you start living in the real world, and step outside the fancy bubble of trendy London bars selling over-priced, over-hyped poncy so-called craft beer.

martin, Cambridge - unfortunately I am not party to the entries for the new GBG, as for the past two years I have not been a member of the local branch committee.

Yes, I remember the Bat & Ball in Southborough when it was a decent pub, (we're talking 20 years or more ago). The pub is a Thai Restaurant nowadays!

Southborough hasn't really got much going for it beer-wise, but it's not that far from Sankeys in Tunbridge Wells, or the Bedford and the Royal Oak for that matter.

In the other direction, the Weavers often has something unusual on, but the quality can vary somewhat.

Further a field, the Windmill at Sevenoaks Weald is definitely worthy of a visit,(good food and an excellent choice of locally brewed beers). I do know that this one is a new GBG entry.

There is a depressing emphasis on the "new" above the good in a significant number of pub reviews, often observed in some CAMRA branch newsletters e.g. "we looked in Pub x and it only had bland big brewery beers, (typically Greene King, Pedigree, Wainwright etc) so we moved on to a pub with micro/craft beer". Beers from these consistent breweries would have been sought out not long ago.

I did pop in the Bedford in Wells recently, and the IPA (judged bitter of the year 06) was excellent. Good luck to the Brick Works.

I miss the old High Brooms Tavern (by the tim it closed it was a positive Aladin's Cave) but great to have the pub reopen.

High Brooms because it's on a hill and a 'broom' is a type of flower, of which there were once a lot. So nothing grandiose about it. I grew up there, it's not the nicest place to be. And if I wanted a beer, i would always head to 'the weavers'. A little pricey but they had some nice real ales in there.