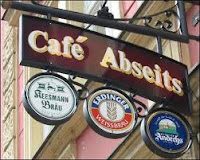 Café Abseits, in Bamberg, is one of those places I’d always meant to visit, but somehow never quite got round to doing so, despite having made three previous visits to the city. Billed as Bamberg’s “premier beer speciality pub”, Café Abseits is tucked away down a side street on the “wrong side of the tracks”, to the east of the station. However our recent visit to Franconia included a day spent in Bamberg, and whilst on this occasion we didn’t manage to visit the pub, we did notice a newly constructed entrance to the station on the eastern side; a facility we were to make use of on a return visit a couple of days later.


We had spent the first part of the day in Coburg, a town which is almost as far north as one can travel and still be in Bavaria. It was a blisteringly hot day; far too hot unfortunately to climb up to the impressive Veste (fortress) Coburg, which overlooks the town. Instead we found a backstreet pub, (the Bratwurstglöcke) with some nice shaded outside tables where we could sit in the relative cool and enjoy a couple of mugs of locally-brewed Coburger Brauerei beers. The plan was to stop off in Bamberg on our return journey to Forchheim, in order to pick up some bottles from the shop attached to the internationally-renowned Weyermann Maltings, which are on the east side of the station.

I had taken the precaution of  contacting the company by email, to confirm the opening times of the shop, but unfortunately their reply contained an error and did not state  that on Friday’s the shop closed at 3pm, an hour earlier than we were anticipating. My son was not best pleased after having walked up, through the swelteringly hot heat, to find the place closed. I wasn’t over impressed either, but put the mistake down to experience, and made a mental note to call back on a future visit. I then began to quickly search for somewhere where we could grab a beer and cool off.

Fortunately I had with me Jon Conen’s excellent “Guide to Bamberg & Franconia”, an essential travelling companion in this part of the world. The nearest pub to us was Café Abseits, less than 10 minutes walk away and, what’s more, it was described as having a beer garden attached as well.

We found the pub without too much trouble, and walked through the side entrance straight to the aforementioned garden, which was at the rear of the pub. Fortunately, given the extreme heat, the garden was nice and shady and we were soon sat at a table studying the beer menu prior to the arrival of the waiter. I opted for the Huppendorfer Vollbier, an amber coloured and well-hopped beer from the village of the same name, situated in the Fränkische Scheiz, (Franconian Switzerland) area to the east of Bamberg. Matthew’s choice was Mönchsambacher Lager, a much paler beer from Mönchsambach, a village to the west of the city, in the area known as the Steigerwald. He followed that up with another of the same, whilst I went for the Gänstaller Kellerbier; origin unknown, but very drinkable all the same.

We weren’t the only visitors from England that day. Sitting a few tables away from us we couldn’t help over-hearing a group of men speaking in our mother tongue. After a while, I went over and had a word with them. It turned out they were a group of beer enthusiasts, (I didn’t ask whether they were CAMRA members or not), from Nottingham, doing much the same as us really – spending a few days at Annafest, interspersed with visits to other towns and villages in order to track down and sample some of the local beers. They were staying in nearby Buttenheim, at the Löwenbräu Brauerei – one of two neighbouring breweries in the village. We swapped notes and shared a few recommendations, one of which we decided to follow the following day.

The beer enthusiasts left, shortly before us, but before we departed I had a closer look at Café Abseits’s beer extensive list (see photo’s). As well as the three draught beers already mentioned, the pub carries a wide range of bottles, including a number from the pilot brew-plant at Weyermann Maltings, home of our abortive visit earlier. There were also some examples of what, for Germany, can only be described as experimental styles of beer, such as pale ale and porter!

We decided to leave such beery delights for another occasion, as Café Abseits’s is definitely somewhere worthy of a much longer visit. Not only that, with the weather as hot as it was, we never got to see the inside of the pub, having spent the whole of our visit in the garden at the rear. However, at least I can now say I’ve visited Bamberg’s “premier beer speciality pub”. As for the pub's unusual name, it apparently translates as "the other place", so now you know!
Posted by Paul Bailey at 23:08