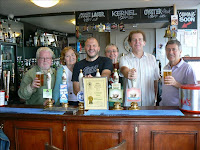 Last Saturday, along with a handful of other West Kent CAMRA members, I had cause to visit north Kent. Now this is not a part of the county which I’d normally entertain going to, but we were on a mission to present a certificate for “Beer of the Festival” to the Caveman Brewery of Swanscombe. The festival in question was last year’s Spa Valley Rail and Ale Festival, and the beer concerned was Caveman’s first brew, Citra.

Caveman Brewery is housed in the cellar of the George and Dragon, a Victorian town pub, which is just a stone’s throw from Swanscombe station. Swanscombe itself is a small town on the Thames Estuary, a few miles to the east of Dartford. Until recent times it was a centre of the cement industry, but this has gradually declined and the whole area now seems somewhat down at heel. This is despite the presence nearby of the Bluewater Shopping Centre, one of the largest in Europe. 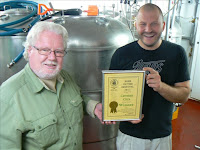 Still it was beer and not shops that we were after, and where better than the George and Dragon as it has just been voted Pub of the Year for the West Kent area. This is quite an achievement for a pub which, until recently, had seen better times, but 18 months ago it was acquired by licensees Bob and Bron Veal, who set about transforming the place to create a bright and airy drinking environment. They still have plenty of work to do, especially to the pub’s exterior, but according to Bron the main priority was to get the inside of the pub up to a suitable standard, so they could start trading. Apparently the George and Dragon had a bad reputation under its previous owners (Admiral Taverns), and suffered from druggies and other undesirables. Bron told us many of them were dissuaded from renewing their custom by the pub’s policy of concentrating on micro-breweries beers, including the pub’s own, with Chapel Down’s Curious Brew from Tenterden, to cater for lager drinkers instead of multi-national global brands such as Fosters, Stella et al.(Sounds like a good idea to me!)

The policy has obviously worked as today the George and Dragon is a friendly and welcoming community pub, offering a wide selection of quality cask ales alongside Kernel Centennial and Whitstable Oyster Stout on keg, some excellent genuinely home-cooked food – which we partook of ourselves, and hosting all sorts of events, including live music and fund-raising activities. As mentioned earlier, the pub is also home to the Caveman Brewery, and we were fortunate to have been given a guided tour by James Hayward, brewer and one of the two partners behind the operation, (Nick Byram is the other one).

We descended the slightly tricky and steep stairs down into the extensive cellar, or “cave”, beneath the pub. Here the partners have managed to shoe-horn in a full-mash brewing plant, together with four fermenters, plus have fitted out a separate cold room for storage of both their beer, plus casks ready stillaged for serving in the pub upstairs. It is quite an achievement, especially as draining, extraction and a hoist all had to be installed as well. It is even more of an achievement when one learns that both partners have full-time jobs in addition to running the brewery!

So what of our visit? Well the pub had enjoyed a  busy Friday night prior to our visit, and the barman, whose name I forget now, was busy pulling through a couple more beers when we arrived. I started off with Moor Top Pale Ale from Buxton Brewery, a very pale and well-hopped 3.8% beer which was just the thing after a lengthy train journey. I followed it with a couple of Caveman brews – Palaeolithic Pale Ale, another 3.8% beer flavoured with Cascade hops, before moving onto the much stronger 5.9% Megalithic. I preferred this to the Palaeolithic, and found it the perfect accompaniment to my steak and ale pie, served up in a gargantuan portion with new potatoes and seasonal vegetables. Just the thing for a hungry imbiber!

We left the George and Dragon around 3pm, to make the short train journey to Dartford, where we planned to visit the town’s Working Men’s Club. The club itself  is worthy of a separate post, so I won’t say anymore here apart from that a visit to both these establishments makes the journey to this very run down and neglected part of the Garden of England well worthwhile.

Caveman Citra is often available in London and a very good beer too. I have favourably mentioned it in my blog before.

Unfortunately Citra won't be available at our festival in October. Demand for the aromatic Citra hop has outstripped supply, and despite rationing on the part of the various hop merchants, Caveman were unable to secure a supply.

James thinks this is because, until quite recently, they were a "cuckoo brewery", producing their beers at Kent Brewery's premises until their own "cave", at the George & Dragon had been fitted out and come on stream. They do include a "Chinook" single-hop ale in their portfolio though.