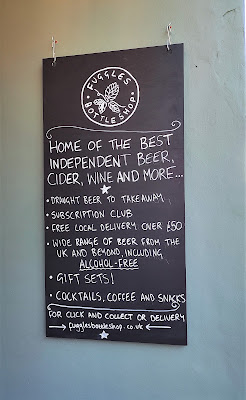 You left me back in Tunbridge Wells, having just alighted from the 256 bus back from Hook Green. It was just after 2.15pm and I was under strict instructions from Mrs PBT’s not to be back too early and interrupt her afternoon’s TV viewing. That was fine by me, and I needed no more in the way of encouragement to find another pub.

First, I needed to get shot of some excess beer, as despite making use of the Elephant Head’s facilities just before leaving, I arrived back in town in need of another pee. Something to do with my age, possibly? It was only a short hop to the Royal Victoria Place, Tunbridge Wells’ main shopping centre, where not only could find relief, but I could also grab a coffee.

On the way, I passed the Cotswold Outdoors Store where, last April, I had purchased my new hiking boots. I noticed the store had ceased trading, which tied in with what some of the old girls on the bus had been saying, on the outward journey. It always pays to keep one’s eyes and ears open, as you never know what snippet of useful information you might pick up! 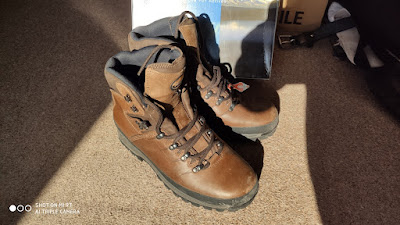 Cotswold being closed was rather sad really, as I’d made a point of choosing and purchasing my boots in their store, especially as they offered a fitting service. This is important when choosing footwear that will cushion your foot when crossing rough terrain, keep your feet dry and support your ankle, as you want all these features, combined with comfort as well. If you are prepared to splash out a couple of hundred pounds, to obtain this, then you really should not only try before you buy but get some expert advice and help with the fitting as well. 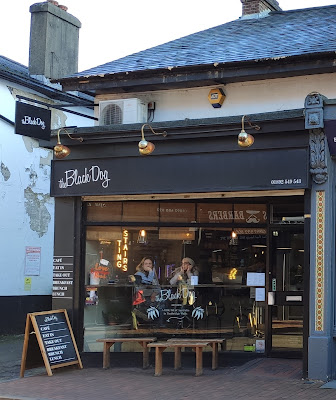 Moving swiftly on, the Royal Victoria Place has had something of a makeover and was looking quite smart. Unfortunately, looking your best still doesn’t make up for the lack of shops, and the centre has never really got over the loss of BHS. Top Shop was also empty, not that I was ever a fan of their over-priced and ultra, slim fit clothes. Perhaps if they’d stocked clothes for more normal sized people, they might still be trading, but as I’m not a fashionista, I don’t really know.

Coffee proved hard to come by too, as the food hall, right on the lowest floor, hasn’t opened post-pandemic, and in addition, the company that owns the Central Market, in Ely Court, has gone into administration.  Undeterred, I left the RVP at the Camden Road exit, and more or less straight away, spied a coffee shop. The Australian owned and run Black Dog proved just the ticket, particularly as I much prefer independent cafés to those operated by the large chains. 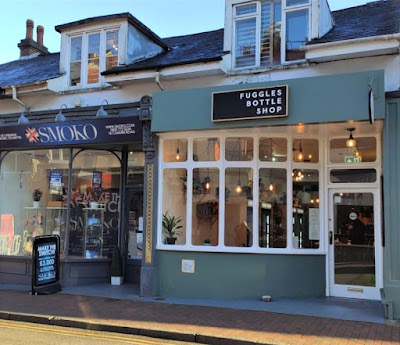 The place was pretty crowded, so after requesting a flat-white to takeaway, I sat outside on one of the benches, soaking up the sun whilst watching the world go by. Whilst enjoying my tasty and freshly brewed coffee, I glanced up and noticed, through the glare of the sunshine, Fuggles recently opened Bottle Shop. This was my next planned port of call, and I was pleasantly surprised to find it at the top end of Camden Road, rather than where I’d expected it to be – at other end.

So, pleased to have saved myself an unnecessary walk, I popped inside. As expected, I found a well-stocked shop with an excellent selection of beers, including some to take away on draft. 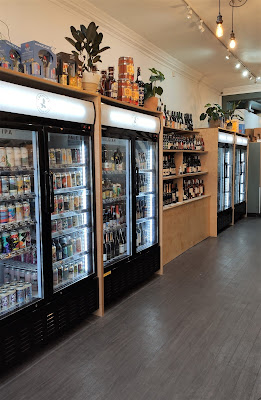 The latter are dispensed into returnable PET bottles, either one or two litres, but it was bottled beer I was after and some German ones at that! I treated myself to five different bottles, which was as much as I could fit into my rucksack.

My selection included the rare smoked Bock bier from Schlenkerla in Bamberg. This 8.0% Rauchbier is brewed from malt that has been kilned over oak logs, rather than the usual beech ones. The oak is said to impart a unique flavour to the malt. I tried the beer once, on draft and in Bamberg itself, but that was over a decade ago.   Also on the list was the more usual Schlenkerla Märzen, a winter bier from Höfbräu of Munich, a pilsner from Tegernsee – the brewery by the lake, and Rothaus Pils – a beer that is highly recommended by legendary landlord and now, occasional blogger, Jeff Bell aka “Stonch.”

After a brief chat with the young gentleman in charge of the Bottle Shop and complementing him on the selection and presentation of the beers, I headed along to my final port of call. This was the Royal Oak, an attractive looking town pub, with a history and heritage longer than is initially apparent. Just over five minutes’ walk from the Calverley Road shops, and around 10 minutes’ walk from the main railway station, the Oak offers a carefully chosen selection of mainly locally sourced beers, alongside a number of craft beers and ciders. Good, solid pub food is also available Wednesdays to Sundays. 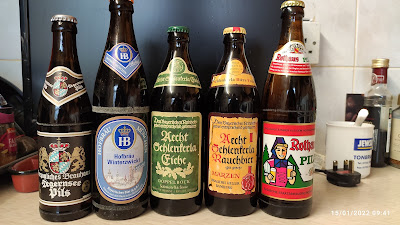 The pub’s current licensee is a former chairman of West Kent CAMRA, and since taking over the ownership and running of the Royal Oak in 2016, he has carried out a number of improvements, and turned it into a successful and thriving community local. To my shame, I hadn’t been to the Royal Oak for quite a few years; an omission that predates the start of the pandemic, so my visit was long overdue. 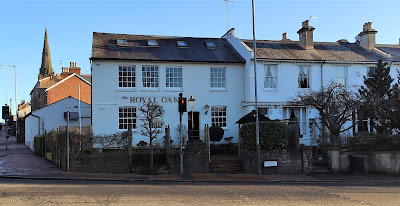 I arrived at the Oak, just after 3pm. There were a couple of builder types standing at the bar, towards the rear of the pub, who were later joined by another tradesman accompanied by an enormous dog. Four cask ales were on offer, including XPA from Five Points Brewing and Golden Rule from Tonbridge Brewery. My eyes were drawn though to one of my favourite dark ales- Harvey’s XXXX Old Ale. 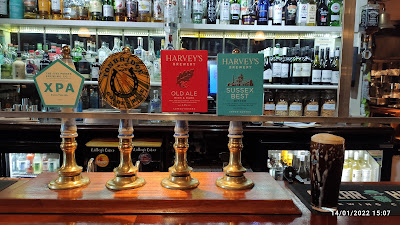 Having missed its presence at the Elephants Head, I was especially glad to see it on sale at the Royal Oak. I ordered myself a pint, and retreated to a corner opposite the bar, to enjoy the Old, and observe the goings on in the rest of the pub. One observation that never ceases to amaze, and also disappoint me, is the lager drinkers who choose a well-known international brand, over a quality brew with a real pedigree. In this case, it was the tradesmen knocking back pints of San Miguel in preference to the excellent Hofmeister – now a proper German Helles, brewed in the heart of Bavaria. 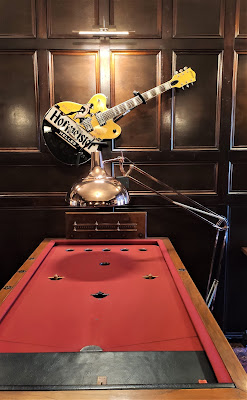 The power of mass-advertising, I suppose, but also the age-old fear of trying something different and unfamiliar. It also seemed sad that I was the only person drinking the cask, but it was early days as the pub hadn’t been open that long. Tempted as I was to double the Oak’s cask sales that afternoon, I decided it was time to make tracks, and take the bus home. Thanks to my Arriva app, I discovered there was a No. 7 bus back to Tonbridge, departing at 16.30.

I drank up and made my way along to Grosvenor Road, under the impression I had managed to avoid the plague carriers school kids that Mrs PBT’s had told me to be wary of. Unfortunately, the school day must have been lengthened, to allow the precious darlings scholars, the chance to catch up with their studies, following the various lock-downs. This meant the bus was rather crowded, something not helped by it being a single deck vehicle, rather than a double-decker.

I wasn’t overly concerned as the window were open, and most passengers were masked, and if anything, it reminded me of pre-pandemic days. I didn’t tell Mrs PBT’s when I arrived home, as she worries about these things, and more importantly, I didn’t want her to curtail these trips out by bus that I have been making recently. 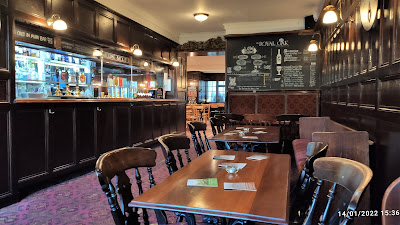 As for the title of these two posts, the day involved me visiting one coffee shop and one beer shop. I spent time in two pubs and drank a total of three pints of beer. Finally, I used five different buses to get from my home to Hook Green and back again, stopping off at Tunbridge Wells in between. There are plenty more interesting pubs to visit, by bus, which means lots more adventures to describe.
Posted by Paul Bailey at 23:14

I am averse to responding to a blog post on this minute level, but upon espying the bottle of Rothaus Pils herein, query if Rothaus was this prevalent in the U.K. prior to 2021?
Because here in the U.S.A., somebody associated with Rothaus managed to make a stir about its brews becoming available.
A regionally-large liquor store chain, Binny's cut a deal for one of Rothaus' beers to be a 'feature' offering for it. There was a loophole for other Rothaus brews, of which included its Eis Zäpfle Original Black Forest Märzen, (5.7% ABV) and I scarfed two 6-packs of 36 cL (12.2 fl. oz.) from The Beer Temple, a "slashie" store with both package offerings and a multi-tap bar, which, should you ever get to Chicago, U.S.A., I keenly recommend.
The particular brown-glass bottle for the Märzen was a fancy type with upraised lettering, a logo, and a silver crown helmet. (The beer for Binny's had a golden crown helmet.)
I know not if your readers need this information; but being from a journalist background, I include it: The beer's U.S.A. importer is St. Killian's Importing Co., Inc.; Everett, MA. 02149

Hi Steve D, to answer your question, I would say that Rothaus beers were almost unknown in the UK, prior to 2021, and the same still applies.

I only know one pub selling Rothaus on draft - the Ypres Castle, in the former Cinque Port town of Rye, East Sussex. In addition, the only off-license stocking bottle Rothaus, that I am familiar with, is Beers of Europe, just outside Kings Lynn, on the edge of the Fens. It is a massive beer warehouse, and most of the sales are mail-order, although customers can just turn up and buy as well.

I'm not sure where my local shop Fuggles got hold of their stock, or whether the beer will feature as a regular, on their list, but I will ask the question, next time I'm in there.