Swanning around and larking about. Some nostalgic over-indulgence in "Little Church" 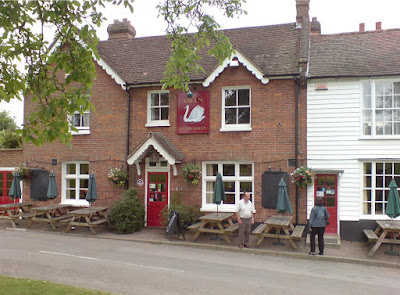 Several posts ago, I described how I’d inadvertently walked onto a film set, in the tiny village of West Peckham. The incident occurred on what was my first official Monday off from work, following my recent switch to part-time working.

I’d caught the No. 7 bus to nearby Mereworth, and then walked the mile and a quarter or so towards West Peckham, and its pub, the Swan-on-the-Green. Until a couple of decades or so, the Swan was an attractive, but otherwise unremarkable pub facing the village green. From memory it was a Courage house, although prior to that it would have belonged to a more local brewer. Style & Winch, of Maidstone spring to mind, as it was the acquisition of the latter by Barclay Perkins of London, that led to them becoming part of the Courage empire. 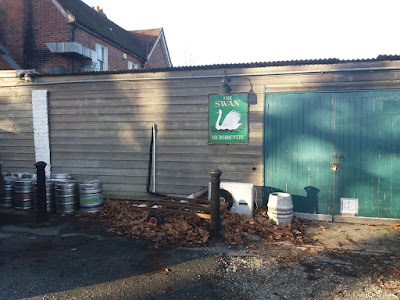 Today, the Swan brews its own range of beers, and has done so since 2000. Eight cask ales are produced, and the majority are named with a “Swan” theme (Bewick, Cygnet, Trumpeter and Whooper). They are all brewed in an outbuilding at the rear of the pub. The prospect of sampling one or two of these beers, was the driving force behind my visit, just under a fortnight ago.


I’d last set foot inside the Swan, in January 2018, whilst on my way home from visiting Mrs PBT’s in Maidstone hospital. She was quite poorly at the time and occupying a bed in the hospital’s ICU. I won’t go into detail, apart from saying if your gut feeling, about someone close to you, is saying something isn’t right, but they’re insisting that they are perfectly fine, then listen to your instincts and act accordingly! 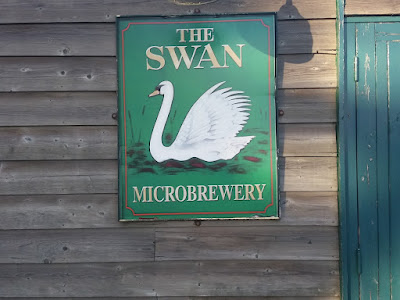 Fortunately, Eileen made a full recovery, thanks to the skills of the dedicated doctors and nurses who make up the NHS, but it was a scary time for all of us. You can read about that January 2018 visit here, and also learn more about the Swan and its long-established, micro-brewery. As I said at the time, the pub must be doing something right to still be brewing its own beer after all this time. I also find it encouraging that, unlike some outlets, they haven’t been tempted to produce loads of different “seasonal” beers or, worse still, umpteen one-off “specials”.

Returning to the present, I can now provide the answer to what was going on in West Peckham at the beginning of the month, and why was the Swan decked out in a variety of old-looking, but entirely fictitious brewery signs? 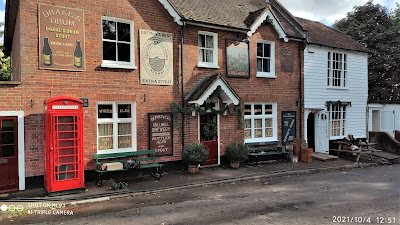 When I was told the pub was shut and saw the film crew at work, I soon twigged what they were filming. A few months previously I’d seen a story in one of the local rags that the Swan, and a few other parts of West Peckham, would be providing the setting and backdrop for a new TV production of “The Darling Buds of May.”

The original series was produced by Yorkshire Television, and starred David Jason, Pam Ferris, and a young Catherine Zeta-Jones. Based on the "Pop Larkins Chronicles," by the author, H.E. Bates, the series first aired in the early 90’s and proved an instant hit with viewers. It follows the adventures of the slightly roughish Larkin’s family, and their large brood of six children, who live on a dilapidated farm, in 1950’s rural Kent. 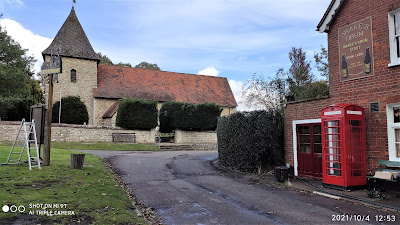 Shooting for the new series began earlier this year, with various locations in the county chosen as suitable backdrops for the filming. I noticed on my visit that West Peckham had been re-named as “Little Church,” and the Swan re-badged as the Hare & Hounds.  Actor and presenter Bradley Walsh has been cast as “Pop” Larkin, with Joanna Scanlan as “Ma.” Former Dr Who star, Peter Davison features as the rather cantankerous village vicar. 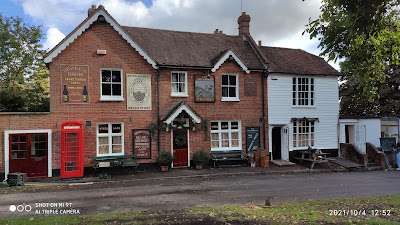 All was revealed last Sunday evening, when the re-made series aired, under the name “The Larkins.” Watching the programme with Mrs PBT’s confirmed that the Swan and West Peckham were indeed the re-named locations described above, with the extensive green in front of the pub acting as the setting for the village fete. The filming I inadvertently walked in on, will apparently form part of the series’ Christmas Special.

The Larkins hasn’t been that well received, so far, by the critics, with some describing it as too “woke.” I've no intention of getting into that debate, but Mrs PBT’s and I both found it an entertaining and light-hearted piece of escapism, of the same genre as other Sunday evening productions, such as Heartbeat, Bergerac, Midsomer Murders, and Morse. 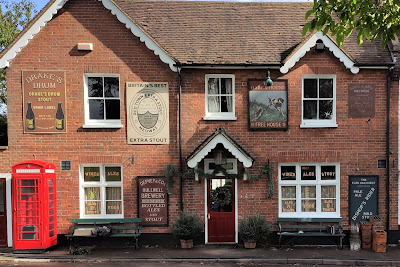 The one criticism I would make, relates to my interest in bygone breweries and their pubs. In my view,
the props department tried rather too hard with the makeover of the Swan. Covering the exterior with all those fake signs was not only rather kitsch, but also historically inaccurate.  A look at any pub photos from that period (late 1950’s), shows that brewery advertising was, if anything, very understated.

You might see the name of the owning brewery, alongside the pub name, but that would be it. These faux signs, that are all too common these days, were never mirrored in real life. It’s as though the directors are spoon-feeding their audience, and hoodwinking them into thinking they’ve been transported back to a bygone age.

These gripes aside, as a piece of unashamed escapism, The Larkins is well worth a look, and all the more so if you’re a fan of mid-twentieth century nostalgia.

Remaking the "Darling Buds of May" ? Is nothing sacred ?!

Remakes seem to be the way to go - and no, nothing is sacred anymore!