Fond memories of a few beers by the lake 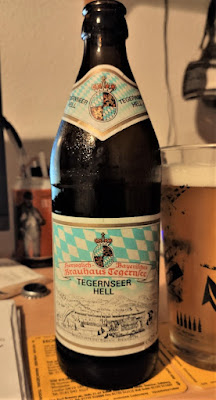 Opening a bottle of beer can sometimes bring back memories – happy memories, not just of the beer itself, but also of the place where you might have consumed it. If that place happened to be the location from where the beer originates, then the memories become even more special and if the that particular spot was somewhere overseas, then those associations become even more significant and memorable.

Memories of one charming and picturesque location came flooding back the other day, when I cracked open a bottle of Tegernsee Hell. This typical Bavarian, pale-coloured full-beer, is brewed at the Herzoglich Bayerisches Brauhaus Tegernsee.  (Translation the "Ducal Bavarian Brewery of Tegernsee."

Tegernsee is a resort town in Bavaria, on the shore of Tegernsee lake, in the foothills of the Bavarian Alps, some 30 miles to the south of Munich. The brewery is located inside the north wing of the former Tegernsee Abbey and is owned by Maria Anna, Duchess in Bavaria, youngest daughter of Max, Duke in Bavaria.

I’ve made several day trips out to Tegernsee, whilst holidaying in Munich, travelling  by train courtesy of the Bayerische Oberlandbahn. BOB, as it is affectionately known, is a private rail company that operates train services between Munich and Tegernsee, along with a number of other nearby destinations. 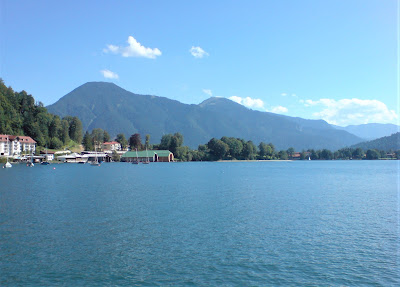 An hour or so after leaving Munich, the train exchanges the flat lands to the immediate south of the city, for the foothills of the Bavarian Alps. Then, as it approaches its destination, the vista gradually opens up to reveal lake Tegernsee unfolding below. After arriving at the station, at the top of the own, it is then a short distance walk down towards the lake, and the Herzoglich Brauhaus. 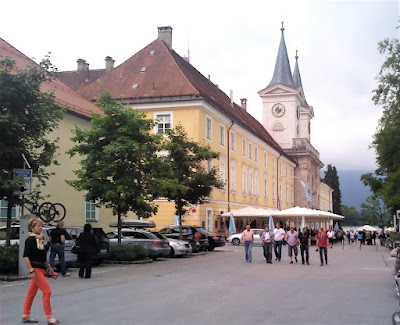 Tegernsee is an attractive small town with many buildings constructed in typical Alpine style. With their window boxes exhibiting colourful displays of geraniums, and other flowers, the whole place looked like a picture postcard. Tegernsee is nevertheless a busy working town, as well as a popular tourist destination, and the Bräustüberl overlooking the lake, is one of its most popular attractions so far as visitors are concerned.

The busy pub and restaurant is housed in former monastery buildings; although the ecclesiastical connection ended in 1803 when the abbey was secularised and taken over by a branch of the Bavarian Royal Family.  They have continued with the brewing business that was formerly conducted by the monks. 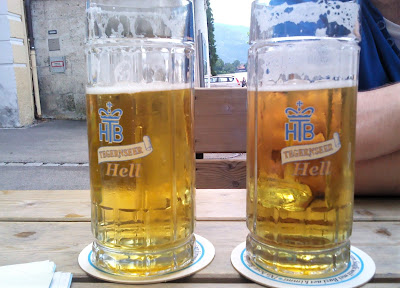 The   Bräustüberl is housed in a centuries old, vaulted beer hall, which provides welcome shelter during inclement weather, as well as warmth when temperatures are low, but when the sun is shining, there is nothing finer than sitting out at one of the many tables, at the front of the building and taking in the view of the lake.

I ought to qualify that last statement by adding, “whilst enjoying a few of Tegernsee’s finest beers.” I recall one memorable visit when son Matthew and I, sat out on these benches, shaded from the fierceness of the midday sun, by some large, vaulted umbrellas. 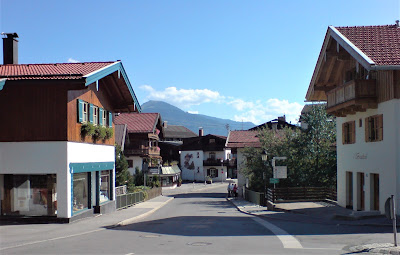 We had no difficulty in obtaining a seat, having arrived relatively early, but as the morning turned into afternoon the benches and tables started to fill up, as an increasing number of visitors began arriving. Many seemed to have either cycled (not much fun in such hilly countryside) or walked. One group told us they had been walking in the woods overlooking the lake for the past few hours and were now looking forward to a drink and something to eat.

We were already well stuck into the Tegernsee Hell – the beer that prompted this article. After enjoying a half litre glass each of this 4.8% beer, we moved on to the Spezial, which weighs in at 5.6%. The result is a beer that has much more body than the Hell. 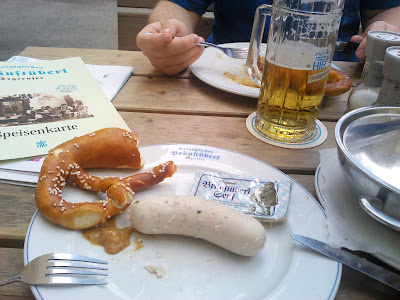 For lunch, I treated myself to a couple of Weisswurst - a Bavarian delicacy that I had been meaning to try for a long time. These white, anaemic-looking veal sausages arrived in a covered metal dish, swimming in hot water. They certainly tasted much better than they looked and went down well with some sweet Bavarian mustard and a Brezn or two.

So, with those pleasant memories of good beer, enjoyed in a spectacular Alpine setting, fresh in my mind, I’ll wrap this article up, with the proviso that the next trip I make to Munich, will definitely include a return visit to Tegernsee.

Thanks for that reminder of how I really want to get back to visiting Germany, Paul ! When do you think that might be feasible again ?

Glad you enjoyed the post, Martin. With regards to travel to Germany, as far as I can make out, it's still quite complicated.

The UK is designated as a ‘high-incidence area’ (no surprises there). You may enter Germany from the UK for any travel purpose if you are fully vaccinated. However, all travelers entering Germany from the UK are required to complete pre-departure digital registration, regardless of vaccination status.

Several colleagues, who have recently returned from overseas holidays, confirm that
none of this is as onerous as it seems. Things might well have changed too, by next Spring, which is when I am planning to go.

Next Spring sounds about right. Northern Bavaria in Spring is gorgeous. Can't be bothered with all that fuss and uncertainty at present and the cost of Covid tests outweighing the travel price !