Small steps back along the North Downs Way 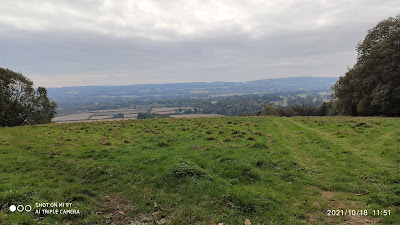 Last Monday I decided it was high time to hit the trail again – the trail being the North Downs Way. The last section of the trail I did was back in July, when I had to abort the walk after 5-6 miles, due to problem with my left knee. It locked up, making even the slightest lateral movements painful. I limped to the nearest pub, and called a taxi - after a well-earned pint, of course! 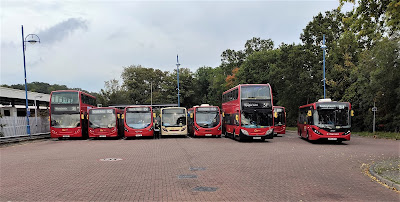 The problem cleared, after a day or so’s rest, and I was able to resume my normal lunchtime circular walk without any further trouble, but I was conscious of this happening again. After taking advice from colleagues, who are probably fitter than me, I looked around for a suitable knee restraint. I then encountered the new-age problem of far too much choice, and too many conflicting reviews – how do you tell which are genuine? 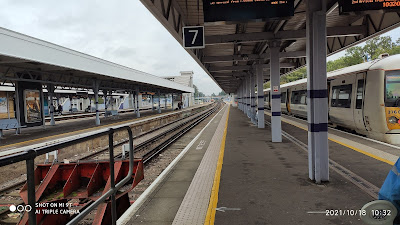 Eventually I bit the bullet and bought a suitable knee brace from a well-known online store, and it seemed to do the trick – more on that later. The logical next step was to attempt another hike, whilst wearing the brace, but I then came up against family concerns. Anyone would think I was hiking across Dartmoor or the Brecon Beacons, and it was son Matthew who showed himself as being far more concerned and protective than Mrs PBT’s. 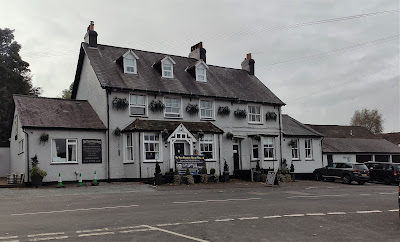 Her only concern was where exactly would I be walking, so I agreed to leave a synopsis and a sketched-out route for her, should the need arise. It was only a short walk to get me back in the swing of things, and basically involved finishing off the stretch I failed to complete last time.

I didn’t want to repeat any of the previous route, so the question was how to get to Knockholt Pound, and the Three Horseshoes, which was the point I’d limped to back in July?  Some online research revealed a bus service running from Orpington station to the pub. I could then walk the three and a half miles or so, to Dunton Green, from where I’d be able to take the train back to Tonbridge. Easy-peasy! 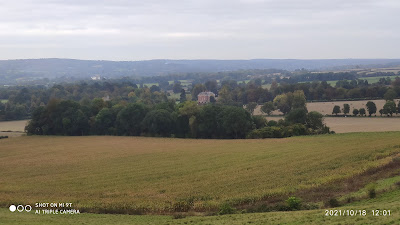 So last Monday, I used my Senior Railcard and took the train to Orpington. I then exited straight into the bus rank, on the north side of the station, and waited for the R05 bus. Bus travel is free for me, courtesy of my Senior Citizens Bus Pass, so once on the small, single-deck bus I enjoyed a half-hour journey, through leafy suburbia, out of Orpington, Green Street Green and the delightfully named Pratt’s Bottom. 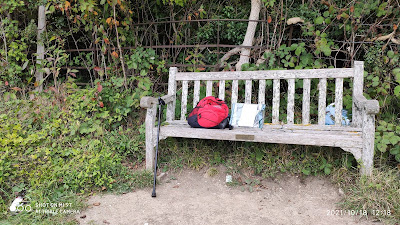 The bus deposited me, directly opposite the Three Horseshoes, and after crossing the road, I headed off along the narrow, but virtually traffic-free, Chipstead Lane. The bus had climbed steadily out of Pratt’s Bottom, and the road continued to do the same for a half-mile or so, before reaching the point where the NDW crosses. This is virtually the summit of this section of the North Downs, and after following the path steadily eastwards, it then turned sharply towards the south skirting an area of woodland. 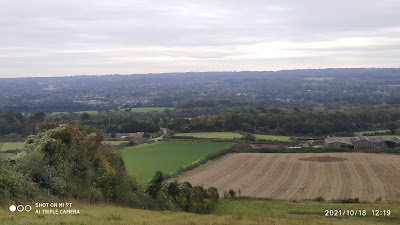 Emerging from the trees, I was rewarded with a spectacular view over the Vale of Holmesdale, spoiled somewhat by the presence (both visual as well as audible) of the M25 motorway. To my right I could see Chevening House and its surrounding parkland – the property being the official grace & favour home of the serving Foreign Secretary. I understand there is currently a bit of a spat going on, between the new incumbent Liz Truss, and the disgraced former holder of the position, Dominic Raab – he of the closed Cyprus beach fiasco, as to which of them has the right to use this imposing pile. 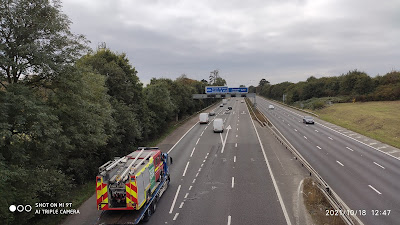 The pair certainly don't spoil another couple and with luck, they might end up battering each other to death, but I digress, as a long steep descent then followed, down from the top of the escarpment. Unfortunately, it led directly towards the noise of the encroaching London Orbital Motorway, but halfway down I noticed a handily situated bench, where I stopped to eat a couple of the cheese rolls, I’d packed in my rucksack.

Continuing my descent, I passed a farm, before joining the B2211 Chevening Road. The latter runs parallel to, and almost within touching distance of the M25. Then, after a right turn at a roundabout, it joins the A224 road, which runs down from Bromley. Fortunately, there is a pavement, and even better, it leaves the M25 behind. 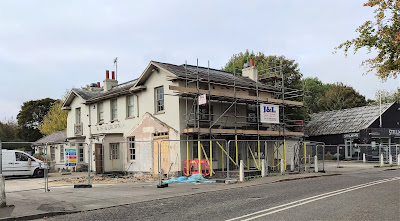 The relief is short-lived, as the road into Dunton Green crosses the M26, the so-called Wrotham Spur, that allows traffic travelling eastbound on the M20, to directly join the M25. This small section of Kent is definitely no place to live, if you wish to escape from traffic noise.

Prior to the bridge over the M26, a road forks off sharp left, towards Otford, and overlooking the junction is the imposing Rose & Crown. I might have once called in, back in the dim and distant past, but there was no chance of a drink, last Monday. The pub is currently closed, undergoing major renovation works, as the attached photo shows. Somewhat optimistically, it is supposed to be re-opening, in time for the Christmas period. 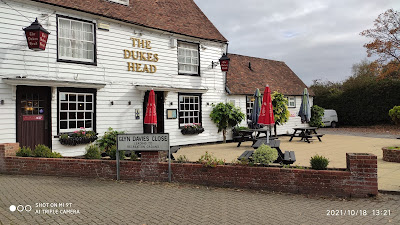 I carried on along the A224, crossing the bridge over the M26, when what did I spy in the distance? A pub, of course, but thinking it was the Miner’s Arms – a Greene King house I’ve never been overly struck on, paid little attention, until it came clearly into view.  It was in fact, the Duke’s Head, a white-painted and weather-boarded old pub which, I've never really noticed before, let alone set foot in. according to WhatPub,


According to WhatPub,  it was once a coaching inn, but also according to the website, the Duke’s Head shouldn’t have been open on a Monday. In addition, it was supposed to be located down a side street, rather than the main road. I’d obviously read the map incorrectly, but with the front door well and truly open, the pub was definitely welcoming customers across its threshold. 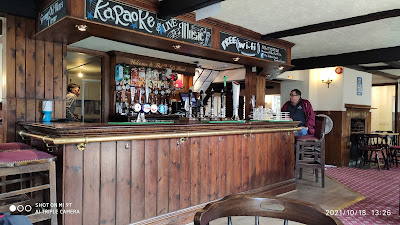 I popped inside to find one customer sat at the bar, a young barman behind it and the landlord busying himself with a number of different pub-related tasks. The bank of four hand pulls on the counter, was devoid of any clips so more in expectation I asked which cask ales were on, only to be told, “none at the moment.” They did have a good selection of lagers on tap, so after asking mine host which one he recommend, I was told without hesitation, that Heineken was the one to go for. 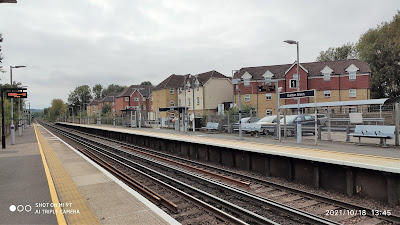 Heineken it was then, and in that particular moment in time, it really hit the spot. I didn’t have long to savour it, as I could see from my phone there was a train due in 20 minutes. The lone drinker at the bar told me there was a tarmac path leading from the adjacent recreation ground direct to Dunton Green station., so after thanking both him and the landlord, I set off across the fields to catch the train home.

Arriving back in Tonbridge, I managed to grab a “walk-in” haircut at my usual barbers, before making my way home. My knee had held up well, as on top of the four miles of trail-walking, there was an additional mile to and from the station. 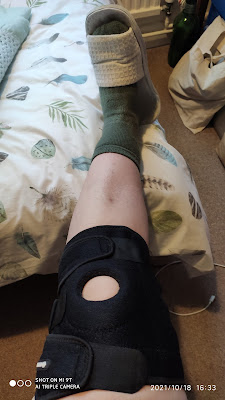 Sadly, my optimism was short lived, because on Friday, Matthew and I took a trip up to that there London place. We walked our socks off, and without realizing it, clocked up over 20,000 steps – if you include that mile each way, to the station and back. 20,000 steps equate to 10 miles, and without the benefit of a brace, my knee really felt it.

I’ve been hobbling around in discomfort, all day, and should really have strapped that support around the joint before leaving. If I’m honest, neither of us expected to do that much walking, but I won’t make that mistake a third time.

There will be a full report about our London visit, in the fullness of time, but in the meantime Monday’s short walk along the NDW, means I have now completed two thirds of the trail, with just over 40 miles to go.

I would like to finish the walk this year, but it depends on variables such as the weather, the rapidly fading hours of available daylight, plus that lower left limb of mine. If any of these reasons conspire against me, then completing the NDW will be something to look forward to next year,  come the spring.

Glad you're back on the walks, Paul. Stockport was clearly good exercise !

That Vale of Holmesdale looks great, I don't mind the M25 intervening.

I've noted a few pubs being out of cask (most recently the Chequers in Ash near Canterbury); not sure if this is deliberate or due to supply issues.

Stockport was definitely good exercise, Martin, although I might be looking at shorter walks until this knee problem sorts itself out.

The landlord at the Dukes Head, did say that there would be some cask on later. I got the impression he was having a good sort out, after a busy weekend, and was certainly keeping his young (trainee?) barman on his toes.

Of more concern than a cask shortage, is the news about a pie shortage. Something to do with the aluminium (Americans please note the additional "n"), used for the dishes/trays that help pies keep their shape, whilst being baked. (This story came from Mrs PBT's, after I told her there were no pies in the Salisbury, on Friday lunchtime). https://baileysbeerblog.blogspot.com/2021/10/that-there-london-place.html

Thanks for sharing this informative blog. Must appreciate your efforts and work. Keep sharing this kind of good stuff.
avant toronto