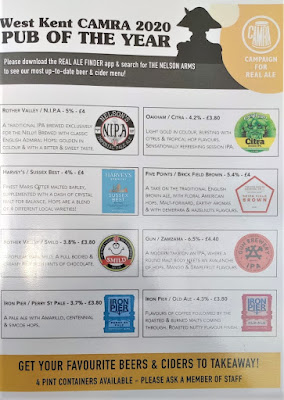 “It’s been a long time coming,” as Crosby, Stills & Nash sang at the end of the sixties. I know, as I remember the song, but as the famous quote says, “If you can remember anything about the sixties, you weren't really there!”

I was there though on 14th of April 2021, there being the labyrinth-like garden/outdoor drinking area of the Nelson Arms, and the occasion was a reunion drink with friends to celebrate the return of pubs. Not quite the full return, as for the time being, patrons have to consume and enjoy their beer in the great outdoors of a pub garden.

It actually doesn’t have to be a garden, as any suitable outdoor space will do, even a car-park, as long as the social interaction that goes with the enjoyment of beer, other alcoholic drinks, or food, doesn’t take place in an indoor environment. Something about the virus potentially spreading much in the confinement of an indoor setting. 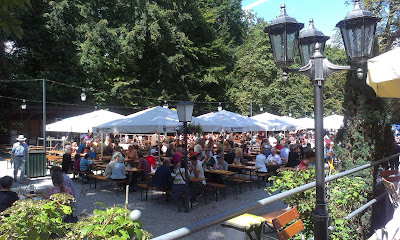 Now that spring is finally here, I really don’t mind being outside, as long as I can enjoy a beer in the company of friends and company. I’d even go further and say that is some settings I prefer being out in the fresh air. This is why Bavarian Biergartens have such appeal to me.

I digress, but the long-awaited meet-up of members of the WhatsApp Beer Socials Group – an offshoot of West Kent CAMRA was arranged some considerable time ago. In fact, the booking had been made by a friend, almost as soon as Prime Minister Johnson’s much vaunted “Roadmap out of Lockdown” plans were announced. Then, as word got around via the group, it became necessary to increase the booking to two tables. 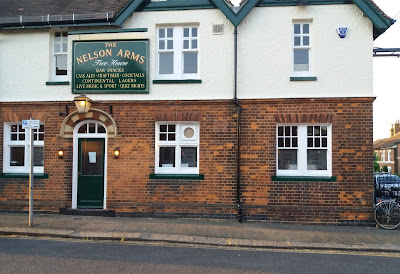 I walked down to the Nelson with one of my near neighbours. He’d been tending his front garden when I walked back from the bus stop that morning, following my journey over to Tunbridge Wells. We hadn’t seen each other for quite some time, so got chatting, as you do. It turned out he’d been invited to the meet-up as well by a mutual friend, so I agreed to call round for him on my way down to the pub. Such was his eagerness that he was waiting for me when I stepped onto his drive. 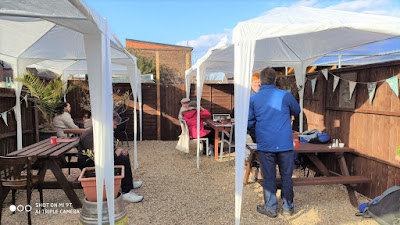 We arrived shortly after the 3pm opening time and, after checking in, found several members of the group
already there. One of our allotted tables was already full, so we sat at the adjacent one, and it wasn’t long before that too, began filling up. The Nelson’s well-trained staff were able to set up individual tabs for each of us, meaning we could drink at our own pace, and in some cases eat as well, before settling up at the end of the session. 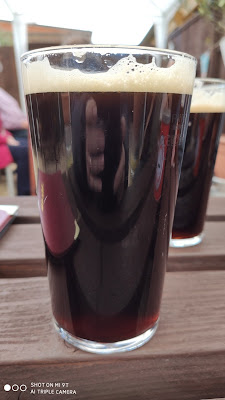 Beer was what we were there for, and cask beer at that! The pub had printed off a number of handy Beer Menus, complete with handy tasting notes. Eight beers were listed, but two of them had already finished. My first choice was a no-brainer, as it was the cask ale, I have missed the most during the long months of lock-down. It was Harvey’s Sussex Best Bitter – one of the finest, traditional bitters available, and was a beer to both savour and enjoy.

Good as the Harvey’s was, I wanted to try a few of the other beers on the menu, whilst at the same time remaining mindful that I had work in the morning and a report to present at our monthly management meeting. Pacing myself was the obvious answer, and the next beer I chose was a dark one, in the form of a 4.3% Old Ale from Iron Pier Brewery. I have enjoyed other beers in the past from this Gravesend-based brewery, and this smooth, dark, and malty ale, with its chocolate and coffee undertones, didn’t disappoint. 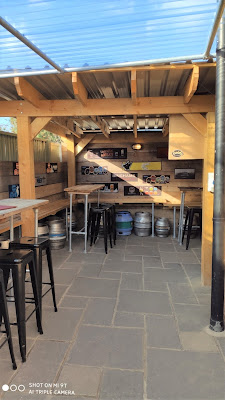 Before going any further, it’s worth describing the lengths that the Nelson's landlord Matt and his team have gone to in order to provide a sheltered and secluded outdoor area that meets government guidelines, whilst at the same time providing a convivial and safe drinking environment. The section nearest the pub is more covered in, whereas the part where we were seated is more open, with just some rather flimsy looking gazebos for shelter. Matt apparently had to sacrifice his much-prized, off-road parking area which, given the scarcity of parking spaces in the immediate vicinity, must have come hard.

Although we had two tables, several other friends and acquaintances also tuned up, but fortunately there was another vacant table available close by. It was really good seeing familiar faces and just catching up with people again, especially as most of us hadn’t seen one another for the best part of five months.

I think to a man, and a woman (branch secretary Carole was there as well), we have all had our first Covid vaccinations, but even so we had the courtesy to mask up when walking over for a chat with occupants of the other tables.

As the afternoon stretched on towards evening, temperatures inevitably began to drop. Fortunately, I’d packed an additional fleece plus a wooly hat in my small rucksack, and after the sun went down and dusk started to gather, I was mighty glad that I did. 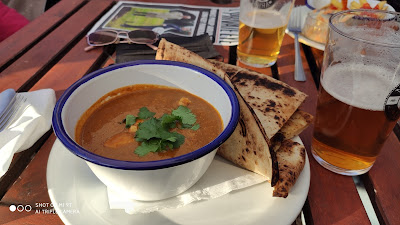 I switched back to a paler beer for my third pint, a 5% house beer called NIPA (Nelson IPA), produced for the pub by Rother Valley Brewery.  Me drinking it might come across as rather hypocritical, given my recent article about “house beers,” but it was getting a favourable reception from those who had tried it, and Rother Valley do brew some good beers.

My final beer of the evening was Brickfield Brown from Five Points Brewing. It is the brewery’s take on traditional brown ale and weighs in at 5.4%. It was on the sweet side, and somewhat stronger than a typical brown ale, but did grow on me after a while. 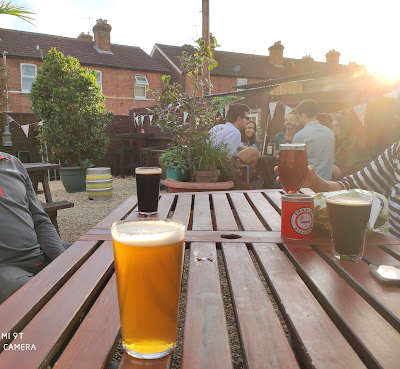 Before starting on that last beer, I treated myself to a bite to eat. The Nelson’s Ruby Murray chicken curry, which came in an enameled bowl, minus the rice, but with plenty of naan bread was both warming and satisfying, and the perfect way to end the day’s drinking and also soak up some of the beer.

By the time I left the pub, the temperature has dropped to something close on freezing, so the brisk walk home provided a chance to warm up a little. A few hardened drinkers remained, but I felt I’d had just the right amount, without feeling worse for wear the following morning.

So all in all, a good way to welcome back the return of pubs, and to catch up with old friends..

Hello Paul,
Can you explain to me why you didn't continue drinking Harvey's when you rightly said that its the finest available. Why at your age do you still feel the need to experiment & having a Ruby with it, words fail me.
I've been enjoying my pint for over 65 years I know what I want & where to get it at its best. Having said that I have visited 5 pubs in our area since the 12th but not one has come up with a half decent pint of bitter. The Hildon Manor no longer serves bitter although I'm quite happy with a San Miguel, The Plough, well you know what they are trying to pas off as beer, the Liester Arms I had to drink the larger at £5.80 a pint. Others the bitter was more like soup du jour.
I did find that The Half Moon was serving up a half decent pint of Harvey's & this is a larger drinkers pub.
I would be interested on your views of the Larkins at the moment . Is it me?

Let's just say I was caught up in the moment, rather like a kid in a sweet shop, and I do admit to being a fan of dark beers. I'm sure there will be plenty of other opportunities for a session on Lewes's finest. For example, a work colleague tells me the Harvey's Best is in top condition at the Fountain, in Cowden.

Sorry to learn of your experiences of poor beer, at the pubs you mention; especially as I had decent pints in both the Plough and the Leicester Arms, last summer. The Larkin's Trad, at the Greyhound last week, was also in first class condition.

As for the curry, it was towards the end of the evening, and I didn't fancy burger and chips - which was the other option on the menu.

Some fantastic pub pictures there Paul....lots of punters, great looking beer and a proper pub!!!
Long may it continue....

I visited the Rifleman earlier, I know you like the pubs in the countryside so thought I would report back. Best pint of Harvey's this side of lock down & very well organised from the Covid point of view. The other beer on offer was some Tonbridge thingy.

Only did the Nelson that one time just before Lockdown. Lovely pub.

Thanks for the update, Greengrass. The Rifleman is normally reliable, and is quite easy to reach on foot, if one first takes a bus to Hadlow.

I wouldn't normally indulge myself in such fashion Martin, but it was a special occasion. I think some of my work colleagues were disappointed that I seemeded fully alert and looked quite normal, the following morning.