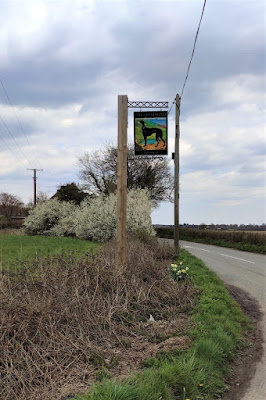 It’s Tuesday 13th April, and I’m celebrating a significant birthday – one which will allow me to enjoy free bus travel on buses up and down the length of England. I’m also entitled to claim a state pension, although I’ve deferred that for the time being.

I was at work today, as the real celebration takes place tomorrow (Weds). It’s a long-standing booking made by a friend on behalf of the Tonbridge-based members of our WhatsApp Beer Socials group. So, this eagerly awaited get together is just a coincidence, and nothing to do with my birthday. There should still be beers a plenty, although not too much, as one or two of us will be back at work the following morning.

As forecast in my previous post, I made a beeline towards the Greyhound at Charcott, for that highly anticipated first, post-lockdown pint. Today’s weather was an improvement on Monday’s, but there was still quite a chill in the air, as I made my way along the backroad from Chiddingstone Causeway. 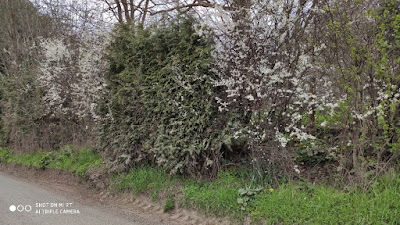 Despite the chill, many of the trees are just starting to come into leaf, and there were also some quite spectacular displays of white May flower forming a contrast against the still mainly dark colours of the woody hedgerows. 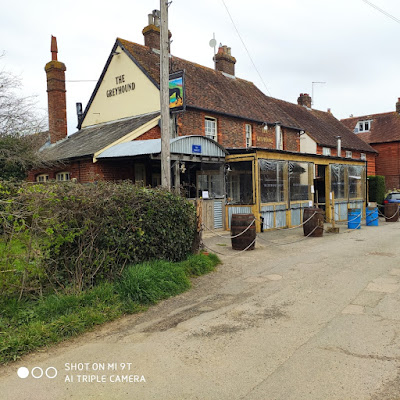 Today rather than Monday, was the Greyhound’s first day of resumed trading, and as they were planning on drinks only, until the following day, I was expecting things to be on the quiet side. The sound of laughter that I heard, coming from the side garden, as I rounded the corner towards the pub, was a welcome one indeed, and a sign that people were once again enjoying each other’s company. I waited at the entrance, as instructed, for a member of staff to “book me in.” I hadn’t made a pre-booking, and I knew that as a casual drinker there was no need, but PHE guidelines stipulate that all visits should be registered. There was a prominent sign asking visitors to scan the NHS Track & Trace QR Code, but not having or indeed wanting this particular App on my phone, I was requested to take a seat at one of the tables close to the entrance. 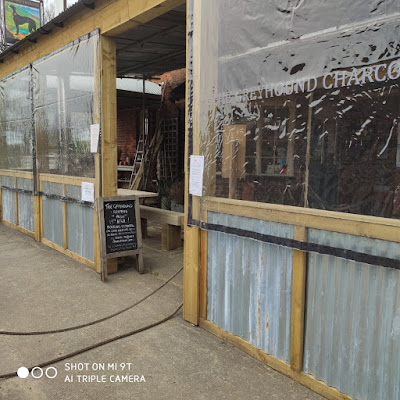 It was landlady Fran who then appeared, and after taking my name and contact details manually, asked me what I wanted to drink. She reeled off a list of cask ales, but I only caught two of them. I’d already decided to go for pub staple, Larkin’s Traditional, which was brought out to me shortly afterwards.  I asked if I could pay for it, there and then, as I needed to be back at my desk by 2pm.

Fran said she’d go and get the card machine, so I asked if cash was OK instead. With my pint coming in at £3.80, I gave her four one-pound coins, and told her to keep the change. The pint of Trad I was presented with was worth every penny, being cool, clear, and extremely well-conditioned (as Larkin’s invariably is). It also tasted superb, the perfect blend of malt and hops, packed into a beer that weighs in at just 3.4% ABV. Boy how I’d missed a pint of cask! 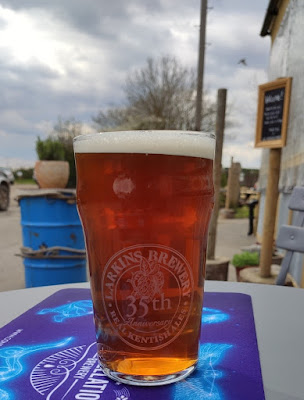 I sat there savouring my pint, watching the comings and goings at the pub. There was a party of ramblers in the side garden, and two separate couples sat in the new, partly enclosed verandah behind me. Apart from that it was fairly quiet, although the pub staff still seemed pleased with the turnout. Food service was due to resume the following day, but for now they were just pleased to be finding their feet.

After finishing my pint, I made my way back to work, shouting thank-you across the hedge to Fran, as I left. For me, that one excellent pint, enjoyed in the quiet rural surroundings of the English countryside, was the perfect way to welcome back the return of pubs. It was also a good way to be welcoming in a significant birthday!

You guys get bus passes for turning 50?

Slightly older than that Dave, but at least we still have buses. 🚌🚌

You get bus passes for turning 51 ?


NB I've left you a message on the Beer & Pubs Forum, Paul, as I've lost your e-mail address. Am visiting the in-laws this weekend.

Hi Martin. Unfortunately, I’m unable to log onto Beer & Pubs Forum whilst at work, as my book with all the various passwords we're forced to have, and are unable to remember, is at home. It’s not a site I use much anyway, especially at the moment.

I will send you my email address, by email, if that makes sense! Cheers, Paul.