The Rock at Chiddingstone Hoath 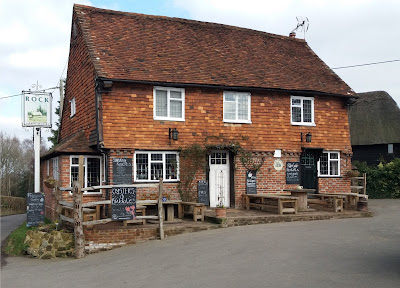 A comment on my blog, by a character who goes under the name of "Greengrass", prompted me to make a fleeting Friday lunchtime visit to one of the pubs he was referring to. Mr Greengrass (I think I know who you are, btw), asked whether the branch had selected the  Rock at Chiddingstone Hoath for next year's Good Beer Guide, rather than the classic, National Inventory-listed Queens Arms, at Cowden Pound.

If you were paying attention you'll remember I rebutted our friend from “Heartbeat”, as like the rest of West Kent CAMRA I am sworn to secrecy, but checking out these pubs still seemed a good idea. Chiddingstone Hoath (hereafter referred to as the "Hoath"), is only a short drive from Chiddingstone Causeway; the village where I work, so yesterday I decided to forsake my usual lunchtime walk and take a trip up to the Hoath. 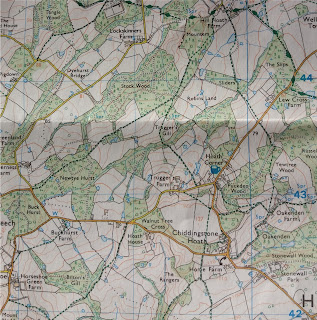 I say "up" because the Hoath is situated on high ground, to the south of the River Eden. It is a small isolated settlement, consisting of a few houses, huddled together on a sandstone plateau in the area known as the High Weald. The Rock is an old drovers inn, which has retained many original features. It is close to 500 years old, and is so named because it is close to one of several of the rocky outcrops which are a feature of this remote corner of Kent.

I have known the pub for nearly 30 years and despite its remote location have tried to visit it whenever possible. Three decades ago, the Rock belonged to Whitbread, but when that company ceased brewing, and started selling off its pubs, it became a free house. Not long after it was leased to local brewery Larkin's, who brew just down the road on the edge of Chiddingstone village. 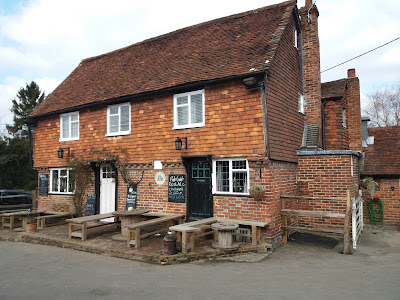 There have been several changes of owner since then; the last occurring just over a year ago. This was shortly before my last visit to the Rock, which took place in March 2017. On that occasion I had walked to the pub with a group of friends, and wrote about it here. Renovation work was going on at the time. both inside and out, but as the pub was so crowded we only really saw the exterior. A return visit was therefore long overdue.

My drive from work took around 10 minutes. The sun was shining, but it was bitterly cold out. My route took me down and across the River Eden - little more than a large stream really, and then up past Larkin's Brewery. The road then begins to climb more steeply, through woodland and then up towards the High Weald. 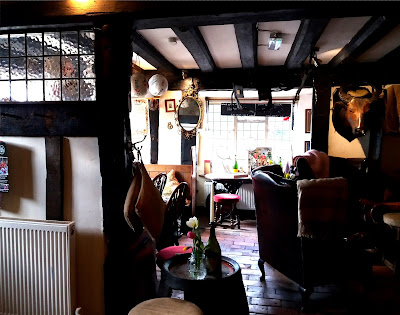 The car park was full when I arrived, so I joined those who had parked out on the road. I stopped to take a few photos, before stepping inside. Despite the number of vehicles outside, the pub was not as crowded as I thought it would be. The first thing I noticed was the bar counter had been moved back and access had also been created to one side of it. This simple act has created some much needed space, and has probably increased the capacity of the pub by an extra third.

It seems as though I can't go anywhere locally without bumping into someone I know, and yesterday in the Rock was no exception. One of the people propping up the bar was the sales and office manager from Larkin's. I wasn't surprised to see him, as he is a regular visitor to the pub, but I was puzzled to see him without his faithful canine companion. 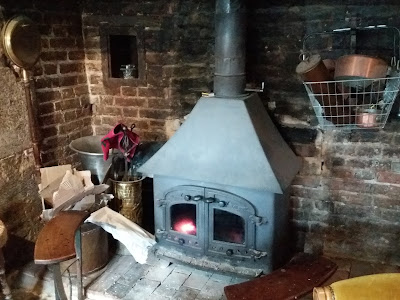 I assumed that poor Humphrey, the Labrador is no longer with us, but didn't like to ask. I was suitably castigated though for my choice of beer - Dark Star Hophead! I could have chosen Larkin's Traditional or Porter, but with a busy afternoon ahead the latter was too strong and the former is my least favourite from the Larkin's stable. Hophead then was the logical choice and it was in cracking form too, scoring 4 NBSS.

I also bumped into everyone's favourite "cider man", Bill who runs the cider bars at Tonbridge Juddians Beer Festival and Tonbridge Old Fire Station. Bill knows a good pub and yesterday was not the first time I have bumped into him on licensed premises. 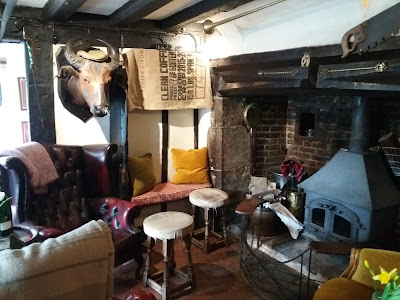 He was there with his wife, having a spot of lunch. It was him who told me about some of the other alterations, including the relocation of the gents toilets, and the blocking off of the narrow passage which led to the old ones. This has created even more space, with a nice little window alcove at the far left of the pub.

The log burner was smouldering away gently in the substantial inglenook fireplace, overlooked by the stuffed horned head used for the "Ringing the Bull" game. There was group of women sat by the window opposite; "ladies that lunch". 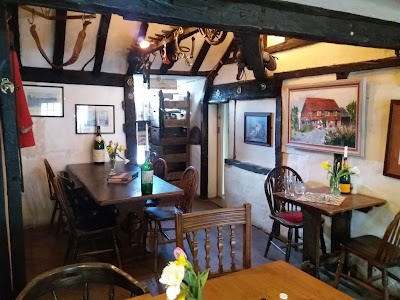 Being a rural pub the Rock obviously attracts country folk, but they are proper work-a-day country people, rather than the green Wellington brigade. The floor of worn bricks means that muddy boots, and equally muddy dogs are welcome; although the latter were strangely absent on Friday.

I mentioned earlier that the Rock is centuries old, and this is reflected in both the exterior and interior of the building. It as been lovingly cared for over the years, and the recent alterations have only enhanced this. I didn't get a chance to see the menu, but I did notice that the raised area to the right of the main bar has not only been extended but is given over, not exclusively, to dining. 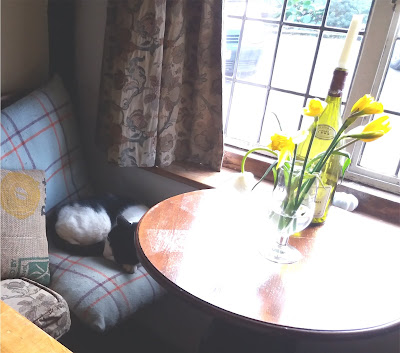 In view of the weather I also didn't get to see the garden at the rear of the pub. Whatpub describes it as a "secluded suntrap", and from memory I remember it was. I would have liked to have stayed longer, but regrettably, work called.

Before leaving I had a brief chat with the friendly girl behind the bar. I'm not sure if she was the landlady, although I have a feeling she might have been. She certainly seemed pleased at the way the things are going. One thing's for sure though, I will definitely be going back to the Rock, and next time I won't leave it for so long.
Posted by Paul Bailey at 17:46

Glad the Rock is thriving.We don't go there nearly enough.Nearly went to the Bull at Three Leg Cross on your recommendation last week. but time (mealwise ) was against us.

"On that occasion I had walked to the pub with a group of friends, and wrote about it here."

I think that was one of my first comments on your blog. :)

"Despite the number of vehicles outside, the pub was not as crowded as I thought it would be."

Would that be partly due to the renovations? More room inside now?

"overlooked by the stuffed horned head used for the "Ringing the Bull" game."

"rather than the green Wellington brigade."

And I had to look that up as well! (LOL)

"I will definitely be going back to the Rock, and next time I won't leave it for so long."

Agreed. And always good to have a specific place in mind sometimes when you go out. :)

PS - "There was group of women"

Perhaps an 'a' before group.

It certainly is good to see the Rock thriving, David. It's been a bit up and down over the years, and its isolated position hasn't always been to its advantage; but in the right hands, there's no reason why it shouldn't continue to go from strength to strength.

Well spotted, again Russ. There definitely should have been an "a" before "group". Btw, the "ladies that lunch" may, under different circumstances, have had their green Wellingtons on, but they struck me more as professional women. Either way, I shouldn't judge, as I'm likely to be completely wrong; but people watching can, on occasion, be an interesting pastime.