A rural gem with that near perfect pint 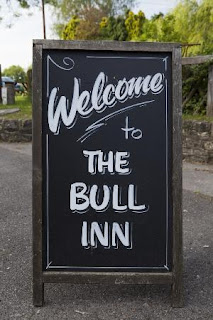 The Bull Inn at Three Leg Cross, on the outskirts of  the village of Ticehurst, is one of those pubs I’ve wanted to visited for as long as I remember, but somehow never got round to.  I can remember people enthusing about the place years ago; possibly even before I moved from Maidstone to Tonbridge over thirty years ago, but for some reason the pub completely slipped off my radar.

This is crazy as it's less than half hour’s drive from my home. However, the area around Lamberhurst, Ticehurst and Wadhurst isn't somewhere I frequent regularly; at least not since I worked in Lamberhurst, but last Sunday evening I finally made the effort to visit the Bull, and boy am I glad I did. 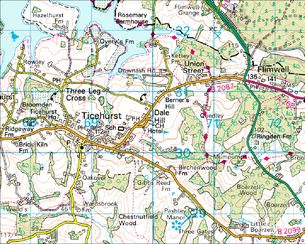 There are several shops (general store and post office, greengrocer, plus the inevitable antique dealer), a café, a car showroom and the 14th-century parish church of St Mary the Virgin. Despite these attractions I believe I've only once ever been to Ticehurst, and that was just driving through!

There are lots of places in this part of the world with the suffix “hurst” after their name. We were taught at school that the word derived from an Old English (Anglo Saxon) name for a clearing in a wood, smaller than a field or meadow and generally alongside a body of water, like a river or lake. 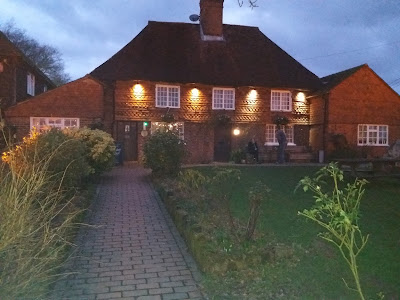 Three Leg Cross lies a mile or so to the north of Ticehurst, and seems to be little more than a small collection of houses, the odd farm plus, of course the Bull. According to Whatpub, the pub is set in four acres of ground with gardens to front and rear, but it was dusk when I arrived, so I didn't see any of this.

Instead this attractive old  tile-hung building was lit up by a number of spotlights. There are two other adjoining buildings, one on either side, which may account for there being several different levels inside. The main part of the pub though is believed to date from 1385 and has been licensed since the nineteenth century. 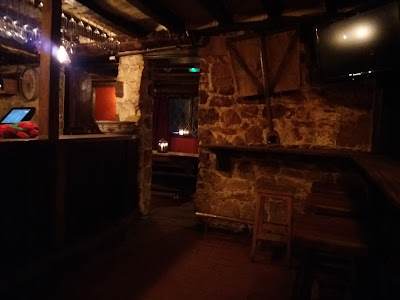 I climbed the steps from the car-park and followed the worn brick path across the lawn. There are two bars, plus what appears to be a dining area housed in the building on the  far left. I chose the left hand bar, which I imagine is the equivalent of a Saloon or Best Bar. I was greeted by a number of dogs scurrying around my feet and I also noticed a log fire, smouldering away in the substantial stone-built fireplace.

Much of the pub appears to be constructed from large ragged lumps of sandstone, tinged with traces of iron. This is a common building material in this part of the Weald, the rust-coloured staining being evidence of the iron ore, which was mined and worked in this area during the centuries before the industrial revolution. Up until Napoleonic times, the Weald was the centre of the iron industry in Britain; the trees of the Wealden Forest providing plentiful supplies of charcoal  for smelting the iron. 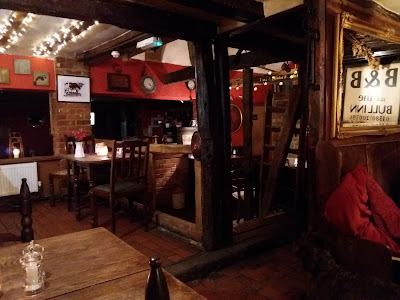 It was a step down to the serving area, where a "T"-bar set of founts, mounted on the counter greeted me. I could see across to the right hand bar, which is at a higher level, and there I spotted a bank of hand-pulls. Although I was looking at them from the rear, I spotted the Harvey's Best pump-clip and ordered myself a pint.

As hinted at in the previous post, the beer presented to me was one of the finest pints ever to cross my lips. Cool, but not chilled, and with just the right amount of condition, this pint of Sussex Best had the perfect balance between sweet-juicy malt and peppery, earthy hops. Without question it scored 4.5 NBSS, and were it not for the fact that I have never scored any beer as a perfect 5, I would have done so this time. Looking back, I wish I had now, as the chances of coming across such a sublimely delicious pint any time soon are probably few and far between. 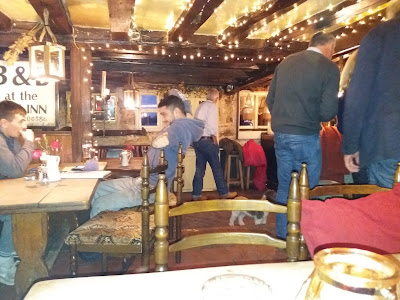 I went and sat down, close to the door with my back to the window, so I could observe the goings on. There was a lady sat warming herself, in front of the fire, who was later joined by a male companion. Just across from me were a couple of jobbing-builders, sat pouring over their estimates and accounts.  Instead of drinking the delicious Harvey's they were drinking Kronenbourg, but each to their own.

The dining area was empty, so I imagine Sunday lunch is the time for diners at the Bull. After the builders had departed, I took a few photos. I'm always a little wary of pointing the camera in the direction of people, even when it's not directly focussed on them. 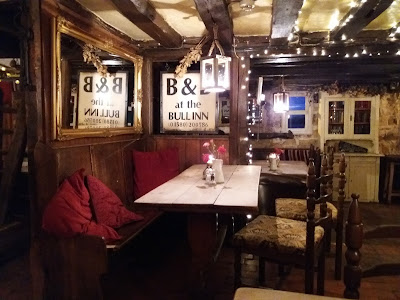 After taking several shots my curiosity got the better of me, so I grabbed my glass and walked through the small lobby and up the step into the other bar. This was "L"-shaped, with a quarry-tile floor and walls of exposed stonework. There was a group sitting on benches at either side of a long table, plus a smaller number of people stood in front of the substantial log fire. This was blazing away much fiercer than the fire in the other bar.

I nodded a greeting to the assembled company, and before sitting down at an empty table, made a point of telling the barman how fine his beer was. In contrast to the other room, this basic and down to earth bar was only dimly lit. With its low beamed ceiling and the shadows cast by the fire, I could have been looking at a scene from a couple of centuries ago, were it not for the TV in the corner which was showing the post match discussion of the Six Nations rugby game which had just finished. 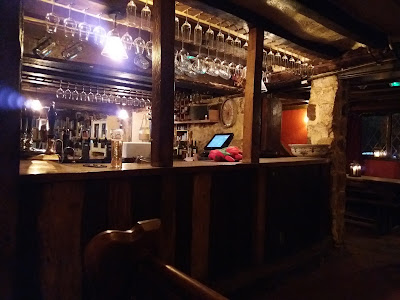 As if guessing my thoughts, the barman asked the assembled company if they'd seen enough TV, and when they answered "Yes" he brought out a suitably-sized mirror from behind the bar, ingeniously designed to hook over the TV screen. Noticing my smile of approval he smiled back and said, "No-one would ever know we'd just been watching tele".

Much as I would have liked another pint of that 4.5 NBSS Harvey's, I had a 25 minute drive home ahead of me, so reluctantly I drank up, returned my glass to the bar and departed. A customer standing nearby bade me a  friendly "goodnight"; a nice touch which further endeared me to the pub.

At work the next morning I discussed my find with a couple of  colleagues, one of whom appeared to know the Bull quite well. Apparently it is close to one of the courses where he plays golf, and he said it is always a good place to finish at. 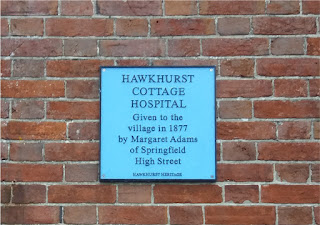 As for me, I will definitely be making a return visit, but not now following hospital visiting, as I am very pleased to report that Mrs PBT's has  been discharged from residential care and is recuperating well at home. Instead I will combine my next visit with a walk around nearby Bewl Water.

Alternatively, it may be possible to walk to Three Leg Cross walk from Stonegate railway station,  removing the need to drive there, and thereby allowing the consumption of several pints of that superb Harvey's.
Posted by Paul Bailey at 17:13

That's one visit you will remember a long time.

Cracking pub indeed! And Google says it's about an hour's walk from Stonegate station; great way to get some exercise and work up a thirst. :)

Love the mirror thing with the telly. Genius!

And great news on the missus. Can well understand not straying far from home for the time being (which gives you time to catch up on other blogs). ;)

Great piece.The pub looks a belter.
Good to see you didn't try to ingratiate yourself with the locals over a few games of euchre before flouncing off.😂

The North East Sussex CAMRA branch held a social here in December 2016.
The only available beer, Harvey's Best was in very poor condition (NBSS 1.5)
Must make a note to revisit the pub!

Yours was the only score received for this pub since December 2016.
Please visit and score more of our pubs.
Our most improved pub is The White Hart at Buxted- well worth a visit!

I've played quite a few card games in my time Prof, but Euchre isn't one of them. Many years ago some friends and I took on some of the locals at cribbage, but that was in a pub in the village where my parents lived, and where I had spent much of my teenage years.

Things were going swimmingly well until one of my friends accidentally knocked over, and smashed, an antique ceramic pint pot, belonging to one of the said locals. We made a point of sticking to the saloon bar on future visits!

Steve, I note from Whatpub, that North East Sussex CAMRA last surveyed the Bull on 25/01/2014. Unfortunately, we in West Kent CAMRA have similar trouble in visiting and scoring our own pubs, and there lies the problem with gathering data for potential Good Beer Guide entries.

I can't personally see the "Revitalisation Project" providing any extra troops on the ground, so what is the long term future for the Guide?

"I've played quite a few card games in my time Prof, but Euchre isn't one of them. "

PPT was referrring to this:

Read the paragraph before the photo of the Rising Sun Inn (or do a search for E\euchre). :)