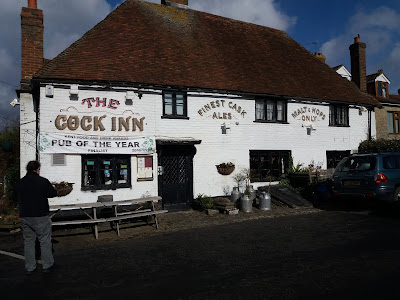 If like me, you're an avid follower of Retired Martin, as he chronicles his trips up and down the country in pursuit of yet another Good Beer Guide "tick", you'll know what a prolific blogger he is.

Several posts ago, but probably less than a fortnight in real time, Martin described his visit to Maidstone; a town I know well, having lived there for five years during the early 1980's.  Martin began his post with the line, "I have to be careful what I say about Maidstone; one of my top readers lives there (probably in the posh bit with a long name)".

This sparked my curiosity, so I asked him which part of Maidstone he considered the "posh bit", and what was its long name?  "Boughton Monchelsea and the Farleighs", was the reply, so I retorted that both places were villages in their own right, and as far as I was concerned, neither were  parts of Maidstone. I finished by saying that I might be heading over that way the following week. 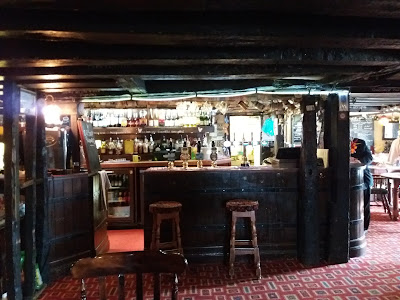 As it happened those words were no idle jest, as there was an equipment supplier to the south of Maidstone that a colleague and I had planned to visit, and the opportunity to do this came about at the beginning of the week.

We were part-exchanging a rather essential piece of laboratory equipment for a newer model, and seeing as Maidstone is only around 40 minutes drive from our works, we decided to take the part-exchange item over ourselves, and collect the new piece.

My colleague said he drive us, so we set off shortly before midday to conduct the exchange. We encountered quite a few snow showers en route, but nothing too heavy. Although we had visited this particular company before, their premises still took a bit of finding. Fortunately Google Directions on my colleague's phone helped us navigate there without too much effort. 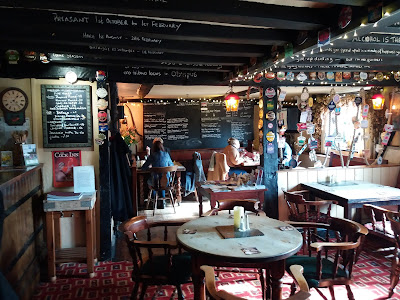 The exchange carried out and the business concluded, we set off back to work. Our outward route had taken us through West Farleigh and Boughton Monchelsea; both places Martin had mentioned in his post. I had pointed out a couple of pubs as we drove through these places, so with lunchtime looming, we decided to stop off at one.

The pub in question was the Cock Inn, at Boughton Monchelsea; an attractive former coaching inn, dating from the 16th Century, and said to have been  built to provide lodgings for pilgrims on their way to Canterbury. It must have been over 30 years since I last set foot inside the Cock; probably when I was living in Maidstone. 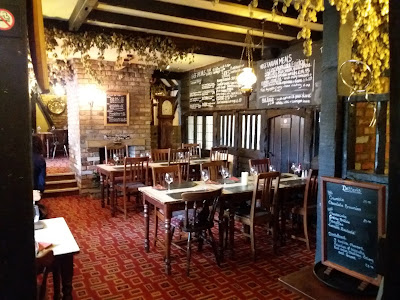 Back then the pub belonged to Whitbread-Fremlins, but I distinctly remember it being acquired by Young's. I was somewhat surprise then to see that the Cock now belongs to Shepherd Neame.  Despite the intense cold, the sun was shining when we pulled into the car park, and the pub was looking particularly good.  I managed  to take a few decent  photos of the pub's exterior, before stepping inside.

As my last visit had taken place three decades ago, there was nothing inside the Cock which looked familiar. Instead my colleague and I were confronted with a dimly lit jumble of a pub with lots of interlinked areas, and the low, oak beamed ceiling one would expect of a building of this age. The bar counter was over to the right, and I noticed there were three Shep's beers on sale; Spitfire, Whitstable Bay and Bishop's Finger (tempting, as it's rarely seen on draught). There was also a guest ale in the form of Black Sheep Best Bitter, and this was my choice (3.0 NBSS). 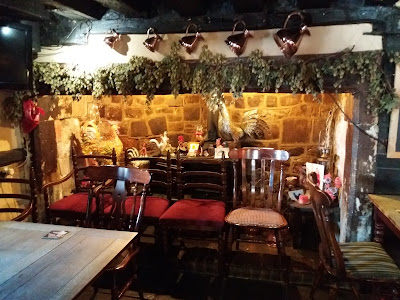 The friendly landlady suggested we warm ourselves in front of the large  inglenook fireplace. My colleague grabbed himself a steak baguette, but as my sandwiches were waiting for me back at work,  I resisted.  The sun was streaming in where we were sitting at the front of the pub, which belied the cold wintry conditions outside. There were several groups of diners,  and I noticed on my way to the toilets that there was a substantial restaurant area at the rear of the building.

I took quite a few photos, after asking the landlady's permission, of course. Even so, she asked me if I was an estate agent; as if? Looking back at some of these now, it is quite obvious that the Cock is a “foodies” pub. Not pretentious food, 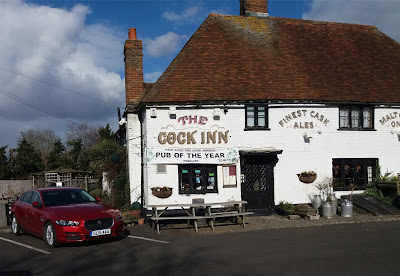 but it is still a pub with a strong emphasis on food. Drinkers though are still made welcome, and according to the write-up on Whatpub, so are walkers and dogs.

The Cock wouldn’t have been my first choice; that was the Tickled Trout (formerly the Chequers), at West Farleigh, (but only because I wanted to see what it is like now). As my colleague was doing the driving though, I let him decide, and in a strange sort of way I was pleased that we called in where we did.
Posted by Paul Bailey at 21:56

"Fortunately Google Directions on my colleague's phone helped us navigate there without too much effort."

That's a bloody godsend for the work I do out of town.

"As my colleague was doing the driving though, I let him decide, and in a strange sort of way I was pleased that we called in where we did."

Sometimes it's nice to have someone else choose and be pleasantly surprised.

And finally, apologies if my corrections is longer than my comments bit. (blush)

PS - "My colleague said he drive us,"

"I took quite few photos"

Missing 'a' before quite.

" Whatpub, so are walkers and dogs."

I think you need to cut that bit out and paste it after "according to the write-up on".

It's late Russ, and way past my bedtime. Glad you are awake though!

Corrected, along with the typo you didn't spot! The "cut and paste" bit was an error on the part of Google, as when I inserted the photo, it inadvertently moved a line of text.

Can I go to sleep now?

And yes good sir, off to bed with you! (LOL)

I'll accept your point about Boughton being it's own place ! Surprised to see Youngs seling on to Sheps. Actually the Youngs on my visit a few years back was a bit average, mainly diners, with Staplehurst having the great beer.

Boughton Monchelsea might have been slightly too far for Young's to deliver to, Martin; not that they are a brewery anymore.

As I said in the post, I was tempted by the Bishop's Finger, but a five percent beer is a little too strong for me at lunchtime, particularly when there's work involved.

Also would have preferred a look-in at the Tickled Trout at West Farleigh. A ludicrously pretentious name, but a nice pub back in the day when it was called the Chequers.