The Real Ale Guide to the Waterways 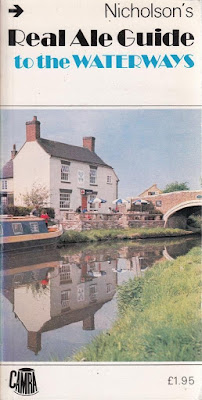 I was tidying up at the weekend and sorting through some of the books on my shelves, when I came across this publication from the mid-1970’s. Nicholson’s Real Ale Guide to the Waterways, was a joint venture between CAMRA and Robert Nicholson Publications. It set out to publicise pubs within easy walking distance of Britain’s Inland Waterway Network; basically the country's navigable rivers and canals.

The publishers claimed that the history of pubs and waterways were interlinked, and in the heyday of our navigable waterway network, pubs were the centre of a boatman’s social life, providing  places of refreshment and entertainment, but also somewhere where business could be conducted and goods exchanged.

The waterway’s guides were first produced, in the 1970s, by Robert Nicholson Publications, and were published by British Waterways, with the first edition retailing at just 75 pence.  The guides took the form of a tall thin book which had the canal running from top to bottom of each page, with the location of north at the top of the page and adjusted to suit this format. Sometimes pages had the canal "straightened" mid-page, in which case the location of north changed at the split point.

I’m not really sure what prompted CAMRA to embark on their joint venture with Nicholson Publications; especially as the Campaign was then in its infancy, but  I imagine a small group of real ale-loving canal enthusiasts were responsible. The resulting book runs to 160 pages, and as well as the diagrammatic representations of each canal, were illustrated with black and white photos, plus old bottle labels and other forms of brewery advertising. 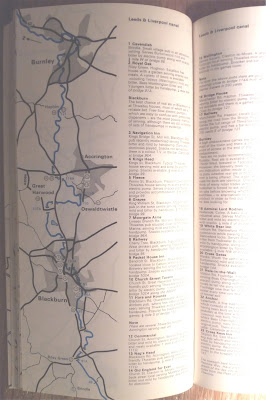 A total of 28 separate navigable rivers and canals are listed, along with numerous pubs along the way. These were either directly on the waterway in question or, more often, a short distance away. The write-ups for each entry vary, but would normally include directions, plus the real ales available. The fact that a pub served food would also be mentioned, but back in those days of standardised licensing hours, pub opening times would not be listed.

A look back through the pages of this 40 year old guide makes fascinating reading, and reveals that whilst the number of pubs serving real ale was increasing; primarily as a result of CAMRA’s growing influence and campaigning, the choice and variety of beer sold in most of the featured pubs was often pretty dire.

Big brewery beers from the likes of Allied, Bass, Courage and Whitbread, were often the order of the day; although there were obvious exceptions. Places like the Black Country, where the wares of brewers such as Bathams, Holden and Simpkiss shone out, as did towns such as Nottingham (Hardy & Hanson, Home Ales and Shipstones) and Manchester (Boddingtons, Holts, Hydes, Robinsons).

The River Thames is also worthy of special mention, as not only were the beers of London brewers, Fullers and Young’s available close to the capital, but towns like Oxford and Abingdon offered brews from Morrells and Morlands, respectively. 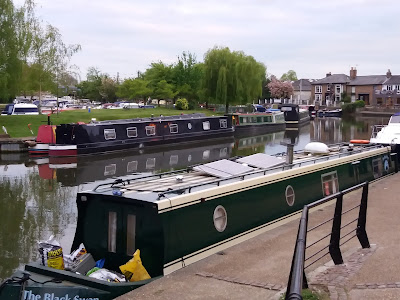 The Lancaster Canal, which is isolated from the main waterways network, gave boaters the chance to enjoy beers from Mitchell’s plus Yates & Jackson; both now sadly long-departed. I could go on, but I’m sure you get the picture. It is worth bearing in mind though, that in the main beers from  the likes of Ansells, Bass Worthington, Ind Coope, Mitchells & Butler and Greenall Whitley, dominated large swathes of the country, and were often the only choice along many stretches of canal.

Nicholson’s Guides are still going strong today, although nowadays the firm is an imprint of Harper Collins. The current guides are much better illustrated than their 1970’s counterpart, with full colour maps and photographs, plus much more detail about the canals featured, and points of interest along the way. They also list suitable pubs, but they do not go into detail about the real ales available. 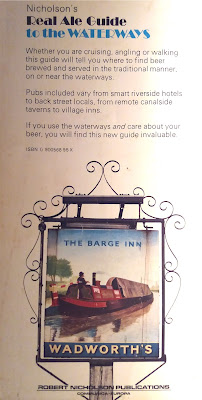 CAMRA on the other hand, never ventured onto the waterways again. I’ve a feeling the joint guide was not a commercial success, as it hung around in CAMRA’s warehouse for quite a few years afterwards. For me though, it provides a fascinating look back at the pubs of England and Wales (Scotland was not featured in the guide), at a time  when the “real ale revolution” was just starting to take off.

Finally, what persuaded me to buy a copy? Well, I did partake in a canal boat holiday with a group of friends, back in the mid-1980’s. A few years earlier, the previous Mrs Bailey and I also hitched a ride for a few days, on a boat chartered by her brother and some of his friends. This took us right through Manchester, where we were living at the time and up into the foothills of the Pennines.

Providing I can remember some of the details of these two nautical jaunts, I will write short piece about them, but three decades is quite along time ago, and I will really have to rack my brains in order to come up with something.

Footnote: The “small group of real-ale loving, canal enthusiasts”, are actually revealed at the front of the book; as I discovered after I’d hit the “publish” button. “Written and researched by Alan Hill, who would like to thank the many CAMRA members who assisted, particularly Sue Prior, Eric Spraggett and Susan Hill.” So now you know!

That's yet another thing on my half-arsed bucket list; go on a canal/pub crawl holiday. :)

I was going to ask what you thought of those trips you took years ago but I see you need to jog your memory first. In that case, no hurry, I can wait. ;)

Yes, I remember it being a standing joke at the time that there were vast quantities of unsold copies sitting in a warehouse.

Of course, in the early days there was a huge crossover in terms of both personnel and inspiration between CAMRA and the waterway and railway preservation movements.

Typo duly corrected, Russ. A canal holiday can be great fun, especially when it involves a bunch of lads, but you do need to be disciplined as well. Team work is essential, and it is not a bad idea to appoint a "skipper"; someone who is in overall charge and who commands everyone's trust and respect

We had a rather ambitious schedule, which meant early morning starts and cruising late into the evening; sometimes until well after dusk. The hire company won't be best pleased if you bring their boat back late, and you will probably lose part or even all of your deposit - especially as it will have a knock-on effect on the next group who have booked the vessel.

If I embarked on a similar trip today, I'd favour a much more leisurely approach, and definitely a less ambitious itinerary.

As for the memories, I need to locate the diary I kept at the time, otherwise the post will be rather lacking in detail, especially in relation to the pubs visited and beers drunk!

I seem to remember Mudge, that CAMRA also caught a cold with one of the early GBG's, in so much that they drastically over-estimated the potential sales and consequently went for a rather long print run. A publisher called Arrow Books spring to mind.

There probably still is some cross-over between CAMRA and various preservation societies; especially amongst some of the older members.

I was researching into finding a book I once had which I thought was Camras Good Beer Guide to the Waterways. I had no luck with searching on that, but, re-phrasing the search parameters bought me to your blog. Once I realised what the correct title was, searching was much easier.

IWe had hired a narrowboat out and I had been given this book as a present to go on the trip with. I remeber the great fun we had pootling down the canal and I woud shout out, this one is in it and we would pull in for a beer...or two...... Sometimes I think we only did half a mile in a day.

I am now on my second narrowboat, having sourced a copy of this book, I intend to visit those pubs, still around, to see how they are doing some 40 years on, what beers they have, certainly I expect a lot of Breweries have gone, like Youngs. I would like to revamp the book into a modern guide, given the popularity given to canal boating by such stalwarts like Timothy 'Crasher' West and the like, it may be there would be a niche in the market for such an epitome, that came out before its time.

My Grandad wrote this book, and it's lovely to see people still reading and enjoying it. Even though I'm sure it is much out of date :)

"CAMRA on the other hand, never ventured onto the waterways again" It did indeed venture into waterways again The Camra guide The Best Waterside Pubs in England And Wales by Chris Rowland and John Simpson was published in 1992