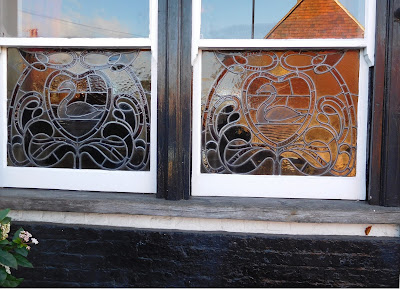 Whilst it’s still fresh in my mind, I might as well launch straight into part two of my Lewes article. Not only that, but I am out tomorrow evening, attending a business meeting of the my local CAMRA branch.

We had just left the Swan Inn, when I left off last time, and were heading back towards the centre of town. We were on flat ground, at the bottom of the defensive outcrop of the Downs, on which Lewes is constructed,  passing the town’s football ground and the station on our way. The history buffs amongst you might be interested to learn that we also passed Anne of Cleve’s House, shortly after leaving the Swan. 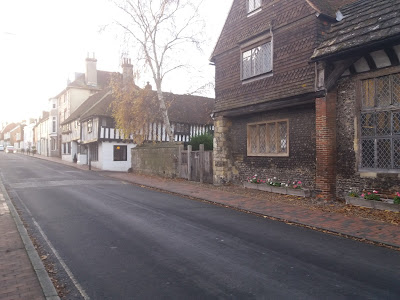 Anne of Cleve’s, of course, was Henry VIII’s  fourth wife; the one he infamously described as looking like a “Flanders’s mare”. The marriage was never consummated and Henry granted Anne an annulment. The house in Lewes formed part of the settlement, although Anne never visited the property, let alone lived there.

I mentioned in the first part of this narrative that we had a choice of two pubs; the King’s Head or the Lansdown Arms. The former was ruled out, following a hint earlier from Jo,  that the beers were on the pricey side, so we continued on to the Lansdown. I had been in the King’s Head before, when my companion and I spent the night in Lewes, whilst walking the South Downs Way. I remember it as a very pleasant pub serving good food and, from what I could see as we walked past, little had changed. However, given the time constraints I was happy to give it a miss and try the Lansdown instead. 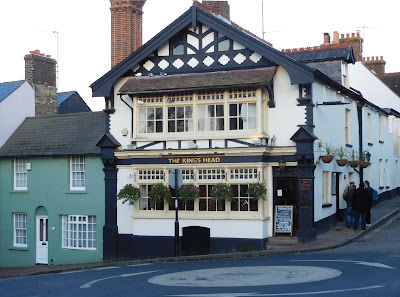 The Lansdown Arms is an attractive pub, sited on a prominent corner location, close to Lewes station. The large sign out side describes it as “An atmospheric drinking den to whet your palate and tend to your needs”. It then goes on to say, in bigger and bolder letters, “The heart of an incredible community”.

I certainly got the feeling the Lansdown was a proper community pub, with its quirky interior, and multi-level drinking areas. There were two beers from Long Man on tap, along with Harvey’s Old. I opted for the Long Man American Pale Ale. This generously hopped, pale ale, weighs in at 4.8% ABV, and is packed with rich citrus and other fruit flavours. It is well worth seeking out, and was in good form (3.5 NBSS), on Saturday afternoon, . 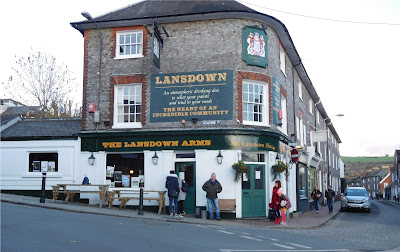 I had been tempted to have a pint of Harvey’s Old instead, but I knew I'd be able the drink that at the pub we were planning on stopping at on the way home. Little did I know! We commandeered a couple of the long, scrubbed wooden tables next to the window; close enough for those who wanted to watch Scotland thrashing the Aussies at rugby (well worth seeing I must say!), but not so close that conversation was stifled.

I could probably have squeezed another half in, but with a half hour bus journey ahead, and no opportunity to expel excess fluid, I wisely decided to just have the one. We departed in plenty of time to catch the 4.36 pm bus, as previously planned, but when we reached the stop, we saw a message flashing up on the digital information board, telling would-be passengers that there was currently no service to either Crowborough or Tunbridge Wells, as the A26 was closed following a serious accident. 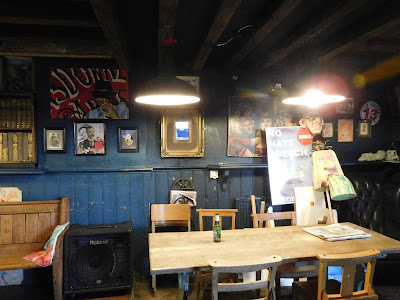 Talk about the best-laid plans, but we  nevertheless waited for the bus and asked the driver what the score was. He advised us to board, and stay on as far as Uckfield. He would then radio in to control to find out what was happening. This suited Matt and I as we knew that if it came to it, we could get a train home from Uckfield, even though it would mean a 25 minute walk in order to change stations at Edenbridge.

This was not much help for our Maidstone companions, but we boarded as suggested and waited for further information once we arrived in Uckfield. After speaking to his controller, the driver advised us to board the London bound train and alight at Crowborough. Our tickets would be valid and there would be buses running back to Tunbridge Wells. 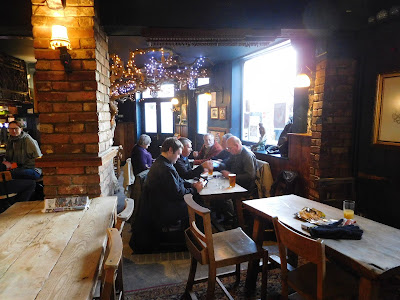 Matt and I decided to stick with our friends, but when we left the warmth of the train at Crowborough, there was no sign of any buses, and a phone call to the bus company also drew a blank.  Fortunately, the person nominally in charge of the trip managed to contact a local taxi company who sent an eight-seat mini-bus to take us back to Tunbridge Wells.

Working out at just £3.00 a head, this was an absolute bargain, and 20 minutes later we were dropped off in Tunbridge Wells, as the station. The Maidstone contingent had a bus due in around 10 minutes, and although Matt and I had just missed a train, there was another due in 30 minutes plus a nice warm waiting room to take refuge in beforehand.

So what about our intended pub-stop on the way back? This was supposed to be the Pig & Butcher; an imposing Victorian pub owned by Harvey’s Brewery in the village of Five Ash Down, a few miles to the north of Uckfield. I was particularly looking forward to stopping there, as I had missed out seven years ago, at the end of a lengthy walk along the Wealdway long-distance footpath. 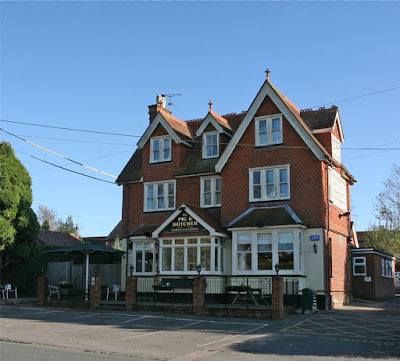 After hiking across Ashdown Forest on a baking hot June day, my friend Eric and I found ourselves at Five Ash Down. We knew we could get a bus back to Tunbridge Wells from there, but the sight of the Pig & Butcher, opposite the bus stop was also rather tempting. We were just about to cross the road, when we saw a double-deck bus approaching in the distance.

With no timetable, and no Smart-Phone with internet connection back then, we made a split second decision to flag the bus down. We were both foot sore and weary after walking for four days, from the River Thames at Gravesend, and the prospect of not knowing when the next bus might be due, plus the dangers of dallying too long in the pub, unfortunately meant giving the Pig & Butcher a miss.

We made the right decision, but ever since I’d wanted to call in and give the pub a try, and missing out again was both frustrating and annoying. The bulk of the trip had been fine though, and proved a most enjoyable way to spend a cold November Saturday. It was especially good to visit a few of Lewes’s lesser-known pubs, rather than the usual suspects of the Brewer’s Arms, the Lewes Arms and the Gardener’s.

I do plan a return visit to the town in the not too distant future; one which will include a stopover at the Pig and Butcher.

I enjoyed your travel drama, Paul, even if you didn't. Ended well. Anyway.

I wasn't overly concerned about the travel problems Martin, as the cross-country rail route was always an option for getting home. I was however, rather peeved at missing out on the Pig & Butcher; having missed it previously.

Lewes certainly is a gem of a town, and no matter how many times I visit, I always find something new.

It worked out all right in the end (and not a bad bargain for the mini-bus). Plus, on the bright side, you get to try it again some day and this time with luck take in the King's Head as well as the Pig & Butcher. :)

Silly question I know but I suppose there was no connector bus you could have taken from Uckfield via the B2188? Oh and not that I'd have thought of it either but could you check the bus line info on your phone before you leave the pub (though you got on and got part way anyway so I guess that point's moot).

PS - "but I knew I'd be able the drink that at the pub we were planning on stopping at on the way home."

I believe that should be "able to drink"

Russ, public transport in the UK, runs fairly infrequently in rural areas, especially in the evening. This particularly applies to buses. This is why trains are often a better option.

The route between Tunbridge Wells and Uckfield skirts Ashdown Forest, which is one of the highest and most isolated areas in the South East. There are no alternative services, and given that Brighton & Hove Buses operate double-deckers over this route, no alternative roads they could take either, (over-hanging trees, winding narrow roads etc).

Typo noted, I will correct it later, thanks.

Thanks for the update. Apologies if I seemed to be complaining. Rural areas here are awful for public transport. I didn't realize they were almost as bad over there.

The one big problem with going by bus on a pub crawl in rural areas is the bladder.
I'm breaking out in a cold sweat even now just thinking about that time I was desperate for a piss and the Noddy bus I was on stopped at every stop and all the passengers getting on were the elderly and infirm with poor eyesight who couldn't find the correct change.
I am involuntarily crossing my legs even as I write this !

I agree Syd, this is a problem, especially after several pints have been consumed. I ddin't want a pee when we left the last pub, but by the time the bus arrived I definitely did.

We sat upstairs and every jolt and lurch of the bus was sufficient to remind my bladder that it needed emptying. I was relieved, in more ways than one, when we reached Uckfield, and fortunately there was a toilet at the bus station. It was a close run thing though!

Ugh, I can completely relate to that. Didn't realize inter city (village) buses had no facilities. 😱

That would definitely put a "damper" on things. 😏

Very few service buses in the UK, have "facilities", Russ. The distances between towns and villages on most routes, aren’t that great; hence no need for an onboard toilet.

Long distance coaches, such as those travelling between cities, are another matter; although they weren’t always so well equipped. As an impoverished student, back in the mid-70’s I regularly took the coach between London and Manchester; a journey of around 3 hours. I couldn’t afford the train, so it was a case of minimising one’s fluid intake, prior to setting off, although there would normally be a stop-off at a motorway station, roughly halfway.