Lewes by bus - Part One 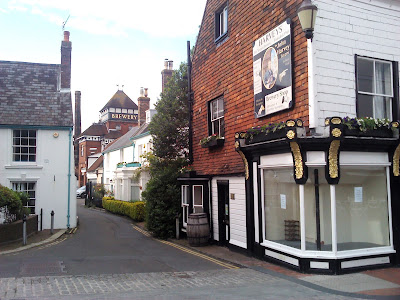 Lewes is surprisingly easy for me to reach by public transport, so I’m rather baffled that I don’t travel there more often. The number 29 service bus, operated by Brighton & Hove Buses runs at half-hourly service between Brighton and Tunbridge Wells, and whilst I still need to get to the latter, I can do this easily by either bus or train.

The fare is also remarkably cheap at £6.50 for a day return or, as my son and I found out just £5.00 each for a family day pass. We travelled down to Lewes with a select group of six members from Maidstone CAMRA, who we met up with in Tunbridge Wells. 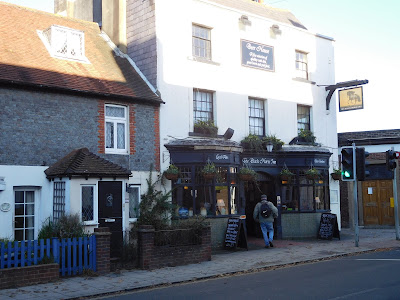 Sitting on the upper floor of the comfortable double-deckers which B&H Buses use for this service, gives some splendid views of the surrounding countryside, and on a day like yesterday with not a cloud in the sky, allowed us to see right across to the bulk of the South Downs, looming way ahead in the distance. The return journey was not so good though, but I’ll cover that later.

We arrived in East Sussex’s county-town shortly after 1pm, but chose not to get off at the bus station. Instead we stayed on the bus as it journeyed up School Hill, into the heart of this ancient town, and finally alighted close to the Black Horse pub; our first port of call. 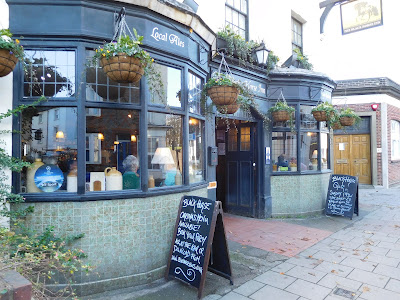 Now I’ve not got particularly fond memories of this pub, having used it as over-night accommodation whilst walking the South Downs Way, nine years ago. Back then it was a rather rough and ready, former Beard’s pub (an old Lewes brewery, which hung onto its pubs long after it ceased brewing), which had ended up in the hands of Greene King, after they bought the Beard’s estate.

The decision of my companion and I to stay at the Black Horse was due to our walk coinciding with an event at nearby Glyndebourne. This had left accommodation in short supply, so let’s just say it provided a bed for the night, plus breakfast the following morning, and leave it that.

Much can happen in nine years, and I’m pleased to report that today the Black Horse is an excellent and thriving free-house offering a good range of cask ales, from several different brewers. With two log fires on the go, it offered just the warm and comforting welcome we’d been looking forward to after our journey. 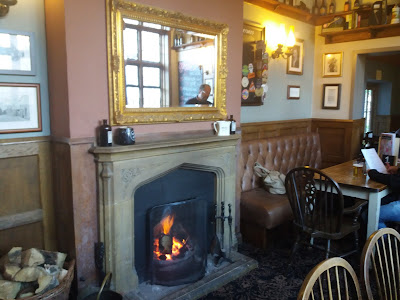 There was quite a range of ales on sale, probably too much for some, but the Burning Sky Plateau which Matt and I had was in excellent condition (3.5 NBSS). We found a couple of tables at the far end of the right hand area of the bar. I suspect this was once a separate bar, back in the day, but with a nice log fire roaring away in the grate I felt nicely at home and fully expecting to be staying a while.

At this stage I should point out we were joined by a lady called Jo, and her dog. Jo was known to my Maidstone friends as she had once run a pub in the town. It was here I think that the confusion started, as Jo was aware of our visit and had let the pub know. They were obviously expecting us to eat, and I must admit so was I. One of the barmaids said as much, because the tables had been reserved for us. 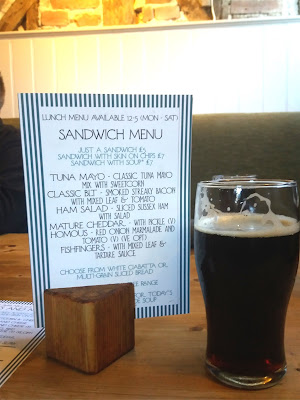 It was slightly embarrassing then when my companions decided there was nothing on the menu which took their fancy. It looked fine to me; plain and simple pub grub, and reasonably priced at that, but the majority decision was to eat at the next pub, and that nearly turned out to be a mistake.

A couple of my friends tried another beer – Crème Brule from Dark Star, but I thought it best to pace myself especially as people were donning coats, ready to leave. I felt a slight embarrassment as we left, not that the decision to eat elsewhere was mine. I would still have like to have stayed for another beer though, and something to eat.

Our newly-joined companion, plus hound, guided us to the next pub; the Swan Inn situated in the Southover district of Lewes. For those not familiar with the town, it is built on a hill, over-looking the River Ouse. A partially ruined castle is sited at the highest point of the town and, when time allows, it is well worth buying a ticket and climbing to the top of the keep in order to appreciate the spectacular view over the town and across to the South Downs on the other side of the valley. 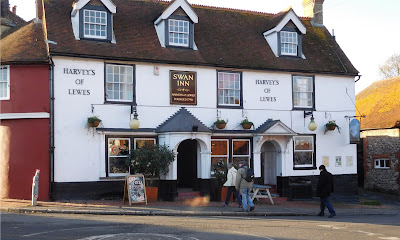 Time wasn’t on our side though, so we followed our guide through a maze of back alleys and pathways, known locally as "twittens", past the modernist, and totally out of place, bulk of County Hall, down the side of the hill to the quiet streets of Southover. There we said goodbye to Jo, who was due to do her regular stint behind the bar at Lewes Football Ground, a short distance away.

We found our way to the Swan, a delightful, old-fashioned two-bar local, owned by Harvey’s of Lewes. On entering I began to question my companion’s wisdom in not eating at the Black Horse, as this rather cramped Victorian gem was packed. We queued at the bar to order our drinks, and with four Harvey’s beers on offer, were spoilt for choice. 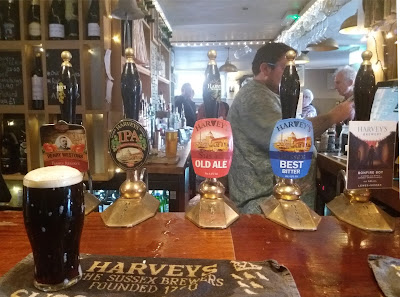 The fact that the Swan had the dark and delicious XXXX Old Ale on tap, made the decision a no-brainer for me, and what’s more the beer was in fine form, coming out again at 3.5 NBSS. It was also my first drop of Old this season.

We made our way through to the other bar, which was slightly more basic and must once have been the Public Bar. Fortunately a party of people were just leaving, so we were able to claim their vacated table. The menu was written on a board in the other bar, but fortunately I’d captured it on my phone. It looked remarkably similar to the one at the Black Horse, but slightly pricier, so was there karma at work here? 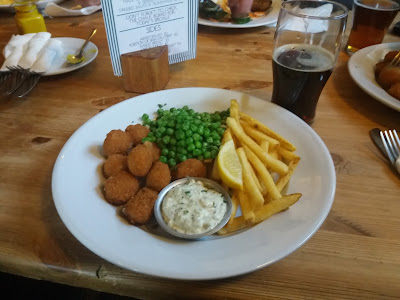 The lad and I opted for that old pub favourite, scampi, chips and peas. Others went for the ham, eggs and chips. The food arrived quick; it was nice and hot and the portions were plentiful, so all in all things worked out right in the end. I had time to grab myself a quick half of Bonfire Boy; Harvey’s strong (5.9% ABV), darkish seasonal special for the month of November. It was full bodied, warming and packed full of flavour; just the ting in fact for a cold winter afternoon. I scored it at 3.0 NBSS. 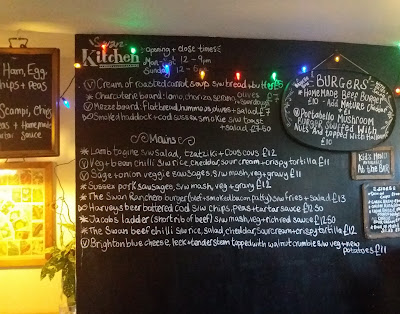 I highly recommend the Swan; it attracts a good crowd with a food and drink offering of a high standard. The landlord has a record deck behind the bar, and was playing a selection of  old acoustic blues numbers; not quite my cup of tea, especially as they were a bit mournful, but a welcome change from the usual piped “muzak”.  That over-worked term “atmospheric” best describes the Swan, and  as with the previous pub, I was reluctant to leave.

We then had two pubs to choose from, prior to our planned 4.36 pm departure. As there is still a fair bit of narrative to come, including a section on the trouble we had getting back to Tunbridge Wells, I will take a break here and continue in a subsequent post.

I'd have gone for food in that first pub, too. Soup and sandwich always a good option.

Lewes manages to combine an upmarket civility with Brighton bohemia.

"Lewes manages to combine an upmarket civility with Brighton bohemia".

In a nutshell yes, and with an abundance of independent shops, historic buildings and characterful pubs, what’s not to like?

A 45 minute drive says Google Maps. When the weather was good I'd be looking at a day trip too if I lived there.

And I understand the minor annoyance of having to leave before you're ready. Sadly in a group that size, needs want and all that. But yep, I'd have happily stayed for another pint near the fire. :)

Still, it seems the Swan was a good place to have a pint as well. Lucky bugger.

An earlier start would have been preferable; ideally an hour earlier. As it was we didn’t arrive in Lewes until after 1pm.

I wasn’t my trip though, so I just went with the flow, and it should be remembered that the group from Maidstone had already been travelling for the best part of an hour, just to get to Tunbridge Wells.

Which explains why you were such a gentleman in not making a fuss. 😎