To Dover and the Lanes 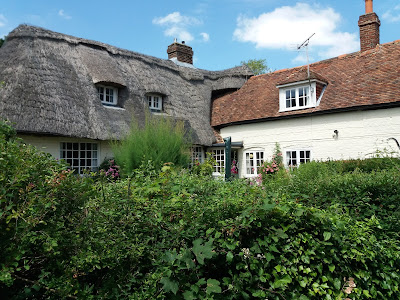 Continuing the narrative from last Saturday’s walk along the North Down’s Way, we  were reluctant to leave our comfortable vantage point at the Wrong Turn, but with a lengthy walk ahead of us we decided we ought to press on. Our route took us through the tiny village of  Barfrestone, with its picturesque thatched cottages and 12th  Century Church of  Saint Nicholas Church; the second oldest Norman church in the UK, before heading out into the open countryside.

We then passed through the much larger village of Eythorne which is only about a mile from the long closed Tilmanstone Colliery; one of the four main pits of the former Kent coalfield. Besides the church and the village shop, Eythorne still has a pub - the Crown, although the former White Horse is now a bed-and-breakfast establishment.

On our way out of the village, we passed one of the restored stations of the East Kent Railway (EKR). This was a light railway, constructed between 1911 and 1917, in order to serve the Kent Coalfield. We had noticed another former station at Shepherdswell, close to where the EKR once connected with the mainline railway. Today, the EKR is a heritage railway, operated by volunteers.

After leaving Eythorne our walk took us through an area of woodland, before leading us up through fields of wheat, onto a ridge. We then passed into parkland characterised by some of the largest sweet chestnut trees that any of us had ever seen. The park forms the surroundings to Waldershare House, an impressive and attractive Georgian mansion which dates from 1712.  Looking at some of these magnificent trees it was impossible not to admire the vision of the men who planned and set out these sweeping landscapes two centuries ago, even though they knew they would not come to maturity in their lifetime, or even their grandchildren’s lifetime!

We then made our way down from the ridge and out of the landscaped parkland, passing through the churchyard of All Saints, Waldershare. The church is no longer used for regular worship, and is in the care of the Churches Conservation Trust, but I imagine that at one time, it would have been used by estate workers from the big-house. As is often the case with churchyards, there was a magnificent yew tree growing there, quite close to the church. Because of its massive girth, one of my companions reckoned the tree could be over a thousand years old!

After crossing the busy A256 by mean of a road bridge, we passed through the small village of Ashley; a settlement which seemed devoid of anything apart from bungalows. We then turned off down a grassy track and headed off in a southerly direction with the aim of reaching Dover some time between 6.30 and 7pm.

This is where the walk became more of a route-march, and where it gradually became lass and less enjoyable. The countryside was pleasant enough; alternating between open fields and wooded areas, but we knew that fairly soon we would come to the main A2 trunk road, where the NDW makes a lengthy diversion in order to find a suitable crossing point.

This was also where our party became separated, as the two stronger walkers were striding on ahead, leaving me and my friend Don, further and further behind. Now I’m sure Don could have kept up with the other two, but he very kindly hung back in order to keep me company, and this was just as well as I was running out of  steam.

We walked the final three mile stretch into Dover at a much reduced pace, but fortunately most of the route was now along paved roads and downhill, eventually becoming more and more built up.

The agreed plan had been to make for the Thirsty Scarecrow micro-pub, at the top end of the High Street, before continuing on to another micro in the form of  The Lanes. Don and I however, decided to head straight for the latter, as we knew it was only five minutes walk away from Dover Priory station and our train home. We sent a text to the advance party telling them of our intentions, and pressed on through a rather nice residential area of the town.

By this time my knees and the tops of my thighs were telling me to stop and rest, but with the town centre in sight we carried on, eventually reaching The Lanes just before 7pm. This was my first visit to this excellent micro-pub, situated on a street corner, on a side road, just off the pedestrianised town centre. It is carpeted throughout and comfortably furnished with a mix of high tables and stools, plus settees and low tables. 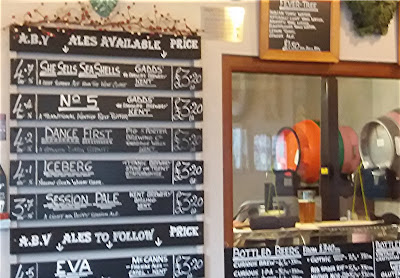 The pub is named after its owners Keith and Debbie Lane, who opened the venue in December 2014. The couple provide a warm and friendly welcome to all who step inside, and I was certainly glad of a place to sit down and rest my weary feet and enjoy a beer or two. The pub offers up to five cask ales from microbreweries (two from Kent) along with around ten ciders. All are served on gravity dispense from a temperature controlled cellar room complete with its own viewing window in the bar.

The Lanes makes a feature of stocking all that is good with Kentish ales, ciders, wines and mead, along with soft drinks from local producers. The pub also stocks a range of speciality gins. The Lanes was voted Pub of the Year 2017, by the local CAMRA Branch (Dover, Deal & Sandwich), and has also gone on to win East Kent Pub of the Year as well. It will now go head to head against the winner for West Kent – the Flowerpot in Maidstone.

Landlady Debbie, guided us to one of the comfortable sofas, although I opted for the adjacent, slightly higher arm chair. A beer was definitely in order, so Don and both I went for the Gadd’s No. 5, from Ramsgate Brewery. Not long after, the other two members of our party arrived, having enjoyed a couple of ciders at the Thirsty Scarecrow, on the way into town. The Scarecrow is unusual, certainly in this part of the country, because it specialises in cider, rather than beer. Up to 20 ciders are stocked, with just one or two casks of ale to please beer lovers.

We stayed at The Lanes for a couple of hours, but the strange thing was none of us drank that much. I think we all pretty exhausted, and in my case suffering the effects of too much sun. This was despite wearing a sun hat and slapping on plenty of sunscreen.

I remained with the Gadd’s for my second pint, this time the summer-themed She Sells Sea Shells - a lovely pale and well-hopped beer, which shows off all that is good about a Kentish summer, spent by the sea. I removed my boots (but not my socks!),  allowing the air to get to my feet. I felt much better by the time we left, and had no trouble in walking back to the station, or indeed walking the mile or so back to my house, once we arrived back in Tonbridge.

So all in all, a good day’s walking in a part of Kent I am not at all familiar with, combined with some excellent beers in two really good micro-pubs. The fact that one was rural and virtually in the middle of nowhere, whilst the other could not have been more urban in its location, proved once again that it’s the pub and the people who are important, and not its actual location; although the latter obviously plays a part.

As for "White Cliffs Country", this is the name given by the local tourist authority for the area which encompasses Dover, Deal and Sandwich. It is a unique place where coast meets country, beauty meets history and England meets the Continent.

We obviously, only scratched the surface of this corner of East Kent, and it is an area which is definitely worth a visit and spending more time in.