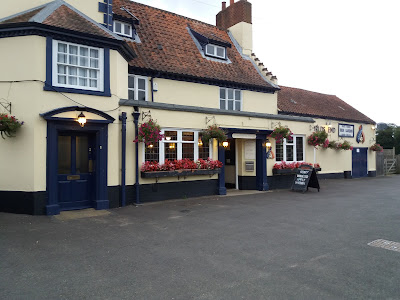 It’s nice to get away sometimes, especially when there’s been a lot going on both the work and domestic fronts, so a long-overdue trip up to Norfolk to see dad seemed a good idea. After selecting a free weekend, I booked Friday off; the idea being to spend two nights in the county and to make a decent break of it. Unfortunately my plans for an early departure were delayed somewhat as we ended up having to have a new washing machine installed, and that Friday was the most suitable day.

As it happened the “Know-How” team from Currys arrived reasonably early, and seeing as we’d ordered a built-in “integrated” machine to replace the one which had died, it was well worth paying for it to be installed by a professional team, rather than me crawling on my hands and knees trying to connect the various pipes. 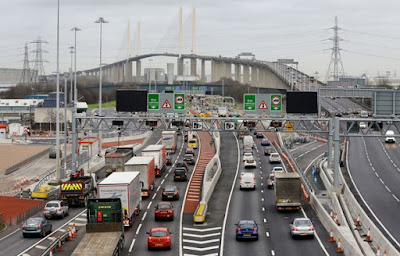 After some clearing up and putting a few things away, it was 11am by the time I left; although it took me another 10 minutes to programme the Sat-Nav! Despite my reasonably early start, I still hit six miles of queuing traffic on the approach to the Dartford Crossing. This seems a regular occurrence, as I got caught in the same place on my previous trip to Norfolk, and on the way back on Sunday, I noticed the same lengthy, northbound queues.

Once through the tunnel, the traffic thinned out (where does it all go?), and I made good progress, but obviously not sufficient to make up for the 40 minute delay. After turning off onto the A12 (not my favourite road) just south of Ipswich, I made my way to the riverside settlement of Pin Mill, and the famous Butt & Oyster Inn; a pub I had wanted to visit for a long time, but had never quite managed to. It was here that the Sat-Nav really came into its own. 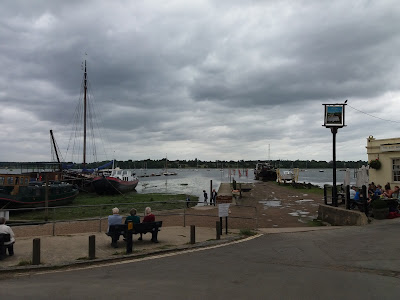 I am writing a separate post about this famous, National Inventory - listed pub, so I won’t elaborate further, but I was pleasantly surprised that my visit there only involved a deviation of 15-20 minutes both ways. I took the A14, towards Newmarket, before turning off onto the A140, just before Stowmarket.

For those unfamiliar with the A140, it is an old Roman road, so it is fairly straight, although most of it though is single carriageway, with speed restrictions along much of its length. This was always my least favourite route up to Norfolk, but needs must and all that. During the course of my journey I noticed there were a large number of pubs lining the road; some in quite isolated locations. The term “roadhouse” springs to mind, but most of these pubs looked much older than the “between the wars” establishments which sprang up to cater for the growing motoring trade. 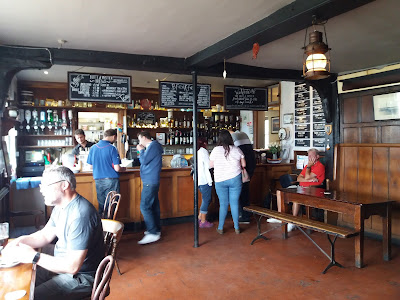 I imagine that most were old coaching inns, which acted as staging posts along this ancient route towards Norwich. There are some quite famous old inns along this road, although not all have survived as pubs. Several appear to have been converted into upmarket gastro-pubs, or even restaurants. For example, the Yaxley Bull is now an up-market restaurant called the Aurberge, the Countryman was once the Bird in Hand and the former Dun Cow, is now the strangely-named Sugar Beet Eating House.

Fortunately traditional pubs, such as the White Horse, the Old Ram and the Walnut Tree still survive, and the Magpie at Stonham Parva, which had a gantry sign spanning the carriageway, has re-opened following a lengthy period of closure. I had noticed many of these establishments on past journeys, and in an effort not to doze off, I started thinking it would be interesting to do a pub crawl along the A140, stopping off at whichever of these old pubs took my fancy. Obviously I would need the services of a tame, non-drinking driver, but if I lived locally a min-bus trip with a group of friends, would be an idea worthy of serious exploration. 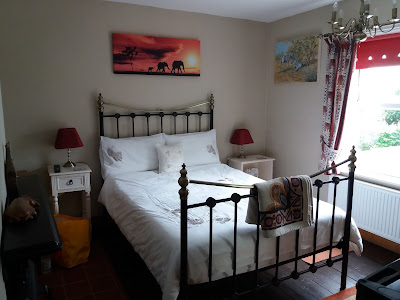 I arrived at my pre-booked bed & breakfast establishment shortly before 5pm; having stopped off at a Co-Op supermarket to stock up on a few items such as bottled water – for me and chocolate biscuits for dad. I’d had trouble finding somewhere at a reasonable price, that wasn’t booked up, but with the school summer holidays in full swing, this was perhaps not surprising. My chosen abode for the weekend (I was staying for two nights), was some distance from the Dereham area, where dad’s care home is situated and my sister also lives.

Fortunately I found the delightfully named Meadow Farm Cottage, a cosy and comfortable establishment just outside the village of Mulbarton. I checked into my room, with its view out across the garden and hen coup to the fields beyond, unpacked and then decided it was time to do some exploring. 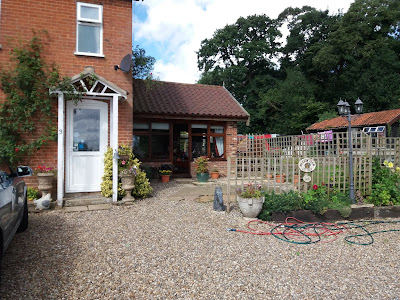 I knew there was a large Adnam’s pub on the other side of the village, as I had already checked out the locality on Google Maps. The landlady had told me the pub was quite walkable, and that she and her husband quite often went there on foot. It should take around 45 minutes, so I decided to give it a go, and set off armed with a torch, a pre-downloaded route map on my phone and a shower-proof coat. The torch was important for walking back in the dark; not some much to see where I was walking, but to make sure any on-coming cars were aware of me. The coat was essential, because rain was forecast for later.

I found the pub without difficulty, even though it seemed further than I thought. The walk afforded me the chance of seeing Mulbarton close-up, and it reminded me of Swanton Morley; the village where my parents had retired to when they first moved up to Norfolk. Many of the bungalows were constructed in a similar style, and were obviously of the same era (late 70’s – early 80’). More than a few had that tired look about them, which characterised my parents’ bungalow in the later years. I also noticed that several were in the process of being renovated or even extended. 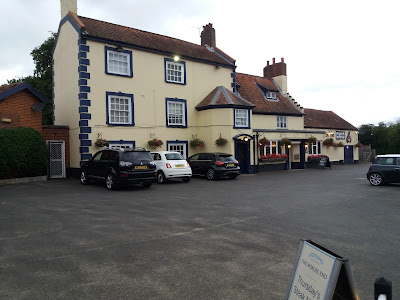 Mulbarton was also considerably larger than I expected, and there were a couple of new housing developments taking place. I noticed that some of these new dwellings were constructed in a Flemish-style, with those Dutch-looking gables which are quite prominent in parts of East Anglia. There is a reasonable sized Co-Op in the village, along with a separate Post Office and convenience store. The impressive, flint-built parish church is the other side of the expansive common area, and it is here that the World’s End pub is situated.

The pub dates back to the 1600’s, and in its time was an important Coaching Inn.  It has obviously been enlarged over the years and today offers fine locally sourced food and drink, along with bed and breakfast accommodation. Adnam’s are the owning brewery, and on entering the spacious main bar, I noticed Ghost Ship and Regatta on sale alongside the staple Southwold Bitter. 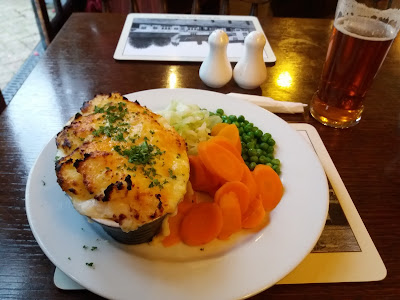 I opted for the Ghost Ship, which was in good form (3.0 NBSS), but rather pricey. £4.20 seems more like London prices than what one might expect for rural Norfolk. All the same, I had two pints along with a rather delicious fish pie which was every bit as good as the description on the pub menu.

There were various groups of diners seated in various strategic positions, but I managed to find a table close to the door to the attractive and well-laid out rear garden, where my eardrums wouldn’t be overwhelmed by other people’s conversations. There is also a games area at the far right of the pub, which seemed quite well used. The pub seemed quiet for a Friday evening, and I heard the manager remarking to his colleague behind the bar, that it was a bit of a contrast to the previous week.

Obviously the unseasonably cool weather, we are experiencing at present, hadn’t helped trade, and having to walk back in the pouring rain didn’t really help me either, but I arrived back at the cottage in one piece. I hung my trousers up to dry, although they were still a trifle wet the following morning. I slept like the proverbial log, until being wakened some time after 6am by the rather noisy chickens, in the coup at the end of  the garden.

I enjoy the detail, Paul, and the fact you get to review a pub I've never been to(though I used to go to meetings at Ketteringham Hall back when).

Beer prices in Norfolk constantly surprise me, seemingly 50p higher than in Suffolk. And beer quality rarely that great. That pie looks good though !

RM is right as usual. I too love the level of detail you give in these posts. Really looking forward to the Butt & Oyster Inn post. I have always wanted to visit that pub.

I always considered Suffolk to be the posher of the two counties Martin, although beer prices might suggest otherwise. There does seem to be lot of development taking place in Norfolk with much new housing being built.

Glad you both enjoyed the post. I have nearly finished the one about the Butt & Oyster, and should have it up on the site tomorrow (evening).

Great but this is awesome Travel Info!