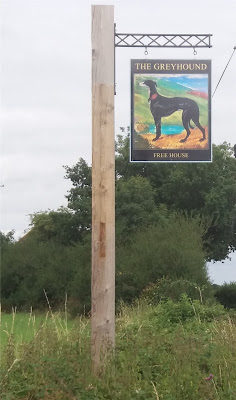 Some good news to brighten up your Monday morning. The Greyhound at Charcott, which was closed back in January by owner Enterprise Inns and earmarked for conversion to a private dwelling, re-opened for drinkers on Saturday afternoon.

Regular followers of this blog will be aware that the pub had been bought from Enterprise, by local couple Richard and Fran Gilliat-Smith  back in April. The pair have spent the last 3 months carrying out an extensive refurbishment, and in some cases a restoration, following years of only basic maintenance by both Enterprise and previous owners, Whitbread.

Most days, my regular lunchtime walk takes me past the Greyhound, and judging by the number of builders skips outside the pub, plus the number of different tradesmen’s vans, it was fairly evident that the refurbishment was going to be very thorough.

On Sunday my son and I walked over to see for ourselves. We caught the train from Tonbridge to Leigh; calling in at the village shop to pick up a few bites to eat on the way. The Greyhound is only open for drinks at the moment, as further work is still required on the kitchen. Richard and Fran plan on having the kitchen open by the middle of next month, once the work is complete and they have found a suitable chef. 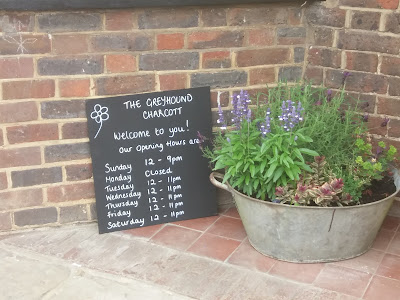 Our walk took us through Leigh churchyard, from where we picked up the path which skirts the perimeter of the Hall Place estate. Unfortunately, as the path turned into an area of woodland, we found the massive trunk of a recently fallen oak tree blocking the way. With a fence on the one side,  and dense undergrowth on the other, we were forced to make a detour, but with the aid of  an OS Explorer Map, this was not a problem, and some 90 minutes after leaving Leigh, we found ourselves in Charcott. 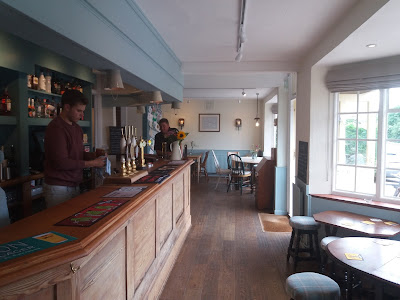 We were both looking forward to a pint when we reached the Greyhound, and after stopping briefly to say hello to friends Jon and Claire who were sitting outside, entered the pub. I must say the new owners have done an excellent job on the place; the bar counter and floorboards have been stripped back to reveal the natural wood, whilst the walls have been painted white, above a lower half of pale blue. The Greyhound always had a bright and airy feel to it, and the colour scheme has really enhanced this. 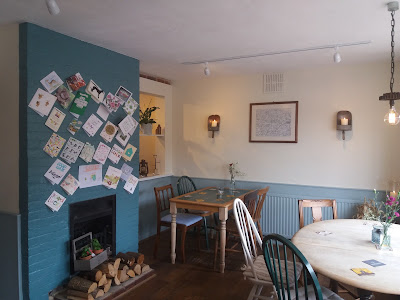 To tempt us there were three cask ales on the bar, in the form of Larkin’s Traditional, Tonbridge Blonde Ambition alongside Dark Star American Pale. I opted for the latter, whilst son Matt was tempted by a pint of the recently re-launched Hofmeister. The 21st Century version is a far cry from the ersatz lager brewed by Courage back in the early 1980’s.

Brewed at an unnamed brewery in the heart of Bavaria, using natural mineral water and locally grown barley and hops, the new Hofmeister Helles Lager is a vast improvement on its 80’s namesake. Matt is too young to remember the original, but I am not, and after trying the beer for myself, pronounced it genuinely Bavarian.

We took our drinks outside, and sat down with our friends. There was a good churn of customers, with the numbers slowly increasing as the afternoon wore on. Being a country pub, the Greyhound is dog-friendly, which was just as well when several people pitched up with their hounds in tow.

The garden at the side also appeared popular with families, and when landlord Richard, fired up the barbecue, there were hot dogs and burgers for all who wanted them; on the house!

Our friends departed shortly before  3pm, but Matt and I stayed for another. This gave me a chance to try out the rather quirky gents toilets, with the urinals fabricated out of converted milk churns. I also managed a brief chat with Fran, who was obviously pleased with the way the pub has been received during its first couple of days being open. She  remarked that I’d now be able to pop in for a drink at lunchtime, instead of furtively peering through the window.

Just before we departed, we were joined at our table by the couple who run the nearby bed-and-breakfast establishment at Charcott Farmhouse. They were really pleased that the Greyhound has re-opened, as not only does it mean they have their local back again, but as soon as the kitchen reopens, they have somewhere close by to recommend their to guests for an evening meal, or simply just a few pints of locally-brewed beer. 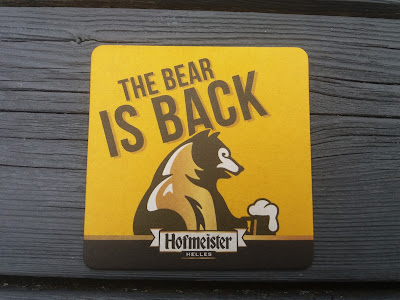 I am also pleased to see the Greyhound open once more, and I’m certain it will do well under its new owners. The only thing is I might have to vary the route of my lunchtime walk, otherwise the pub could prove a trifle too tempting!
Posted by Paul Bailey at 22:10

New style urinals seem the be the current fad. I have seen some that were converted from kegs. Quite tasteful. Not sure I need it, but it is kind of funny.

A bit gimmicky I grant you Dave, and I also wonder how easy they are to clean, but on the other hand, a talking point as well.