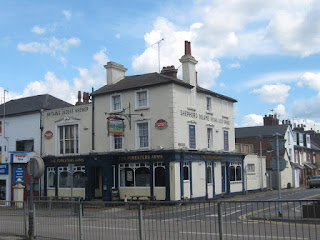 Well it’s not often that I’m forced to eat humble pie, but I certainly was last Monday evening. My local CAMRA Branch, were holding one of their bi-monthly open business meetings in Tonbridge, and the venue they’d chosen was a Shepherd Neame pub. Now I’m sure regular readers of this blog are familiar with my well-known dislike of Shepherd Neame beers, but sometimes you just have to bite the bullet and go with the flow.

The pub in question was the Forester’s Arms; a Victorian local situated at the bottom of Quarry Hill, on the main A26 out of town going towards Tunbridge Wells. Now I have known the Forester’s for many years; in fact ever since I first moved to Tonbridge back in 1984. For 10 years after that, my wife and I lived just up the road from the pub and would often pop down for a drink. The Forester’s was the pub of choice for when we had friends visiting, and I would also nip in for a swift one whilst picking up a takeaway from the Chinese restaurant just a few doors down. It was run by a young couple back then, who were just a few years older than us, and they served up a good pint and kept the place in good order.

In 1994 we moved to a larger house in a different area of Tonbridge; still in the south part of the town, but the best part of 30 minutes walk away from the Forester’s. There were other pubs close by, but by that time the pub had changed hands and Shep’s beer had taken a definite turn for the worse. More to the point, with a young toddler to look after, an increased mortgage and a daily commute to work of 30 miles each way, there wasn’t much time, or money for pub-going.

I continued for a while to keep an eye on what was going on with the Forester’s, but the pub seemed to go through a succession of different landlords, and eventually ended up with a bad reputation. For the last 10 years I have driven past the pub on my way home from work, and seen a regular stream of banners proclaiming a new licensee and a brave new world but the latest one, back in April, seemed a little different.

There was the usual skip parked outside and the notices advising “closed for refurbishment”, but the appearance of a fence and some plants, on the narrow strip of land in front of the pub signified that perhaps this time round, change was in the air.

Not long afterwards, a splash in one of the local papers showed that experienced pub manager Tyson Marshall, had taken over the running of the pub. I recognised his photo straight away, as Mr Marshall had managed the Little Brown Jug in Chiddingstone Causeway, just up the road from where I work, for a number of years. Having explored several sites including pubs in the area he recognised the potential to revive the fortunes of the Foresters Arms

Originally from Melbourne, Tyson has extensive experience in the hospitality trade, having worked in bars all over the world since the age of 20. Speaking in the local paper he said, "I am passionate about bar tending, and it has been a dream of mine for several years to have my own place. When I found the Foresters Arms, it seemed perfect. It had lots of potential, and is in a fantastic central location, with Tonbridge station within a short walking distance."

Since getting the keys to the Forester’s back in the Spring, Mr Marshall got busy giving the pub a fresh coat of paint and other improvements, including the aforementioned outdoor seating area. He went on to say, "My aim is to make the pub a friendly and comfortable place where people of all ages feel they can relax, so I have put artwork on the walls to generate conversation and interest, and introduced more games. I want to get people talking and interacting."

The pub already had bar billiards, a darts board plus a pool table, and now table football game and a wide range of new and vintage board games have been introduced for people to play. Food, in the form of authentic pizzas, baked in a specialist oven, and featuring a variety of toppings, is available anytime the pub is open. Pizzas can also be ordered to take away.

Tyson added: "Changing the food offer is part of my overall aim for the pub, to keep things simple, and execute them really well. After years talking about it, it is awesome to finally be my own boss, and Shepherd Neame have been great, working with me to help fulfil my dream”.

I remained totally unaware of these changes until a couple of Fridays ago when, whilst out on our Tunbridge Wells Circular walk, my friend Don told me how good the pub was now and that it was well worth a visit. So, with the West Kent CAMRA branch business meeting providing the perfect opportunity for a closer look, I walked the relatively short distance down the hill to the Forester’s.

The place was heaving when I arrived, but I could see my friends sitting at a table on the bench seats adjacent to the window. I ordered myself a beer (Whitstable Bay Pale, served in a dimple mug), and went and joined them. I wasn’t that interested in the business side of the meeting, especially as I had difficulty in hearing much of the conversation due to the level of background noise. I did enjoy the beer though; much to my surprise!

Actually, I have drunk and enjoyed Whitstable Bay Pale before. It is definitely one of Shep’s better beers. Also on hand-pump were Spitfire and Samuel Adams Blonde Ambition. The latter is a collaboration brew between the Boston Beer Company (owners of the Samuel Adams brand), and Shepherd Neame, and is brewed to commemorate American Independence Day. This was rather appropriate as our meeting took place on 4th July, but as I was enjoying the Whitstable Pale I didn’t try any.

As I mentioned earlier, the pub was busy, with a good mixed crowd, and for a Monday night this was good to see. Keeping an eye on things from behind the bar was the larger than life character of Tyson, who looks every bit the archetypal Aussie surf dude. He must be very pleased with the way things are going, and it is good to see his efforts at turning the Forester’s round are proving successful.

The meeting ended shortly before 9.30pm. Most of those present decided to head off to the Humphrey Bean (JDW), but two other members and I were happy to stay put. I certainly didn’t want to walk down into the town, only to have a much longer walk back. The clientele changed a bit around this time, with a younger crowd turning up, but one which was happy to sit there playing board games!

I had one final pint of Whitstable Pale before leaving; making three in total. I must say I am extremely pleased to see my old local busy and thriving; especially now that it’s become a pleasant and attractive place to drink in.

Glad to see you enjoying Sheps Paul ! Clearly you know it better than I do, but I've really enjoyed their standard beers, generally in GBG pubs to the east.

Martin, I understand Shep’s have a pilot plant within the main brewery, which is used for the production of small-run beers and one-off “specials”. I’m not certain whether ii is used to brewed Whitstable Bay Pale, but the latter is a pretty good drink. Btw, I scored the pints I had in the Forester’s the other night at 3.5 NBSS.