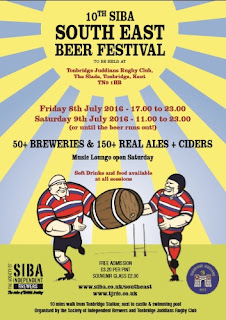 This weekend saw the annual Tonbridge Juddians – SIBA South East, Beer Festival taking place.This is now the 10th such festival to take place and, as in previous years, the event took place in a spacious marquee erected in front of TJ’s clubhouse.

My son Matt and I headed down there on Friday evening and met up with his cousin, her partner plus their two dogs. Because of the hounds we sat outside but, unlike previous years where it was necessary to either bring your own folding chair or sit on the grass, this year the rugby club had fortunately supplied chairs.

It was a fine summer’s evening, although it did get a little chilly later, and it was very pleasant sitting out watching the sun slowly sink behind the trees at the fringe of Tonbridge Sportsground. There were 186 different cask ale from 74 different brewers, to sample; all entries in the SIBA South East Region Competition. The tasting and judging of these beers takes place during the day, on Friday, and I do know several people who volunteer as judges each year. 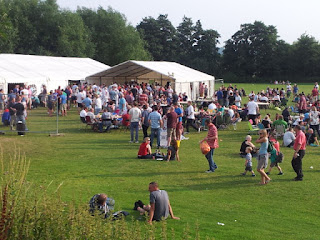 This is a little too serious for me, as I prefer to drink and enjoy my beer, rather than analyse it, but it is obviously good for the brewing industry as a whole, and SIBA in particular, that these types of competition take place; especially as they help to raise standards. Tonbridge Juddians Rugby Club provides the venue and the facilities and then, once the judging has finished and the winners announced, the festival is turned over to the club, and the paying public are admitted.

The place was humming when Matt and I arrived, but as the majority were sitting outside enjoying the fine weather, there was plenty of space inside the marquee and ample room to move about and peruse the rows of different casks. There were eight different categories, but I won’t bore you by listing them all out. All beers were priced at one token per half pint, which certainly made life easier for the mathematically challenged amongst us.

I didn’t go overboard on the sampling, but I enjoyed most of the beers I sampled and the ones which really stood out were: Five Points Brewing Co. Five Points Pale 4.4% and Railway Porter 4.8%, Brighton Bier Co. South Coast IPA 5.0% and Black Cat Tzar Imperial Stout 6.8%. 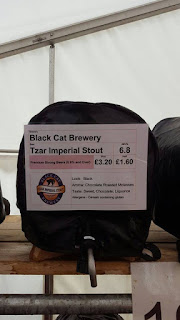 I finished on the latter, and found it a truly excellent beer; not overtly strong, but packed with loads of flavour. I believe it picked up an award in the Premium Strong Beer category. Both the Five Points beers were also excellent, and I’m pretty certain I remember beers enjoying from this Hackney - based brewery at last year’s event.

Matt’s cousin and her entourage left as dusk began to fall, so Matt and I headed inside where we met up with a few of my friends from West Kent CAMRA. The branch runs a small stall every year, handing out leaflets, membership forms as well as selling pub guides and similar publications. There had been some interest and quite a few guides had been sold. It was good to notice that quite a few casks were already stooped at a steep angle, showing that some were starting to run out.

I called in again, briefly, on Saturday afternoon, but confined my supping to a few swift halves, as my wife and I were going to a party in the evening, and I would have to drive. I would estimate there were more people present than on the previous evening, with many sitting outside. There were a number of live acts lined up, to entertain the crowds. I noticed that some of the casks had indeed run out; which is good news for the organisers. 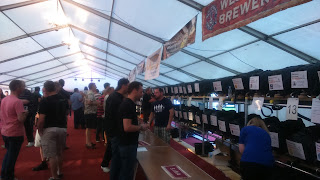 Unlike previous years though, the festival will not be open on Sunday. This is understandable as the rugby club relies on its members and volunteers not just to man the bars and serve the beers, but also to take the whole thing down at the end. With all the cooling equipment necessary to keep the beer in tip-top condition, as well as the nearly 200 odd casks to remove, the whole operation is not only time consuming, but requires plenty of bodies to help. The Sunday finish has always meant members taking time off from work at the start of the new week, so I can fully appreciate why this session has now been abandoned.

As always it was a great festival, and is an event which has now become firmly fixed in the Tonbridge social calendar. The only slight gripe was there were no programmes this year; just a printed list of the beers. I heard that this was due to problems with one of the sponsors, but whether this is correct remains to be seen. Many people were asking for them and the guidance provided by the tasting notes in particular, was sadly missed. However, I am certain the organisers will address this for next year’s event.

I would like to end by thanking Tonbridge Juddians, and all their hard-working volunteers, for once again, putting on such an excellent and highly enjoyable festival, and also raise my glass to all the brewers who are members of  SIBA South-East  for providing such a fine range of beers.
Posted by Paul Bailey at 10:48