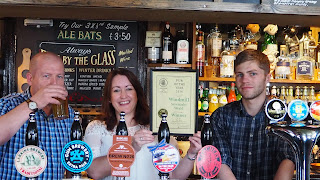 For the third year running, the Windmill at Sevenoaks Weald has won our local CAMRA Branch Pub of the Year award. The award reflects the hard work licensees Matt and Emma plus their team have put in over the past year to ensure customers receive the best possible pub experience. As in the previous two years, a group of branch members visited the pub to present the award, and this took place last weekend.

Whilst the majority of our party travelled to the Windmill either by bus, or by car, five of us walked over from Hildenborough station. The route we took was along country lanes to begin with, but before long we left the road and set off across some gently undulating countryside. We followed the same footpaths we had taken last year, although a look back at the diary shows that we were a month earlier this time round. 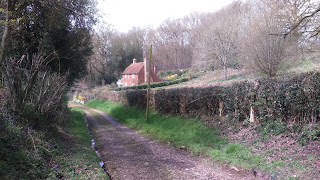 The bluebells were again in full bloom, and I imagine the mild winter had played a part in their early appearance. Like last year, I took some photos, but they don’t really do justice to the vivid blue carpet lining the banks on either side of our path.

It was much muddier underfoot this year, and we had to pick our way through some boggy conditions in a number of places. We skirted the local golf course before descending down a track past a couple of isolated cottages. We then walked through some thicker woodland (and more bluebells), towards railway line, where we crossed under the tracks by means of a narrow pedestrian underpass. 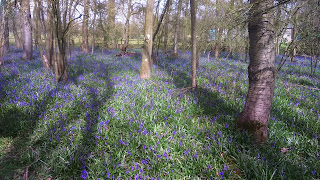 After crossing a couple of fields, we came out onto the intriguingly named Egg Pie Lane, but not before having to negotiate the wettest and muddiest spot on the entire walk We passed a riding stables, and then a farm before reaching a T-Junction, and turning right into the equally intriguing Scabharbour Road.  Some fifteen minutes later we arrived at the Windmill keen to see which beers were on offer in order to quench our thirst.

The pub was busy with diners when we arrived, so some of us decided to sit out in the garden and make the most of the sunny weather. Before doing so we grabbed ourselves a beer. My first choice was Gun Extra Pale; a well-hopped 3.9%, light-golden coloured beer, which was just the sort of thirst-quenching beer I needed after my walk. Gun Brewery beers are un-fined, but mine only had the faintest of hazes. The brewery are based deep in the Sussex Weald, to the north-west of Hailsham, and pride themselves on “small batch beers”, which are big on taste. This is the second time this year I have enjoyed this beer, and I thoroughly recommend it to all concerned. 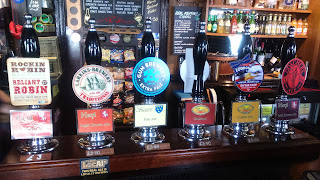 We moved back inside shortly afterwards, as our pre-booked table had just become free. There we joined the rest of the group. What with various people coming and going, as not everyone was eating, we must have numbered around a dozen members and friends all told. My second pint was Goacher’s Dark, a 4.1% full-bodied bitter, which is quite dark in colour due to the incorporation of a high proportion of crystal malt in the mash. Billed as “The original Goacher’s Ale”, this was the first beer the company produced, when they started brewing back in 1983. It was another fine beer, and one which I knew would go well with my dinner.

We had a bit of a wait for our food to arrive, as the pub was rather full that day and the kitchen kept very busy, but it was worth the wait as my fish pie was very tasty indeed and packed full of cod, salmon and prawns. The period waiting for the food to arrive, also meant more time for drinking and chatting, but once we had all been served and were tucking in to our food, it was amazing how quiet our two tables became. 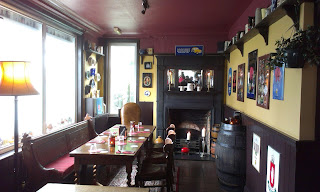 I moved up a notch for my third beer. This was In Yer Face; a 5.8% limited edition, American Pale Ale from Oxfordshire based, Loddon Brewery. The beer was aptly named, as there were hops aplenty ready to jump out at you and, like the previous ale, this too went down well with my meal.

I didn’t have room for a sweet, and besides I was ready for another beer. The rarely seen Goachers 1066 Old Ale fitted the bill nicely. Named after the beer’s original gravity, this rich and fruity 6.7% barley wine strength ale has been brewed by Goacher’s, in small quantities every winter since 1983. It was the perfect beer to finish on; dark mahogany red in colour, with a fine mellow taste to it, reminiscent of Madeira wine.

The presentation of the Windmill’s certificate took place shortly after; with the obligatory speeches and photo opportunities. The award was richly deserved though, demonstrating how attention to customer service and providing an all-inclusive atmosphere have paid off for this reborn village pub. 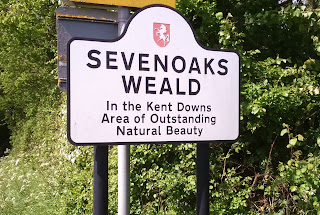 We left some time after 6pm. We were down to just four for the walk back, as one of our party had accepted a lift home to Leigh. Our route back to Hildenborough station was along the lanes, rather than cross-country, and basically it involved heading down Scabharbour Road, Egg Pie Lane and then into Philpotts Lane.  I’m sure I remarked on this last year, but there are some really impressive and, at times, quite stunning multi-million pound properties tucked away down these lanes, and we all wondered what sort of people possess the money necessary to buy such places.

There was a 15 minute wait for our train back to Tonbridge, but this gave us time to rest our feet, and catch out breath. As I have said before, do give the Windmill a try if you are ever in the area. I promise you won’t regret it.
Posted by Paul Bailey at 23:08

I really don't want to be churlish, and from your description the Windmill sounds a great pub.

But does it really give a good impression if the same pub is chosen as Pub of the Year for several years in a row? It might deter other contenders, and give rise to the view that one particular pub is the "branch favourite".

And this year we gave the award to a Sam Smith's pub with just the single cask beer!

I understand what you say Mudge, and strangely enough I am writing a piece about Pub of the Year, and how, my branch, goes about choosing the winner. Looking back over past winners, a pattern emerged quite early on in the history of the competition, whereby most winners go on to claim the Pub of the Year award for two or three years running. When a winner is eventually toppled, it is often hard to determine exactly why. Has the pub concerned become complacent and allowed standards to slip? Has an even more worthy winner crept up from behind to claim the crown? Or have people just become bored with the same pub winning year after year?

It does appear that natural selection ensures that whilst a pub may win the award several years on the trot, no pub hangs onto it for ever. In our case it doesn’t deter contenders, (as far as we know), because the short-list of pubs is drawn up each year by members, rather than pubs nominating themselves.

I do agree that it can look like a particular pub is regarded as the "branch favourite", and we have heard this accusation on a number of occasions. However, if we automatically preclude the previous year’s winners from being considered, then we are not operating a level playing field, and a pub may feel that it has done everything right, only to find itself excluded from the contest purely for being the best.

A difficult choice, and although I can abdicate a certain degree of responsibility by no longer being on the branch committee, I stand by our current policy. The alternative is akin to the “positive discrimination”, adopted by a number of organisations or political parties, whereby candidates from certain minorities are put forward solely on the fact they belong to a minority, rather than being selected purely on the basis of merit.

Reading this the first thing that came to mind was " how refreshing to see the best pub awarded POTY in successive years" and then I read Mudge's comment. Rare that I disagree with Mudge !

Stockport CAMRA use their awards as an effective campaigning tool, promoting brewery-owned pubs including Sams and Holts who maintain high standards without massive ranges. I was particularly pleased to the Boars Head win POTY.

The Windmill is a fantastic all-rounder, and I'm sure Kent would like to see it get a crack at National POTY, which presumably it couldn't if branch awards rotated.

Rotation of pubs in the Beer Guide for reasons other than quality is a bigger issue though.