In this concluding part of my tale about the London Pub Crawl a friend and I undertook 40 years ago, we catch up with the pair of us snoozing in Hyde Park, after a rather heavy lunchtime session. With just two pubs to go I look back and reflect on how awful the first beer of a renewed session always tastes, after an enforced afternoon break!

"Six or seven pints is enough for anyone at lunchtime, and would absolutely slaughter me today, but when you're 19 years old, with  the world still at your feet, you can abuse your body in this fashion from time to time and get away with it! We adjourned to nearby Hyde Park for a lie down on the grass, to sleep off our surfeit of ale. Presumably we also ate at some stage during this interlude, although I don't recall anything about this.

I obviously don’t over-indulge to such an extent these days, but I do remember similar past occasions, before the advent of all day opening. The trouble is when you start drinking again the first pint always tastes atrocious. If you have been asleep as well, this effect is exaggerated, and the first pint will taste doubly foul. Whether that was the case back then is lost in the mists of time, but after waking up, we caught the tube to South Kensington and found our way to the Queen's Elm; a Courage pub, known for its literary connections.

My friend and I were used to Courage beers as our home town of Ashford was rather awash with that particular brewer's ales. However, the chance to sample them in their "real" form was a rare treat, as all our local Courage pubs used top-pressure as a means of dispense. We had another reason for visiting the Queen's Elm; namely the opportunity to sample Courage Directors, a beer which was extremely rare in any form, and rumoured to be on the verge of extinction. Unfortunately this legendary ale was not on sale when we arrived at the pub, so we were disappointed in that respect. According to CAMRA’s first (1974) Good Beer Guide, real ale was re-instated at the Queen’s Elm, “By popular demand; aided by a boycott”. The Guide also described the pub as “Basic and smoky”.

We were not disappointed with the Queen’s Elm, and I don’t remember it being excessively smoky. It had bare wooden floors and was decorated with a large collection of pipes mounted on the wall. Unfortunately this attractive old pub ceased trading in the 1990’s, and has now been divided up into a number of retail outlets. The artists, writers and actors who at one time or another frequented the pub; luminaries such as Laurie Lee, Francis Bacon and Richard Harris, would be turning in their graves if they knew that the Queen’s Elm is no more.

Whilst in the pub, we sat at the bar, planning our next move, which was to be a short walk up the road to the Anglesea Arms. The Anglesea was probably the first free house in London to capitalise on the growing interest in "real ale", by offering a selection of beers which could not be found anywhere else in the capital. It was certainly a pioneer in this field, leading the way where others could only follow. 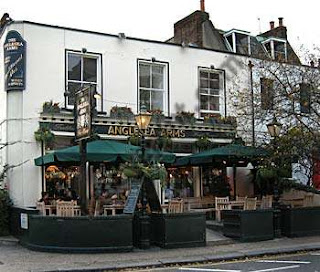 The Anglesea Arms became a regular place of pilgrimage over the next few years and, certainly during my student days, no visit to the capital was complete without a trip to South Kensington in order to see what was on offer there. To walk in through its doors and be greeted with a new set of pump clips was always a pleasure.

Eventually, other London pubs followed suit and the capital became awash with ales from all parts of the country. Possibly for this reason I began to frequent the Anglesea less and less, eventually stopping altogether. I made a point of visiting the Anglesea on a trip to London, a few years ago. The pub remained unspoilt, and the splendid old mirror, advertising Thomas Salt & Co.’s Pale Burton Ales, was still hanging on the wall. There was a selection of comfy chairs to sink into and, of course, the famous outside terrace, scene of many a happy summer’s evening spent enjoying fine ale and good company.

Back in 1974, my friend's guide informed us that the Anglesea Arms had a good selection of hand pumped ales available, including the revered Abbot Ale from Greene King. It was this latter beer that we were particularly keen to sample. Because of the constantly changing variety of beers on offer I am unable to remember which particular beers were on sale at the time of our visit, but I do remember, that Abbot Ale was not on tap that particular day. As it was a warm summer's evening we sat outside in order to enjoy our drink. We hadn’t been there long before my friend got it into his head that we should drink up and take the tube up to High Barnet where, according to his guide, Greene King's one and only London tied house was situated. There we would finally be able to try a pint or two of Abbot Ale!
Time though was marching steadily on and, even in my rather inebriated state, I reckoned that the time necessary to make the journey to this unknown part of London, plus the time it would take to find the pub, would take a good hour or more. On top of this we would probably end up spending at least a further hour in the pub. This, coupled with our return journey to central London, would almost certainly lead to us missing our train back to Kent.

My father was due to collect us from Ashford station that evening. I was certain that he would not appreciate turning out after midnight - even assuming we managed to catch the last train home. In addition, both my friend and I were due at work the following day (we were working as cleaners at a local hospital). My companion took a little more convincing than myself of the folly of his plan, but after a further pint he agreed that our best course was to drink up, make our way via the District Line, to Charing Cross and then take the train back to Kent.

When I finally reached home, I collapsed into bed - the day's excesses having finally caught up with me. Both my friend and I made it into work the following day, although I had the most horrendous hangover imaginable! It was a splendid day out though, and the trip definitely wetted my appetite for further such visits. My interest in exploring the pubs of London had thus been awakened in a big way; an interest which I am happy to say remains to this day."
Posted by Paul Bailey at 21:39

As ever, it's the detail and anecdotes I enjoy Paul. On food, I doubt you'd have been able to afford to eat in London in the mid '70s !

Quite a contrast between Greene King then and now. I remember my drinking at that age (19/20) being almost exclusively IPA and it being well regarded by local CAMRA.

I’m pretty certain I would have grabbed a sandwich from somewhere, Martin. Even back then I never liked to drink on a completely empty stomach.

Greene King were a well-respected regional brewery back in the mid-70’s. I have vague memories of the same friend taking a couple of other friends and I to a Greene King pub somewhere in Essex. This was the previous summer, when we had all just left school and were staying at a holiday let, owned by his aunt, in Clacton. It was a bit of a lad’s holiday, with beer featuring pretty high on the menu.

We also travelled out to a Tolly Cobbold pub on those tricycles where two people sit side by side. I don’t know what they are called, but you used to be able to hire them at seaside towns.

In case you hadn’t gathered, my friend was a bit of a beer buff!