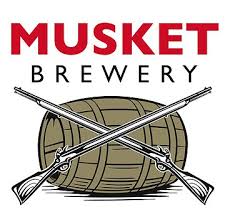 Last Thursday, Barry Dennis, the inimitable landlord of the Anchor in Sevenoaks, held another of his “Meet the Brewer Evenings". As the name of these events implies, the evening revolves around a brewer, normally a fairly local one, who gives a short presentation about his or her company, and the beers it produces.

At the same time, Barry will have one or more beers on tap, from the brewery concerned. There is normally a short question and answer session at the end of the presentation. As can be imagined, these evenings are popular with both the Anchor’s loyal regulars and occasional visitors, like me. Thursday’s presentation had a particularly relevance as far as I was concerned, as the brewer giving part of the talk was an old friend of mine.

Musket Brewery is a microbrewery based at Loddington Farm at Linton in the heart of the Kent countryside. It started production in October 2013 producing a range of cask ales using the finest malts and Kentish hops and now sells to more than 115 pubs and clubs throughout Kent.

Musket director Tony Williams and his wife, Linda were present, with Tony talking about how the brewery started, the premises and the type of brewing plant equipment used, but the presentation on the actual brewing side of the operation was given by their head-brewer, Nigel Deas.

I have known Nigel for the past 30 years, since I first met him at an MMK CAMRA meeting, shortly after my then wife and I had moved to the area. In April 1981, Nigel  and I travelled up to Durham for our first CAMRA National AGM, and in the summer of that same year we went out on a couple of beer collecting expeditions; picking up casks of beer from breweries in Dorset and the Thames Valley for the 1981 Maidstone Beer Festival.

These expeditions were back in the days before the advent of Beer Agencies, when it was necessary to go to the brewery itself in order to pick up beer. On one trip we visited Palmers down in Bridport, and then called in at Hall & Woodhouse, in Blandford Forum, on the way back. The second trip saw us collecting beer from Brakspears, in Henley-on-Thames, and Whitbread subsidiary, Wethered’s of Marlow.

I mention these trips because we were both interested in breweries, and were passionate about beer. Nigel had developed this passion further and had become a dedicated home-brewer; turning out some excellent and highly quaffable full-mash brews. He was later able to apply his skills further by working full time as a brewer; initially for Goachers in Maidstone and later for Larkin’s out at Chiddingstone.

It was only natural then that Tony and his business partner, Mark Stroud should select Nigel to be their head brewer at Musket. I only found about the presentation at the Anchor the night before, thanks to social media, so forsaking my own branch’s social in Tonbridge, that same evening, I took the train over to Sevenoaks to catch up with Nigel, and with Musket Brewery. Nigel’s wife, Christel was also there, and it was nice to spend some time chatting, as I hadn’t seen her in ages.

As I said earlier, Tony and Nigel covered the presentation between them, but for the technically minded amongst you Musket brew on a five barrel plant, using pre-crushed malt, obtained from Crisps Maltings, whole leaf hops and dried yeast. Their site is a converted building which was once used to grow mushrooms. Five standard beers are brewed, ranging from a pale ale, right up to a porter, with a best bitter, a dark and a golden ale in between. Nigel told us that they will be shortly launching a mild; in fact he had brewed the beer that very day. 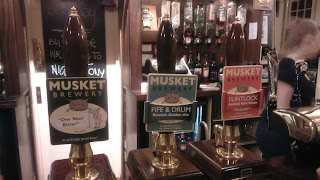 There were three Musket beers on at the Anchor that night - Fife & Drum, an easy drinking 3.8% golden ale; Flintlock, a darker 4.2% Best Bitter and One Shot Bitter, 4.0% ABV. The latter is a “house beer”, brewed specially for a local free-house. My personal favourite of the three was the Fife & Drum. In case you hadn’t already realised, all the beers have a “musket” theme, but for further information, check out the brewery’s website here.

Thanks, as always to Barry for setting up this informative, enjoyable and, for me, nostalgic evening.