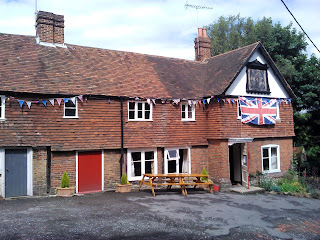 I am pleased to report that the CAMRA National Inventory listed, Old House at Ightham Common is alive and well. It was certainly busy when I called in at lunchtime today, and with a fine range of beers on offer, and customers in both bars, it was definitely worth my stopping by.

I don’t often get over that way; even though Ightham Common is only about eight miles drive from my house; but this could all change. Our son has recently started dating a girl who lives in nearby Ightham village. She has a car, but he doesn’t; in fact he has yet to book himself some driving lessons, let alone take his driving test! The upshot of this was dad’s taxi had to run him over to Ightham at lunchtime, and with the time being just after 1.30pm, it seemed an ideal opportunity for me to make a slight detour on the way back and see how the Old House was doing.

I noticed a number of racing bikes lined up against the wall when I arrived, but there was only one other vehicle parked outside. I think this 4 x 4 belonged to the landlord, who was sitting outside, having a crafty cigarette. I said hello, and made my way inside; choosing, as always, the left-hand public bar, which is the larger of the two bars. 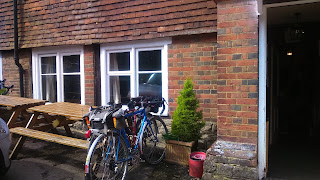 The owners of the bikes were sat in the adjacent saloon, all looking very professional in their black and yellow cycling gear. There were four or five of them, all looking older than me, but much fitter and leaner. They were all drinking pints, but as I’ve heard beer is isotonic, it was probably just the right drink to replace lost body fluids after all that exercise. I later discovered they were from the Sidcup area, and from their conversation, they appeared to be real ale enthusiasts, or possibly fully paid upCAMRA members.

There were a couple of old boys, dressed in their Sunday best, sat at the bar in the public enjoying the plate of sausage rolls and scotch eggs laid out on the counter. They acknowledged my presence and shouted for the landlord, but as he had already seen me, he soon appeared on the scene. I can’t remember all the beers on sale, but I did see Harvey’s Best, Dark Star Cappuccino plus a Red Ale whose name escapes me, Titanic Bitter, Mr Swift’s Pale Ale from West Berkshire Brewery, plus Oakham Inferno.

It was a toss-up between the latter two, but with the landlord recommending the Inferno, I went with that. It was pale golden in colour and bursting with citrus flavours from the North American hops used in the brewing. I had quite liked the sound of the Mr Swift’s as well, but as I was driving I wisely limited myself to just the one pint. 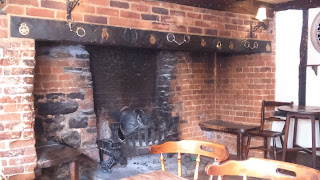 The public bar began to fill up soon after my arrival. Everyone seemed on first name terms with both each other and mine host, so they were obviously all locals. I was offered some sausage rolls, which went well with the beer, as did the peanuts on the bar. It was a nice fairly warm spring day outside, so the door had been left open.

The cyclists filed in from the other bar for refills (thirsty work riding up and down all those hills between South London and Ightham!). Most opted for the Cappuccino, although Titanic also seemed a popular choice. In contrast, the regulars were drinking Harvey’s, to a man, but Sussex Best is regarded as a “must stock” beer in this part of the South East, so this wasn’t surprising.

As I said, I restricted myself to just the one, secure in the knowledge that, providing the romance lasts, I’ll be making a few more trips over to Ightham. It was good to see the Old House nice and busy, and I thoroughly recommend a visit if you ever find yourself over that way. Just remember though that it has limited opening times, as it is something of a “hobby pub” and the landlord has a full-time job elsewhere.

As a side note, whilst sitting there, enjoying my beer, I picked up a copy of Maidstone & Mid-Kent CAMRA’s newsmagazine - Draught Copy. One of the articles was about the Rifle Volunteers, a back-street Maidstone pub, which has just been placed on the CAMRA National Heritage list as it has an historic interior of regional importance. This is just a step down from a listing for being of national importance.

I know the Rifle Volunteers well, as I used to live in Maidstone.  Back then it was a Shepherd Neame tied house, but more recently it has belonged to local brewers, Goachers. It is well worth a visit, but check it out first, either on WhatPub, or here on the National Inventory website.

Good to hear of your positive experience at the Olde House Paul. A lovely pub, though I thought my average pint a few years back might have reflected slightly too many beers on the bar !

Good to hear about the Rifle Volunteer, remember superb Goachers here, reminded me of a Robbies pub in Stockport. My sort of pub.

I just happened to pay a visit to the Rifle Volunteers in Maidstone on Saturday, the Goldstar and Imperial Stout were both excellent. Also visited the Cellars Alehouse (micropub) and the Thirsty Pig. It made a very enjoyable day.

I just happened to pay a visit to the Rifle Volunteers in Maidstone on Saturday, the Goldstar and Imperial Stout were both excellent. Also visited the Cellars Alehouse (micropub) and the Thirsty Pig. It made a very enjoyable day.

Yes, great pub. I remember visiting in September 2002 - I think it was a bit less in touch with the modern world back then.

The Old House has had a temperature controlled cellar, for some years now Martin, which I’m sure is reflected in the improved quality of the beer. The current landlord took over the running of this family pub, from his brother, and it was then that the improvements were put in place. Things would have been a little different when you visited Mudge.

Personally, I would still cut the number of beers, but as I have primarily only visited at weekends it is difficult to know whether the pub runs with less ales during the week, when trade can be slack, and it can sometimes close early.

Glad you enjoyed the Rifle Volunteers, Jon. I was drinking Goachers Imperial Stout, in the company of Phil Goacher himself, at the Three Tuns, Lower Halstow on Good Friday; the destination pub on the Maidstone CAMRA ramble.

I must give the Cellars Alehouse a look, the next time I’m in Maidstone; especially as it’s in one of the old cellars of the former Style & Winch Brewery. I can just about remember this massive old brewery, before it was pulled down to make way for the new Medway Bridge and the associated town-centre road scheme.